Although PC compatibility isn’t a big deal since Apple’s transition to Intel CPUs in 2006, there is a long history of PC emulation and DOS cards that let Macs run PC operating systems and software. Dayna’s MacCharlie was the first solution to the “problem” of PC compatibility. There is only one cable connecting MacCharlie to the Mac (only the original 128K and later 512K “Fat Mac” are supported), a 9-pin serial cable that goes from the Mac’s printer port to an RS-422 port on MacCharlie, which also has a pass-through printer port for Apple’s ImageWriter. 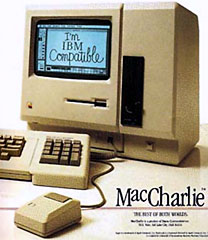 While MacCharlie has PC hardware on the inside, it uses the Mac’s keyboard, mouse, and crisp display thanks to the MacCharlie software, which also allows transfer of files between the Mac and PC. Problem is, MacCharlie only supports text, not graphics, although reports are that it had a beautiful 80 character per line monospaced font.

The beauty of this approach is that very little information needed to go from the PC side, which runsn at 4.77 MHz, to the Mac – just the ASCII code for the text on the screen.

We have no information regarding how long MacCharlie was in production or how many were sold.