1997: Can You Plug All Types of People into One Type of Computer?

That’s what Microsoft asks in its current print ads. Their answer: No. 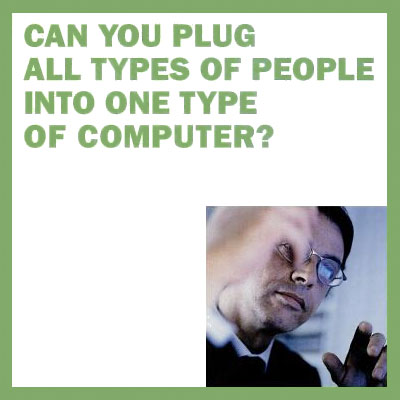 “Computers must be different to meet the different demands people have in their jobs.

“And the reason computers can be different is because Microsoft® Windows® is the same.” 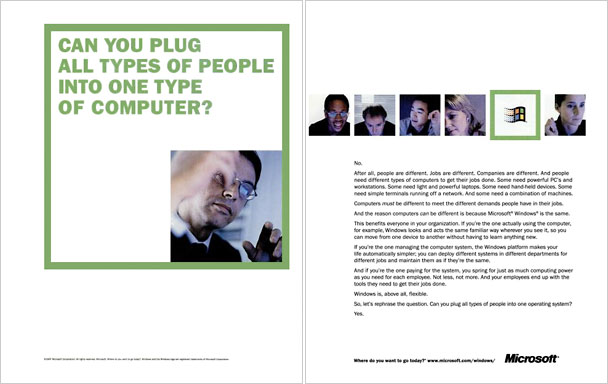 Later in the ad copy:

“Windows is, above all, flexible.

“So, let’s rephrase the question. Can you plug all types of people into one operating system?

Last I heard, there were five flavors of Microsoft® Windows® in use.

But there is a better way, the solution for the rest of us.

Even though the operating system has evolved, almost every program that ran on one computer will run on all future models and OS revisions.* And many of today’s apps will run on a lot of the older hardware – RAM, hard drive, and patience permitting. The core OS has remained the same, even with big jumps to System 7 and PowerPC CPUs.

Macs need no 16-bit emulation that keeps their CPUs from running flat out – a problem with Pentiums under Windows 95. Apple’s PowerPC Macs emulate the older 680×0 family of processors and run their software even faster than the old hardware could!

Interesting aside: To get the best performance from an Intel computer, you have to run a more efficient operating system than Windows 95, such as a Unix variant or Windows NT. The RSA Secret Key Hack reports the following results (client software has been honed for maximum performance on each platform):

Although the Pentium Pro on an unleashed operating system (Linux, Win NT) is nearly as fast as a PowerPC 604e running Mac OS, the same Pentium Pro is 36-38% slower under Windows 95.

Not only has the Mac OS remained consistent across 13 years, it also runs on the fastest personal computers on earth.

Maybe one operating system isn’t enough for you. Macintosh doesn’t limit your options.

If you want to run Windows® apps now and then or speed isn’t a big concern, you can buy emulators from Insignia (SoftWindows) or Connectix (Virtual PC) that will let your run DOS, Windows® (3.1, 95, NT), or even a form of Unix or NeXTstep as an application within the Macintosh environment.

So, let’s rephrase the question.

Can you plug all types of people into one operating system?

Yes, as long as it comes from Apple.

* Apple continued to support the “classic” Mac OS in Mac OS X via Classic Mode, which allowed longtime Mac users to continue using their legacy apps on PowerPC Macs through OS X 10.4.11 Tiger. Classic Mode was discontinued with OS X 10.5 Leopard in October 2007 and was never supported on Intel-based Macs.

This site best viewed with Verdana, a free TrueType font from Microsoft.

To answer several questions sent in response to the above line: