Apple’s adventure into the PDA market was, shall we say, less than successful. Not that the Newton wasn’t a good product; it was just a little bit ahead of it’s time.

PDAs started becoming popular in around 1998 with the Palm III.

That’s why Palm Computing came up with the graffiti system for the Palm Pilot. While you had to learn it, it was much more accurate than the handwriting recognition built into the Newton. 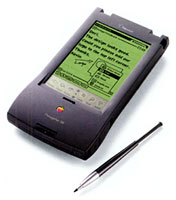 Recently I had the opportunity to purchase a Newton MessagePad 130. I thought it might be fun to play with. I’m not sure how long I’ll hang on to it, but I’d never used one before and wanted to see what it was really like.

The nice thing about it is that it’s got a very large screen, an easy to hold stylus (unlike the smooth metal one on my Handspring), and a memory card slot for expansion.

The operating system is similar to Palm’s – and there are definitely things Palm copied from Apple’s Newton OS. However the Newton is more complex and approaches being complicated. Deleting applications is not self explanatory.

The idea of “backdrop applications” (the default application that appears when you close all others) is confusing also – most computer users think of a desktop or some sort of home screen. For those who just don’t get this concept, you can download a backdrop application like Avi’s Backdrop (freeware) that acts more like what you’re used to with a desktop computer, complete with a clock, the date, a battery gauge, and even a notepad that can be hidden from view if desired.

Another oddity is the location of the close box for applications: It’s on the bottom right hand corner. It doesn’t make sense to me why it would be put there at all. The icon where the close box should be, that looks like it should compose an email message, really gives you properties for the open document.

There are other things that seem odd as well, but obviously this is the way Apple wanted it designed.

Palm, however, decided to simplify things. One backdrop application was selected, and that one allows you to open applications. Preferences for systemwide behavior aren’t hidden away, like they are on the Newton (shouldn’t the system font options be in the ‘Prefs’ application? Instead, it’s under Styles on the Newton), and the way applications behave is more consistent.

The Palm OS is definitely more user friendly, whereas the Newton OS seems to have more features (although I haven’t used anything newer than Palm OS 3.1, so a lot has probably been added in 4 and 5).

For a pocket computer, the Newton is just a little bit too big. While the large screen is nice, it’s success was definitely hampered by it’s size. Too small for a tablet PC (and that concept wouldn’t have sold back in 1996) and too big to be practical as a PDA.

Apple found an ideal spot for it though, in education, with the eMate. The problem was that it was very expensive, and computer technology in schools back in 1997 was usually limited to a lab of LC 580s or LC 5200s. The idea of a computer for every student – at their desk – wasn’t really in the mind of many board of education members, so the eMate, like the Newton, failed.

Apple probably won’t come out with a PDA again anytime soon. Palm, Sony, Toshiba, and others are already making decent ones; demand is not as high as it was three years ago; and Apple just doesn’t see a need to be involved with that market.

Apple might, however, decide to market a tablet computer if that design ever takes off. It’s an excellent design, but it’s not as popular as (I think) many companies were hoping – and I doubt Apple will want to have a repeat of the Cube, where they had a great product with very few buying it.

It amazes me that people are still using their Newton’s though – and on eBay they’re not exactly cheap, either, like you’d think they would be after 7 years. I noticed some going for over $200!

Software’s still readily available. Just do a web search for ‘Apple Newton Software’ and you’ll find hundreds of pages full of shareware and freeware for the Newton. You can up back your MessagePad to a serial port equipped Mac (like my beige G3 tower) or any PC, and I’ve heard of people doing it inside of OS X as well. Clearly, with enough people still using them to try to get the Newton working with OS X, it shows what a great product the Newton was.

If only Apple had done it about 3 years later and 3″ smaller.