Other improvements include Radeon 9600 video with 64 MB of video memory, a step up from Radeon 9200 and 32 MB of video RAM, and dual-layer support on the SuperDrive eMac. 512 MB RAM is standard, up from 256 MB, and hard drive capacity is doubled.

There is no change in price, so we’re obviously looking at increased value compared to the 2004 eMac. Tiger will take full advantage of the improved video, and it’s not bundled with last year’s eMacs, although you can order it from Apple for a pittance with your purchase of a new Mac that comes with OS X 10.3 Panther.

At the top, we have a 15% difference in price, a 13% difference in CPU speed, more RAM, more hard drive space, and the ability to burn dual-layer DVDs. Unless your budget is too tight for the new eMac’s US$999 price, it’s definitely the better buy – but the 2004 SuperDrive eMac is a good value at US$849. 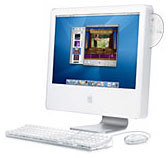 In addition to a small boost in CPU speed, the 2005 iMac also adopts ATI Radeon 9600 video, but with twice as much video memory as the 2005 eMac or the 2004 iMac G5. SuperDrive iMacs now support dual-layer burning, just like the eMac, and the SuperDrive is now 8x (last year’s iMac had a 4x SuperDrive).

The 2004 iMacs are being closed out as follows:

Here are the 2005 configurations

In two words: A steal. I’d skip the eMac completely and pick up a 17″ iMac G5 for the 1440 x 900 flat panel display. The improved CPU speed, better graphics, faster hard drive, and quieter computer are just icing on the cake.

After all, these are refurbished by Apple and have the same one-year warranty as new-in-box product.

If you’ve been dreaming of an iMac G5 – or even just wishing you could afford a 1.8 GHz single CPU Power Mac G5 and widescreen display – each one of these is a steal.