During the late 1990s and early 2000s, Apple climbed back to profitability and fame. Apple’s colorful computers put them back into the spotlight, and the iPod diversified Apple’s business successfully, bringing the Apple name to music. After the success of the iMac in 1998, Apple wanted to complete their product line by introducing a consumer laptop, the iBook. The “clamshell” iBook, as it became known because of its design, was intorduced on July 21, 1999 at the Macworld Conference & Expo in New York by Apple CEO Steve Jobs.

The iBook featured a similar design to the iMac, using colorful plastics and rubber on the outer casing for extra protection. The iBook was primarily targeted at children and students, and it included a carrying handle built into the hinge.

Like the iMac, the iBook used a PowerPC G3 processor and included USB, ethernet, and modem ports along with a built-in CD-ROM drive. Apple aired several advertisements for the iBook and used the marketing slogan “iMac to go.”

It was a commercial success. Only six weeks after the unveiling, Apple had more than 140,000 advance orders.

The iBook and iMac dramatically helped Apple climb back to fame, doubling Apple’s market share at the time to 11.2%. For the fiscal year 1999, Apple reported revenues of $6.1 billion.

Wall Street was once again interested in Apple, and the public knew that the Mac was a thriving platform. Apple’s stock price rocketed, sending it up to an all-time high.

Apple had reorganized its hardware business, but the software side was still incomplete. The Mac OS was aging – much of it still the same as it originally was in the 1980s. It lacked a modern interface and cooperative multitasking.

Features from the pink cards were left out due to staffing problems and second-system effect, and upper management ignored the problems. Apple spun the Pink project off to form a separate company and product named Taligent. However, Taligent didn’t last – it ended in the fall of 1995 when Dick Guarino, its CEO, tragically died of a heart attack. Apple management decided in 1994 that the decade-old Mac OS was beginning to look dated and required more modern features. It was also growing more unstable due to the lack of protected memory. The next-generation operating system was code-named Copland, after composer Aaron Copland.

Parts of Copland were demonstrated at Apple’s Worldwide Developer Conference (WWDC) in May 1995. A beta release was promised for the end of 1995, and a full release for early 1996. Both deadlines were missed.

Developer Release 0 was sent to a small number of selected partners in August 1996. Copland was incredibly unstable, often crashing when doing nothing at all. Members of Apple’s software quality assurance team jokingly thought it would ship sometime around 2030.

Looking Outside of Apple

The situation never improved, and Ellen Hancock was hired to get the project back on track, however she noticed that Copland would never ship. It was cancelled in August 1996.

Apple pursued Hancock’s alternative plan, to purchase an operating system from outside the company. Apple purchased NeXT for $402 million on February 4, 1997. Rhapsody was the code name for Apple’s NeXT-based operating system. It shared the appearance of Mac OS 8 (the “platinum” user interface) and included technology that was originally meant for Copland. Developer versions of Rhapsody were released in September 1997 and May 1998.

Mac OS X was first mentioned in Apple’s OS strategy announcement at the 1998 WWDC. Jobs mentioned that OS X would ship in the fall of 1999 and would inherit features from both the Mac OS and Rhapsody. OS X first shipped on March 16, 1999 as Mac OS X Server, a developer preview of what would become the desktop version of OS X. Mac OS X Beta was released on September 13, 2000, and version 10.0 was released on March 24, 2001. 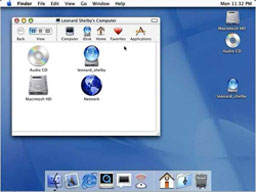 The new operating system featured a colorful new modern interface called Aqua, making heavy use of gloss effects, bevels, 3D, and shadows. Other new features included Carbon programs that could run under both OS X and the Classic Mac OS, new standard bundled applications such as TextEdit to replace SimpleText, the Dock, a new Apple menu, and many other changes.

The new operating system didn’t help Apple’s market share at first, and many Apple loyalists stuck to Mac OS 9 for as long as possible before switching to OS X. Apple has continued rapid development of OS X ever since its original release.

Apple’s most notable failure in recent years was the Power Mac G4 Cube. It aimed to combine the features of the iMac and PowerMac into a smaller package. Introduced on July 19, 2000 at the Macworld Expo in New York, it featured innovative and impressive industrial design to the credit of Jonathan Ive.

Steve Jobs said of the Cube:

The G4 Cube is simply the coolest computer ever. An entirely new class of computer, it marries the Pentium crushing performance of the Power Mac G4 with the miniaturization, silent operation, and elegant desktop design of the iMac. It is an amazing engineering and design feat, and we’re thrilled to finally unveil it to our customers.

The 8″ Cube featured a pop-up handle that was used to pull the computer out of its case (which first had to be turned upside-down), revealing easy-access to RAM slots and the AirPort Card slot. The Cube featured a 450 MHz PowerPC G4 processor, 64 MB of memory (expandable to 1.5 GB), and a 20 GB hard drive. It was priced at $1,799.

The Cube didn’t catch on; it was considered overpriced, underpowered, and too limited in upgrades. Apple sold only 107,000 Cubes in 2000, bringing in $90 million less than expected. By July 2001, only one-third of the 800,000 predicted units had been sold, and production of the computer was suspended indefinitely.

By the early 2000s, Apple had revamped both its hardware and software lines. Apple had ventured into consumer electronics in the 1990s with the Newton, Pippin, and QuickTake, all of which failed and lost money for Apple.

Little did anyone expect that Apple would diversify once again into consumer electronics.

Tony Fadell had a vision for a brand new MP3 player, unlike the ones available in 2000. He had previously worked at General Magic and Phillips. He proposed his idea to RealNetworks and Phillips, being turned down by both.

Desperate, Fadell went to Apple, and the executives there were enthusiastic. Furthermore, Apple had recently bought the rights to SoundJam MP. Fadell was hired in early 2001 and given a development team of 30 people and a deadline of one year to bring a product to market. Steve Jobs got involved in the project, taking part in frequent meetings with Fadell’s team. The MP3 player designed by Fadell and others at Apple took eight months to develop. It was to be called the iPod. In early October, Apple began to hype the new MP3 player and hinted on October 23, 2001 that it was releasing something new that was “not a Mac”.

Many thought that Apple were releasing a new Newton MessagePad.

The iPod was launched by Steve Jobs in a rented auditorium in Cupertino near Apple’s corporate headquarter campus. It was Mac-only at first, stored 5 GB of music and files, had a high price of US$399, and many disliked the scroll wheel.

The iPod shocked many, and most didn’t notice how important it was at first. Over the next few years, the iPod changed Apple, the music industry, and the world.

In 2000, Apple hired Ron Johnson from Target Corporation. Steve Jobs personally worked with Johnson on Apple’s retail strategy. Jobs was extremely keen on Apple opening stores and had been for some time.

At first, a prototype store was built inside a warehouse. Johnson decided that Apple’s stores should be spacious and large, a physical representation of the Apple brand. 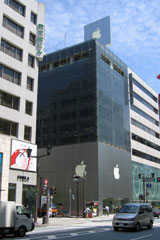 The first two Apple Stores opened on May 19, 2001 in California and Virginia, both inside shopping malls. Apple has since designated some stores as flagship stores, esspecially designed for major cities and special locations.

A main feature of Apple Stores is the Genius Bar, where customers can get free support for Apple products. Originally, customers were greeted with free bottles of Evian water, but this was dropped in February 2002 to cut costs. The Genius Bar generally supports Mac OS 9 and later, but sometimes attempts to help customers with older hardware and software as well.

Store openings have become part of the Apple cult. Mac fans line up in queue for hours, and some go as far as taking sleeping bags to sleep outside stores over-night before the opening day to make sure they get in first.

The stores have been a major hit for Apple, part of their plan to get back on top; but the best had yet to come.