In 1993, I was 11 years old. My experience with Macs had amounted to whatever time I could get alone with the Mac Plus sitting in the back of the classroom. I didn’t do much then. Mostly I would just play games like Shufflepuck Café or Where in the World Is Carmen Sandiego?

I had no clue what to do with a Mac. I didn’t understand the concept of what a computer was. Before that, I’d only known the Apple IIs that were in every school I had attended. Time with those meant marathon sessions of Oregon Trail, Odell Lake, Lemonade Stand, or Number Munchers.

All I knew was that I much preferred the full color and fun of the IIs vs. that black & white bore-box the teacher called a Mac. I’d look forward to computer day and the room full of Apple IIs we were brought to. They were for those awesome games.

Junior high brought with it a new school and a lab with a mix of compact Macs, PS-series IBMs, and whatever PC clones happened to be donated to that school. For the first time, we were introduced to formal computer classes and the necessity to learn about the history of computers and how they worked.

The computer teacher did a good job of introducing us to both platforms. I took to the DOS and Windows side first, telling myself that real computers were hard to use – that was just the way it was. The Apple machines were still somewhat relegated to game-playing status in my mind.

Over time, as I began to see how much simpler the Macs were to use vs. the DOS computers, I began to explore them more. I began to see the little nuances that made being a Mac user such a fulfilling experience back then. I delved deeper into the way the Mac OS worked and eventually found myself neglecting the DOS machines in favor of the Macs. Without knowing it, I’d become a trainee member of the Cult of Mac.

The summer of 1995 brought with it the first computer system my family brought home. It was a Packard Bell Pentium system we’d gotten at Best Buy in a special back-to-school sale.

I’d begged my parents to look into the Performas, but they insisted on having the same kind of computer as they had at work. I was crushed, but I accepted what we had. I engrossed myself in the multimedia software bundled with the system but kept going back to the bundle that came with the Performas.

Every time we went to the store, I’d sneak away to the Apple section and play with the display units. It was my escape from the blandness of a Windows life.

Then something happened that changed my life forever and thrust me full-bore into the fever that comes with seeing how good a part of your life can really be. Around this time, the infomercial Apple had made for the Performa line, The Martinelli’s Bring Home a Computer, was playing every night on TV. I found myself staying up late to watch it again and again. I was entranced by the way the style of an infomercial showed how everyone in the family could find something to love about a computer.

I began to read every Apple ad I could find. I watched every commercial I saw on TV as if they were tenets from on high. I started learning about the history of Apple, the development of the Macintosh, and how it had evolved over the years from an electronic appliance to a device that every household needed.

My parents still saw computers as tools to get something done, not as a lifestyle addition. I begged relentlessly for them to upgrade to a Performa. Their response was that if I wanted a Mac that badly, I should go get my own. I resigned myself to their reluctance. I watched as they upgraded the family computer through subsequent generations of Pentiums running Windows, even graciously accepting the fact that they’d ignored my pleas and bought me my own personal Compaq when they saw my computing needs expand in high school. 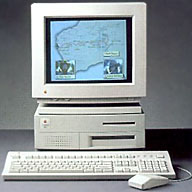 It wouldn’t be until college when I finally bought my first Mac. I found myself spending more time in the computer labs than in class. My quest to know anything and everything about the history of Apple had led me to Low End Mac. I devoured all the information on the site and, based on the “Best Buy” recommendation in its profile, I bought a used Centris 650 on eBay in 1999. It was already relatively obsolete by that time, but it was all mine.

I quickly made it my primary computer and used it for everything from writing reports and games, to (slow) Web usage. If I needed more power or wanted something a bit zippier on the Internet, I could go to the labs at school, where they had plenty of Power Macs waiting for me. Everything I did at home I could do at school. The transition between locations was seamless.

Eventually I began collecting other Macs to relive the experiences I’d missed along the way. I bought a few compact Macs and LCs, as well as the iBook G4 that has served me well for the past 2+ years. I even acquired the same laptop I’d used as editor of the high school paper, a PowerBook 1400.

I have been writing this on the old Centris using ClarisWorks 4. Even with the newer Macs I have available to me, it just seemed fitting to continue to use the first Mac I’d ever owned to tell the world how I was indoctrinated into the Cult of Mac.