In July, I wrote in Using Quicken for Mac? Read This Before You Upgrade to Lion about issues that I – along with any Mac user running an older copy of Intuit’s Quicken personal finance software – would be having when upgrading to OS X 10.7 Lion.

Briefly, Lion no longer includes Rosetta, Apple’s software that, in previous versions of OS X, allowed Intel Macs to run software created for earlier PowerPC Macs. Although all Macs have used Intel CPUs since 2006, Intuit coded all Mac versions of Quicken prior to the current Quicken Essentials 2010 for PowerPC. Moreover, the Quicken File Exchange utility included with the current version of Quicken – used to import data from earlier versions or Windows versions – is also compiled for PowerPC Macs. As a result, Quicken 2005 (which I was running), Quicken 2007, and the Quicken File Exchange utility won’t run on a Mac running Lion.

Intuit has not been especially helpful to its Mac user base; the company’s advice to users with this problem is to open an account with Intuit’s Mint.com online financial service. The problem: It doesn’t import existing financial data. Otherwise, Intuit suggests users install Windows on their Mac (perhaps using one of several virtualization programs) and run the Windows version of Quicken.

In the July article, I walked users through the process I went through of exporting and importing my Quicken data – something that I did prior to upgrading to Lion.

Although I was able to successfully import my financial data into Quicken Essentials, I quickly became disenchanted with the program.

My needs in financial software are fairly basic. I need something that lets me enter expenses and income, keeping a balance, and assigning each item into a category. Quicken Essential does this fine. 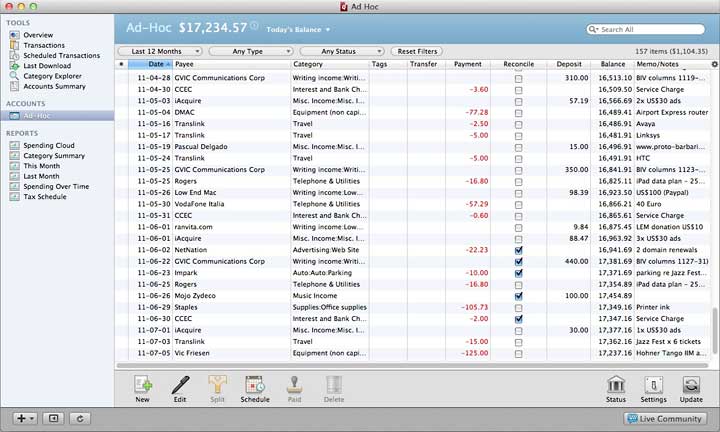 But I also need to be able to create a report for each year, showing my expenses and income by category, and totaling each category. This is helpful when filing my income tax return.

And unlike the 2005 version of Quicken I was previously using, Quicken Essentials 2010 doesn’t let me do that. It has a menu item labeled Export Tax Report – but that creates a report that can be used only by Intuit’s companion TurboTax software, and only in the US. (I’m in Canada.)

I could, I discovered, display just the current year’s transactions, then export to CSV (Comma Separated Values) format, a standard text file format that can be imported into a spreadsheet like Microsoft Excel. In Excel, I could sort the data by category, then manually total up each category, and eventually end up with something approximating the reports that I could quickly create in the earlier version. But that’s a lot of effort.*

(It’s not like this is a particularly advanced requirement. Prior to using Quicken 2005, I was a running the 3.0 version of Microsoft Money, a piece of Windows software so old that it shipped on a single floppy diskette.)

Luckily, Quicken Essentials 2010 ($50) is not the only option for Lion users.

Another alternative is iBank. This $60 program (also available through the Mac App Store, free trial version available from company website) is far more capable than Quicken Essentials; like older versions of Quicken (and current Windows Quicken versions), it does far more than I need, promising the ability to manage a variety of account types, track loan interest and payment schedules, manage multiple accounts, download transactions directly from many financial institutions, track investments, and much, much more. 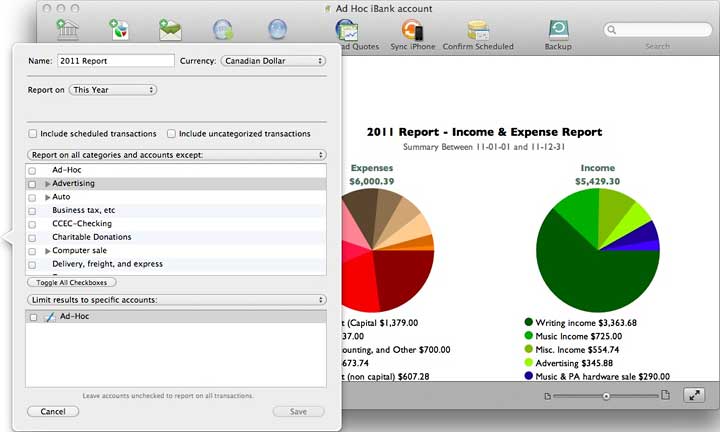 While I don’t need most of those features, it also allows report creation – from simple reports (like I need) on up. 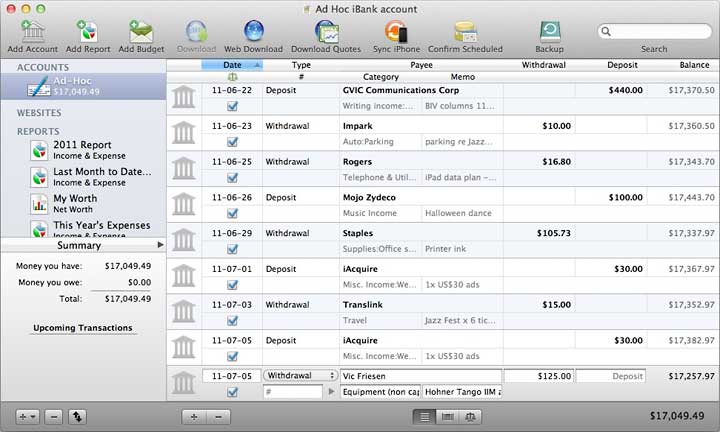 iBank imports Quicken export files and runs in Lion, but be sure to export before you install Lion.

There’s even an iBank Mobile iOS app ($5) that syncs with the Mac version over WiFi.

One oddity: With the same old Quicken data imported into both Quicken Essentials and iBank, the two applications show different totals – a difference of about $20. That puzzles me, but I’m prepared to live with it.

In any event, even with what I think are fairly minimalist needs, I’m finding iBank much more usable as a Quicken replacement than Intuit’s anemic Quicken “Essentials”.

But even though iBank can import older Quicken data while running in Lion, Mac users of an older Quicken version still need to remember to export the data from Quicken prior to installing Lion. After upgrading to Lion is too late!

A reader suggests that choosing the Category Summary icon under Reports in Quicken Essentials for Mac will produced the reports I need.