I have been running Mac OS X 10.5 Leopard on my 500 MHz Titanium PowerBook G4 for a few months, and it ran very well, but the last week it has developed serious problems, and I am beginning to wonder if they are related to running Leopard.

At the bottom of my last article, Is Tiger or Leopard Better for Sub-867 MHz G4 Macs?, I touched on the subject of heat. 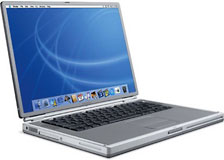 First generation PowerBook G4s suffered from excessive heat, especially the 400 MHz models, and even under supported operating systems. The 500 MHz version seemed less so, but under Leopard it ran very hot.

A few days ago, mine would not wake from sleep, so I force shut it down. On reboot, it beeped three times, indicating bad RAM, but replacing it made no difference. I zapped the PRAM (hold Cmd-Opt-P-R at startup), and got it going again, but it kept hanging.

I rebooted into OS X 10.4 Tiger, and it did the same. Over the next couple of days I got it to run for a few hours before it would hang again. Now it is hit or miss whether it boots or beeps.

Running it with the bottom casing off, I can feel the chips underneath getting very warm but stable. Putting the base back on, it becomes very hot and hangs.

Is this caused through too much pressure on the hardware? Is it running too hot? Or is the sheer fact of using a 10-year-old Mac for my main everyday Mac just too much?

I wouldn’t normally post such an open-ended article, but after so much info about putting unsupported operating systems on older hardware, I thought I ought to share this too.