Today, I am maximizing the Power Mac G5, with the 2 GHz dual-core Late 2005 version being my test subject. We are going to benchmark the stock Mac just as I received it and then upgrade it with more memory, a new hard drive, and an SSD. 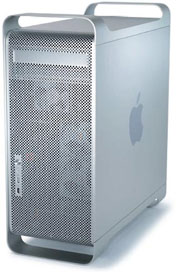 I would like to start this out with some straight out of the box benchmarking. The G5 came loaded with Mac OS X 10.5.8 Leopard. I ran Xbench, as it has always been my go to benchmarking software for older Macs. I also recorded the boot time and the time to launch Photoshop CS2. Testing video playback was last and totally uneventful with the 2.0 GHz dual core G5 running even 1080p HD with no issues. 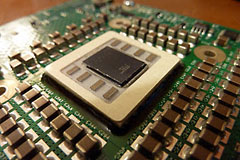 The Xbench numbers tell a lot of the story with a paltry 85.14, which is compared to the older 2 GHz dual-processor Power Mac G5 2.0 (which has GeForce 6800 Ultra video) being worth 100 points. It turns out the hard drive was to blame with scores 5% to 115% lower. Boot time was what I call reasonable at less than a minute. Photoshop always seems to take an eternity to load. Again, video playback was very smooth.

Next up, I installed a 500 GB Western Digital 6 Mbps SATA drive. Before I could install it, I needed to adjust the jumper on the hard drive to run at the 1.5 Mbps SATA speed. I installed Mac OS X 10.4.11 Tiger along with the same applications that were tested on the old drive. 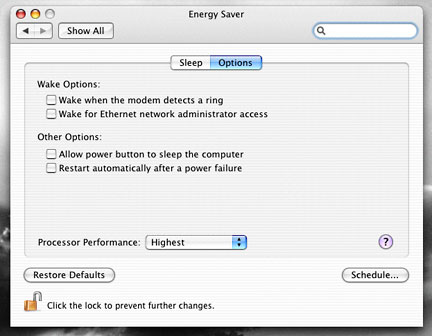 Another thing to do when you get a G5 is set it to performance mode in the Energy Saver pane in System Preferences. (I initially forgot this and had to rerun tests – and it makes a difference!) I also installed 8 GB more memory at this time (for a total of 10 GB).

Xbench jumped up a great deal with 24.79 more points (29%!). This was because of the hard drive change, as the memory scores stayed the same. It looks like replacing your original boot drive is a good investment. Boot time was seven seconds faster, and launching Photoshop was faster by four seconds.

Next up was to test Photoshop with my filter test. This includes running two intensive filters and recording the time it takes to complete them. The memory and hard drive boosted our scores here with the memory allotted at maximum 3072 MB (nowhere near our 10 GB, but better than PS 7). Running my filter package on a 222.5 MB photo only used around 2.70 GB of memory total.

Time to get busy with OWC Mercury Extreme Pro 240 GB SSD. Man, this thing is a sexy piece of kit! It literally looks like it’s a blue block of aluminum. I installed it with the Newer Technology 2.5″-3.5″ convertor. This was also a quality piece, which keeps with the design of the G5 nicely. Installing it was a breeze, as it has no jumpers and slides right into the G5’s second drive location. It also installed OS X as if it were a mechanical drive.

Right away I noticed how quiet the computer was. The mechanical hard drive was all I could ever hear with the G5 at my desk side. Anyone looking for a silent computer will be very happy with SSD drives like the one tested here. Let’s take a look at how it ran.

Things are really speeding up now with Xbench busting out 21.85 more points! This is faster than a stock 2.7 GHz dual processor G5, which scores 109.87. Boot time dropped another 3 seconds, and all of the apps dropped seconds off their time with Photoshop shedding 10 seconds off its launch time. My filter test came in 26 seconds faster. I was interested in how fast it was at loading apps, and man is it fast. Most of my applications loaded instantly, and only a few loaded slowly enough to measure them.

Today I raised the bar for all G5 owners by punching out a 131.78 in Xbench. That’s 45% faster than a stock dual-core G5. This breathes new life into an aging computer that was phased out long ago.

All of that comes at a cost though. I got my swanky G5s for free, and you can pick up a dual core 2.0 model like mine on eBay for around $150 (plus a hefty shipping fee, as the things are heavy). Let’s break down the cost of ownership and upgrades:

Personally, I would love to have the whole thing and keep this beast going for another five years – but the total cost of ownership is just too high. For $692 I can pick up a used Mac Pro. The SSD is dead silent and blazing fast, but I am afraid that for one, its bottle-necked by the 150 Mbps speed of the G5’s SATA bus, and SSDs are still too pricey for the low-end market. That said, I will be upgrading my G5 with the another Western Digital hard drive and 4 GB more memory (for a total of 6 GB) for $58 after I send the other upgrades back to OWC. It gives the best balance of performance and price for a low-end Mac user such as myself.

Thanks to OWC for loaning the memory kits and SSD for testing.

*The Western Digital Hard drive was purchased before the floods in Thailand that have caused hard drive prices to increase dramatically.