From the Aluminium PowerBook G4s upwards, USB 2.0 was built in, but the Titanium PowerBook G4s came with USB 1.1. While this is great for small files and occasional use, it is really slow for copying large amount of data.

USB has to be one of the greatest additions to the computing world. It has helped bridge the gap between interfaces and provides a excellent way of sharing drives across platforms. USB 1.1 was great but limited by its 12 Mbps bandwidth. USB 2.0 was a massive step up with a bandwidth of 480 Mbps.1

FireWire, which has a lower bandwidth of 400 Mbps, is able to achieve over 80% of its speed (see Tom’s Hardware) due to FireWire’s more intelligent (and more expensive) controller, which places less demands on the computer’s CPU than USB and generally results in much better real world performance (see Bare Feats).

This should work with Tiger and Leopard on PowerBook G3 and G4. It won’t work with G3 iBooks, as they have no CardBus slot – and G4 iBooks have built in USB 2.0.

I had a 6 GB file I needed to copy from a USB hard drive. With USB 1.1 it took over 2 hours; with USB 2.0 it took about 20 minutes on the same machine. That’s a massive difference. 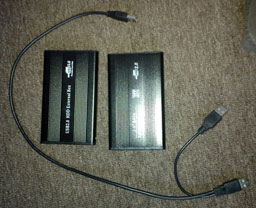 I have two laptop hard drives in external cases. I downsized all my external hard drives and moved to bus-powered laptop drives. I have a 60 GB IDE hard drive and a 120 GB SATA hard drive, both in cheap USB 2.0 cases. Both of these came with a Y-cable.

A Y-cable is a handy splitter. It is a standard USB cable, but one end is split and has two USB connectors. Why? So you can use one side of the Y to handle data and power from one USB port and the second provides additional power from a second USB port.

Here is the scenario, and it seems to vary between different machines. I had about 55 GB on my 60 GB IDE/USB drive and wanted to transfer everything to the 120 GB SATA/USB drive. Both drives are FAT32 formatted, so I can use them cross platform.

I connected the 60 GB drive to my 500 MHz Titanium PowerBook G4 via its internal USB 1.1 port, but it didn’t mount. You could hear it clicking and trying to spin, which meant there wasn’t enough power, so I plugged the other end of the Y-cable into the other USB 1.1 port, and it spun up. Of course that means the drive was connected via USB 1.1.

I tried the same thing with the 120 GB SATA/USB drive – same problem. Restoring my iPod with my music over USB 1.1 was going to take hours.

Not Enough Power from a PC Card’s Ports

However, when I popped in my USB 2.0 PCMCIA card and plugged in the 60 GB IDE/USB drive, it didn’t power it – not even when using the Y-cable with both ports on the card. I tried the 120 GB SATA/USB drive, which did the same. 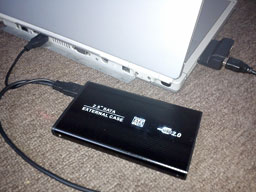 This is a power issue. This is common when you use a PC Card, as it does not draw enough power from the machine to power heavy drives. Small flash drives are fine, and devices with their own power supply are fine too. However, there is no way to supply additional power to these drive cases with an AC adapter. My PCMCIA card has a DC socket between the two USB ports, but I do not have a power adapter for it. I am presuming if I did it would resolve this by offering additional power to the ports.

How else can it be done? My mobile phone came with a power adapter you plug in the wall, which has a USB outlet on it. You can also get them for iPods and iPhones.

So with the 120 GB drive not containing any critical files, I used it to test this out. I plugged in the USB power outlet, plugged one end of the Y-cable in to the USB port on this plug, and then plugged the other side of the Y-cable in one of the USB 2.0 ports on the PC Card and the other end into the drive. This worked, kind of. It gave additional power, but it wasn’t very reliable. As soon as too much strain was put on the drive, it would just drop connection.

I needed another solution. 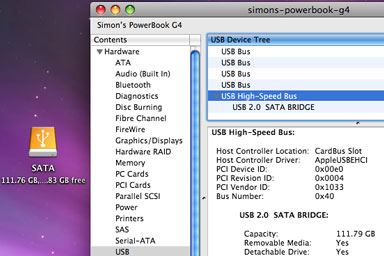 Taking my USB 1.1 solution and tweaking it slightly, I decided to take the side of the Y-cable out of the USB 2.0 outlet in the CardBus card and plug it into one of the USB 1.1 ports on the back of the PowerBook G4 so I had the Y-cable split with one side in a USB 2.0 port and the other in a USB 1.1 port. This worked, but according to System Profiler, data was only on the USB 1.1 port, so I switched the Y-cable around, and it worked.

I now had the 120 GB SATA/USB drive connected to my Titanium PowerBook G4 and transferring at USB 2.0 speeds without the need for additional external power source.

I hooked up the 60 GB IDE/USB drive in the same fashion. It worked; I could now access my music collection via USB 2.0.

Only Enough Power for One Drive

But when I connected both drives to my Titanium PowerBook G4 at the same time using this method, it didn’t work. It would not power them; you could hear them clicking and trying to spin.

I can now access my data via USB 2.0 without an additional power source. I thought I would document this and share it, as it took a whole day of playing and changing cables round to get it working.

It is a great work around for Titanium PowerBook G4 owners. It should also work for PowerBook G3 owners.