When I first heard the news that Steve Jobs had died, it hurt. It hurt really bad, causing the kind of heartache that is usually reserved for the passing of close family members.

Of course, I didn’t know Steve Jobs on a personal level. The closest I ever got to him was being in the same room as him at Macworld and WWDC keynotes.

I imagine I’m just one of millions of strangers feeling that sense of loss right now.

To the legions of Apple fans, Steve felt like a close friend – or a relative that we don’t see very often, but one that we are proud to have in the family tree. Around my house, he was known as “Uncle Steve”.

You’ve got to wonder why a significant percentage of the world felt like they knew the CEO of a major American corporation, or at least felt some sort of connection to him. Granted, Apple, Inc. (by some methods of measuring these types of things) is the most valuable American company right now. So, yeah, we’re dealing with a huge public figure here. But how well do you know the CEOs of some of the other lucrative American corporations? Can you even name the CEO of Exxon? How about the men or women in charge of IBM, Wal-Mart, AT&T, or Procter & Gamble?

I think we felt connected to Steve by using the products that Apple produced under his leadership. Especially when it comes to the iconic projects that he shepherded – products so iconic that even non-Apple users recognize them, like the Apple IIe, the original Macintosh, the first iMac, the iPod, and the iPhone. We could always see a bit of Steve’s philosophy shining through. The best of these products are minimal, yet sturdy and durable in their design and construction.

Steve’s public persona was much the same. When he spoke, whether at his famous keynotes or in the curt email replies collected at emailsfromstevejobs.com, he spoke in a minimalist fashion, using as few words as possible. But they were strong and sturdy words that were chosen carefully for maximum impact.

Those of us who follow Apple closely know that Steve didn’t do everything at Apple – far from it, even when the company started in his parents’ garage. But his influence was clearly felt in the best Apple products. We could hear his words in our heads and see what he meant when he talked about that product.

I was 11 years old when I first sat down in front of a Macintosh in 1985 and, as an Apple II user for four years at that point, it seemed a little foreign. But once I put my hand on that mouse and figured out what it did, I knew it was “insanely great,” as the man himself had said.

If we really want to know who Steve Jobs was, I think we need to look at a few of his many famous quotes and glean some insight on the man behind the public persona. Many of these quotes have been bouncing around in my head for years, and I’ve often tried to quote them as appropriate to the discussion at hand, but the folly of human memory meant that I was usually paraphrasing them as best I could. Thanks to the great quote database (and Wikipedia sister project) Wikiquote for gathering them, quoted accurately and with the sources for proper attribution.

We’re gambling on our vision, and we would rather do that than make “me too” products. Let some other companies do that. For us, it’s always the next dream. – Interview during the release of the first Macintosh, January 20, 1984. Clearly, Steve always pursued his dreams rather than trying to copy the rest of the industry. Not that Apple didn’t use some things that others came up with first (e.g., Xerox’s GUI, Intel’s USB, the iPod was far from the first portable MP3 player, etc.). But Steve followed his dreams in creating new products, and once his dreams started to match what the rest of the world wanted, Apple became a runaway success.

Real artists ship. – Something Steve said near the end of the first Macintosh’s development cycle. While Steve did use dreams for inspiration, he was also a hell of a businessman and knew the importance of actually putting the product on shelves for folks to actually buy. Apple has shipped many “version 1.0” products over the years, just to get them out there; they all then went on a continuous cycle of improvement to make them great.

Do you want to spend the rest of your life selling sugared water or do you want a chance to change the world? – Steve, in 1983, convincing Pepsi executive John Sculley to take the CEO position at Apple. Steve knew he was offering the position of a lifetime to Sculley, and when it came down to brass tacks, he used this colorful quote to help Sculley see the potential. Of course, the whole Sculley thing was something Steve came to regret….

I feel like somebody just punched me in the stomach and knocked all my wind out. I’m only 30 years old and I want to have a chance to continue creating things. I know I’ve got at least one more great computer in me. And Apple is not going to give me a chance to do that. – From Steve’s 1985 resignation letter to Apple’s board of directors. He lost an attempted boardroom coup after he realized making Sculley CEO was a mistake. He had nowhere to go but out the door when the board sided with Sculley, and Steve’s resignation letter is legendary for its honesty. We’ll never know exactly how he felt being booted from the company he founded, but those words give a pretty good clue. Of course, he would get his groove back shortly thereafter when he founded NeXT and was able to pursue the next-generation computing that Apple rejected in favor of Sculley’s more traditional vision.

It is hard to think that a $2 billion company with 4,300-plus people couldn’t compete with six people in blue jeans. – Steve said this to Newsweek in September 1985 after learning that Apple was suing him over his plans for NeXT. Although Apple’s board didn’t want to take the company down the path Steve envisioned at the time, they didn’t want him following that muse either. 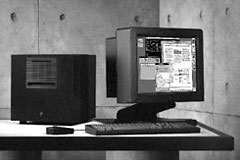 It’ll make your jaw drop. – Steve described the first NeXT Computer thusly to The New York Times in November 1989. The combination of beautiful, powerful hardware, and revolutionary software (think OS X back in 1989) did indeed stun many of the folks who got to use NeXT computers. But with the machines priced anywhere from $6,000 to $10,000, too few folks could afford to even come close to touching one.

You know, I’ve got a plan that could rescue Apple. I can’t say any more than that it’s the perfect product and the perfect strategy for Apple. But nobody there will listen to me. – Despite achieving his artistic and technological goals with NeXT (if not his financial goals), it seems pretty obvious that Steve always wanted to return to Apple, based on this September 1995 quote in Fortune magazine.

If I were running Apple, I would milk the Macintosh for all it’s worth – and get busy on the next great thing. – Steve, talking to Fortune again, this time in February 1996. When he finally did return to Apple at then end of 1996, that’s basically what he did. The iMac updated the classic Mac for the late 20th century, and once Apple got back on firm financial footing, Steve slowly evolved Apple Computer into Apple, Inc., a decidedly different company that still makes computers but reaped insane financial profits from consumer devices like the iPod, the iPhone, and the iPad.

It will go down in history as a turning point for the music industry. This is landmark stuff. I can’t overestimate it! – This quote from Steve to Fortune, this time from May 2003, was referencing the iPod and the just-opened iTunes Store, and it sure did seem like a very, very large overestimation to many at the time. The iPod was selling well but was still viewed by many as an overpriced MP3 player, and nobody believed the iTunes Store would amount to much. Fast-forward to today, and Apple is selling 40 to 50 million iPods a year, and iTunes is the world’s largest music retailer – a perfect example of following the dream and having the rest of the world catch up later. Look at the design of a lot of consumer products – they’re really complicated surfaces. We tried to make something much more holistic and simple. When you first start off trying to solve a problem, the first solutions you come up with are very complex, and most people stop there. But if you keep going, and live with the problem and peel more layers of the onion off, you can often times arrive at some very elegant and simple solutions. Most people just don’t put in the time or energy to get there. We believe that customers are smart, and want objects which are well thought through. – This quote to Newsweek in October 2006 was about the design of the iPod, but it applies to nearly every product Apple shipped under Steve’s watch.

And one more thing… – Steve used this line too many times to count, but it perhaps best epitomizes his sense of showmanship. It doesn’t provide any great insight into his thought process, but it is the most memorable quote to come out of many of his famous keynotes and displays a level of connection with his audience (who would be hanging on his every word) that most CEOs will never come close to achieving.

The man who gave us these provocative, insightful, cutting, and funny quotes will never speak again. But his legacy will live on, both within Apple and within the hearts and minds of those of us who followed him and his creations.

Although many of us will never know him, he will always be Uncle Steve to me.