On Monday, Apple updated the MacBook Pro (MBP) line with faster processors (CPUs) across the board, along with higher capacity hard drives and better graphics processors (GPUs) on some models with no change in pricing.

Granted, these are not huge speed bumps, ranging from a high of 10% to a bit under 4%, but in every case you are getting more computing power at the same retail price as the Early 2011 models offered. (Of course, those models are now being discounted, where inventory remains, which may make them a better value – the whole point of this article).

Other than processor speed, hard drive capacity, and graphics processors, the hardware appears to be identical to the Early 2011 models, which means they can run Mac OS X 10.6 Snow Leopard if you need to or want to.

Not all dealers list all the new models at present, and most do not yet have inventory, but that should change in coming days.

It’s a shame Apple hasn’t seen fit to offer the same 13.3″ 1440 x 900 display found in the Mid 2011 MacBook Air either as a standard feature or a build-to-order option, instead sticking with the tried-and-true 1280 x 800 display used in every 13.3″ MacBook model since the first one shipped in May 2006. Of course, 1440 x 900 is the same resolution as the 15″ MBP, and I’m sure Apple doesn’t want to cut into sales of the more expensive (and more profitable and more powerful quad-core) model. Maybe we’ll get a higher resolution display in the next revision of the 13″ MBP.

The entry-level MacBook Pro has a 4.3% faster CPU, which should make a barely perceptible difference, along with fifty-some percent more hard drive space. The better model gets an even less impressive 3.7% speed bump, along with a 50% bigger hard drive. In terms of value, I’d peg the faster speed as worth about $50, and the same for the larger hard drive. 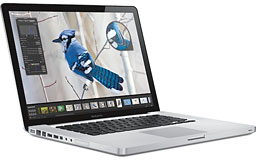 We see the biggest speed bump on the 15″ MBP with this round of upgrades – 10% more speed at the entry level and 9% more on the faster version.

On a $2,000 computer, let’s say the 10% more speed is worth $200, and the larger hard drives perhaps $50. It’s more difficult to place a value on a better graphics card and double the video memory, but let’s say $50 there as well. On the entry-level model, you save $160 with the close-out model. If your budget is tight, I certainly wouldn’t recommend against it, but the new 2.2 GHz model offers more value.

Going to the faster edition, the price difference drops to $150. With a slightly faster processor, a slightly better graphics processor, and 250 GB more drive space, the new 2.4 GHz model represents a much better value, especially since the new 2.2 GHz 15-incher offers almost everything the Early 2011 2.2 GHz one has at $240 less, making it the value champion.

Apple’s best values are almost always in refurbished units, hardware sent back from customers or retail stores, tested and certified before being reboxed and resold with the same warranty as a new-in-box machine. Several members of our writing staff have been very happy with Apple Certified Refurbished equipment, and we’ve been using them at Low End Mac headquarters since 2003.

Want a steal on a 15″ MacBook Pro, which many consider to be the ideal sized notebook? Look no further than the 2.0 GHz quad-core i7 Early 2011 model selling for $1,359 refurbished. That saves you $395 compared to the best price on the new 2.2 GHz model, again leaving plenty of money to double memory (even at Apple’s prices) and upgrade to a higher capacity hard drive.

Need more power? The 2.2 GHz Early 2011 version sells for $1,699 refurbished, which only saves you $50 over the Late 2011 model at the same speed, but you’re getting twice as much video memory. Granted, it’s not a huge price difference, but if you can benefit from having 1 GB of video memory vs. 512 MB, this is a good (but not great) value.

Overall, refurbs offer excellent value for the budget-conscious. Those drawn to the ultimate speed will always want the latest and greatest (and most expensive), but for those with more low-end needs, refurbs merit you attention – but be aware that inventory may be limited.