Apple surprised everyone by not introducing a 15″ MacBook Air, as the rumor mill widely expected, and instead added a premium version of the 15″ MacBook Pro – one with a super-high resolution 2880 x 1800 pixel 220 ppi Retina Display. 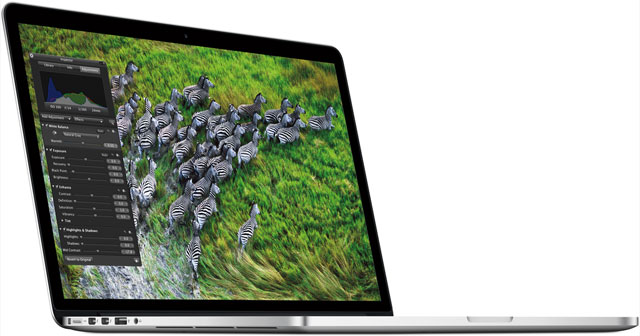 The MacBook Pro with Retina Display (quite a mouthful) is the thinnest MacBook Pro ever at 0.71″. That’s MacBook Air thin, but unlike the Air, this model doesn’t have a wedge design. It is almost 1/4″ thinner than the 13″ and 15″ MacBook Pro models.

Like the MacBook Air, the Retina MacBook Pro does not have a built-in optical drive and uses SSD instead of a traditional hard drive.

As with the new MacBook Air and MacBook Pro models, it has built-in USB 3. The improved USB specification is over 10x as fast as USB 2.0 and has half the bandwidth of Thunderbolt. There are already a lot of USB 3 drives on the market, and they are far more affordable than Thunderbolt drives. Best of all, Apple uses the same port for USB 2.0 and 3, while the standard in the PC world is separate ports for each protocol.

The Retina MacBook Pro adopts Intel’s newest, more efficient Ivy Bridge processor technology, which incorporates Intel HD Graphics 4000 (up to 60% faster, according to Apple) in the CPU. The base model runs a 2.3 GHz quad-core Core i7 processor (with Turbo Boost to 3.3 GHz) and has 8 GB of system memory and a 256 GB SSD with a $2,199 price tag, while the “better” version increases speed to 2.6 GHz (3.6 GHz with Turbo Boost) and includes a 512 GB SSD.

Apple offers a number of build-to-order options: Upgrade system memory from 8 GB to 16 GB for $200 (because memory is soldered to the system board, you cannot upgrade memory after you buy your Retina MacBook Pro), choose a 768 GB SSD on the 2.6 GHz model, and boost the faster model a bit further with a 2.7 GHz quad-core i7 for $250 more.

This is one of the first Macs to use Intel HD 4000 Graphics, and on the 15″ MacBook Pro it’s coupled with Nvidia GeForce GT 650M graphics. As before, it automatically switches between GPUs on the fly, although with such a high resolution display, it will probably use the GeForce graphics most of the time. The Intel GPU uses 384 MB of system memory, while the Radeon GPU has 1 GB of dedicated video memory.

The big question is whether the Retina Display will bog things down, as it does on the New iPad compared to the iPad 2. And, like the New iPad, the Retina MacBook Pro has a higher capacity battery than the regular MacBook Pro.

Ports on the Retina MacBook Pro.

The Retina MacBook Pro splits the ports between the right and left sides, something earlier MacBook Pro models could not do because of the built-in optical drive.

The new model uses a MagSafe 2 power adapter (which has a smaller plug than the original MagSafe), is rated at 7 hours of battery power, and uses Bluetooth 4.0 along with 802.11n WiFi for wireless connectivity.

The MacBook Pro has an 18-bit glossy display (not the 24 bits you might expect). Like the iPad and iPhone, it does not have an easily replaceable battery. Cost to have Apple replace the 95 Watt-hour battery out of warranty is $199.