Today is the 13th anniversary of the Blue & White Power Mac G3 – one of the most attractive Mac towers ever. This was in the era when Apple decided to move away from the boring grey boxes that Windows machines and the previous Power Macs had used.

I had one of these machines – mine was a 300 MHz model with a CD-ROM and built-in Iomega Zip drive. It came with 128 MB RAM, but in my box of spares I had three 256 MB sticks and promptly fitted them, as well as swapping the CD for a DVD-RW drive, installing a 40 GB hard drive, and running Mac OS X 10.4 Tiger on it. I must point out while the Blue & White was released in 1999, I received mine in 2008 when they were at a low price point and upgrading them was done very cheaply.

In 2008, we were already in the Intel Age, but G3s were still fairly commonplace and still a good basic Mac to use. Mine was used for surfing the Web and letting my kids get used to the Mac world. 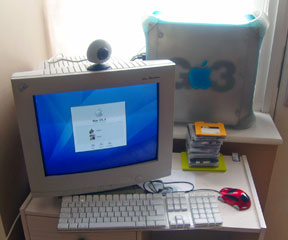 It was the first Mac tower with built-in USB and FireWire – although it cannot boot to FireWire target mode. It was a bridging model, as it still had the old ADB connector – and would be the last tower to do so.

Not only was it a break from the boring dullness of previous computers, it also had two carry handles – something that would be carried through to later Power Mac and Mac Pro models. Apple seemed fond of their handles, as they were also found on the iMac G3 and Clamshell iBook G3.

The Blue & White G3 was also a breakthrough model, as it used a lot of generic hardware. You could fit standard IDE hard drives, IDE optical drives, and RAM in them rather than custom RAM modules or special Mac compatible sticks. Also, the processor was sitting on a ZIF socket, which meant you could swap it out. I replaced the 300 MHz chip in mine with a 350 MHz, and it worked. Not a massive speed bump, but for the few pennies I paid for the chip it all helped.

While Apple kept the design of the Blue & White tower in future G4 Power Macs, it toned down the colours to silvers and greys.

With a DVD drive fitted, and with it having a built-in FireWire port, it can run Mac OS X Tiger, and with enough RAM it does so very well. Originally shipping with Mac OS 8.5, for it to run Tiger (six OS revisions later) shows just how great this machine was.

There was an issue with “Revision 1” machines that caused problems using master and slave drives. If I remember correctly, the optical drive had to be a master drive on either IDE channel, otherwise it could interfere with other drives in the machine. This was sorted out in “Revision 2” models, so if you are looking for one of these, I would suggest searching for a Revision 2, which can be spotted as the IDE controller chip has “402” written on it.

Interestingly, the Revision 2 Blue & Whites share the same motherboard as its successor the G4 “Yikes” which also had a PCI graphics card. This was then changed with G4 “Sawtooth” which had an AGP graphics board and Airport card support.

This was a truly great Mac, in terms of design, upgradeability and usability. Its fast drives and high end graphics (for its time) made it a powerful machine and a huge improvement over the Beige G3 ‘Gossamer’ tower that it replaced.

A brilliant machine and a brilliant example of Apple design.