Six years after Apple switched to Intel, I am finally back owning one, but sadly leaving the PowerPC Mac world behind.

In 2006, I became one the first to jump to Intel with a 1.83 GHz iMac. It replaced my 1 GHz G4 eMac, and the difference was amazing. The sheer processing speed of the new Intel chips was phenomenal.

However, after just over 14 months it died slowly, losing its SuperDrive, then its hard drive, and then failing to boot at all. A failed power board seemed the problem, killing other internal components as it went.

I had a 400 MHz Titanium PowerBook G4 as well, and this became my main machine. Since then, I never managed to get my foot back on the Intel ladder. I had lost my job in late 2006, and my financial situation was very tight.

Over the following years, I flitted from various low-end G3 and G4 machines.

It was in the past 18 months that I think we all started to feel the pressure. Mozilla killed off PowerPC (PPC) support with Firefox 4, Google never released Chrome for PPC, Adobe killed off PPC Flash, and Apple – well, they left us long ago (except for some iTunes updates in PowerPC Leopard, which was primarily for Apple’s own benefit).

Mac OS X 10.6 Snow Leopard was released in August 2009 for Intel Macs only, and now OS X 10.7 Lion (July 2011) has dropped support for PPC software. And with OS X 10.8 Mountain Lion around the corner, PowerPC Macs are getting further and further behind.

With web standards increasing and the PowerPC physical hardware becoming more dated, a 1 GHz G4 machine doesn’t cut it in the real world anymore – even simple tasks like browsing the Web are only being kept alive by the TenFourFox team; without them we would be left with no maintained browser. YouTube is extremely sketchy on older hardware, and with a lot of the web Flash-heavy, it makes your 8-year-old Mac struggle.

I finally caved. I have packed up and sold my PowerBook G4, sold all computer spares, my iPod, and old Mac discs, and with a bit of scraping I managed to pick up a very nice Intel bargain. 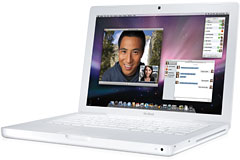 I am writing this on a 2 GHz Core 2 Duo Early 2009 MacBook with 2 GB of RAM running Snow Leopard. I have decided to not upgrade to Lion until I have recovered from the expense and can upgrade the RAM to 4 GB.

This is one of the last white body MacBooks, and it has the powerful Nvidia 9400M graphics chip, which is currently supported by Mountain Lion beta – as opposed to the previous line of GMA 950 and X3100 graphics chips, which aren’t. This should future-proof me for a few years yet – as long as Apple doesn’t decide to drop support in the final version of Mountain Lion.

I will be sad to leave an era that has served me well, but after spending a few hours setting up and playing with this MacBook, it really shows the power vs. my old PowerBook.

I have pushed this MacBook hard today: downloading from Dropbox, installing system updates, moving files from my backup drive, and downloading and installing my applications, and it hasn’t broken a sweat. It has not chugged. It has not “beach-balled” once.

All is not lost. I am sure the love of low-end will call me back at some point. I might pick up a Clamshell iBook G3, to max out and play with, but this time it will be a side project rather than my main Mac.

This will not mean the end of my column; I shall continue to write for Low End Mac.