As much as I love getting the most out of older Apple machines and devices and being a low-end user, sometimes I just want to be up there running the latest software and operating systems. 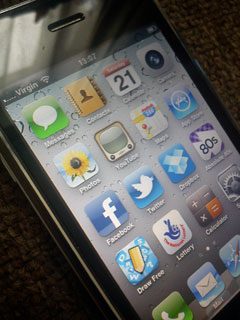 I recently switched from a G4 PowerBook to an Early 2009 MacBook. My next move was my mobile phone. I have been using a 2G iPhone running whited00r, and while it is quite fast – and as a phone it is brilliant – running iOS 3 meant slowly getting left further and further behind. I did have an iPhone 3G, but it was too slow and terrible for signal, so I went back to my 2G.

Last week I picked up an iPhone 3GS. It is gorgeous 16 GB white “factory unlocked” model. I bought it from a refurb company. It was marked as grade C, meaning it had a lot of scratches and scrapes – but it doesn’t. It is in mint condition.

Within minutes of playing with it, I noticed the serious speed improvement. It came loaded with iOS 4.3.5. The whole handset is faster, menus don’t lag, apps open so much quicker, and the addition of multitasking makes flicking from one app to another so much easier.

Here is a YouTube video of my 3GS running iOS 4 beside my original iPhone running whited00r.

I hesitated about updating it to iOS 5. I had heard a lot of horror stories about it bricking some iPhones, severely reducing battery life, and making the phone so slow it is unusable.

However, I bought it so I could take advantage of the new iOS 5 features – and so I could upgrade to Lion on my MacBook and have the whole integrated option – so I took the plunge.

Here is a YouTube video of my 3GS running iOS5 besides my original iPhone running whited00r.

The update went smoothly without a hitch. The battery life is still superb, and if anything I think the phone is faster running iOS 5 and than iOS 4.

My 2G phone was great for battery life, easily lasting two days – but then I didn’t do too much on it when out and about because of the slow pre-3G data speeds. The iPhone 3G’s battery was worse, but then it really struggled to cope with iOS 4 and even running whited00r (iOS 3 base) on it, the problems with its signal fluctuation caused a lot of battery drain.

The 3GS is brilliant for battery. It was fully charged at 9 a.m. yesterday, and I used it pretty heavily, tweeting, Facebook, surfing, emailing, texting, using iMessage, listening to music, and I even had some calls on it. At 9 a.m. this morning it still had over 50% battery left, and it was left on all night. That is impressive for a modern smartphone.

The 3G had poor signal and call quality; the 3GS however doesn’t suffer from this. Crystal clear and very loud calling and a good signal is a welcome change. My 3G was almost unusable in my home (most of the reason I switched back to my 2G).

For anyone thinking of getting an iPhone and would like iOS 5, I would seriously recommend the 3GS. I was coerced into getting one, and I bought it on the recommendation of three other people who swore to me it was nothing like the 3G and that I would be seriously impressed.

I was a little dubious that it could be such a serious improvement, but I was caught in an odd place. My 2G was too slow for data, and the 3G was horrible, so I either had to plump for a 3GS (as a 4 or 4S is out of reach for me) or pick up an Android. As much as I liked my Android phones previously, I had been converted to iPhone and didn’t want to go back.

All I can say is I am so glad I listened to them. The 3GS is a dream. Highly recommended. The 50% faster processor, doubled RAM, better camera with autofocus and video recording, and the ability to run iOS 5 really puts the 3G to shame.

If you are thinking about it, get one. Go for it.