I saw an advertisement on television a few days ago for the new Google ChromeBook. Originally launched in 2010, I had shown a small amount of interest in them, but the new price was the clincher that made me sit up and pay attention. 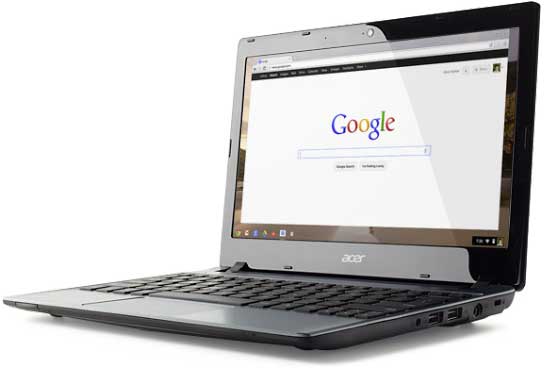 A laptop for £199 ($199 in the US) that is a ridiculously cheap. What exactly do you get for your money and how is this article relevant to Low End Mac?

Firstly, there are two new models of ChromeBook.

Those specs are pretty impressive for their price. The Samsung also has a sleek look, similar to that of the MacBook Air.

When it comes to thinking about replacing that aging G4 PowerBook – or even early Intel MacBook – I am sure all of us would love to go out and purchase a shiny new MacBook Pro, but the sheer fact we use older Macs in the first place is largely down to financial restrictions. I don’t have £1,000 for a new MacBook Pro, but I could possibly stretch to £200 for a ChromeBook – or less for a used one.

Working in the Cloud

For anyone who doesn’t know what a ChromeBook is or the difference between one and a regular Windows or Apple machine, the ChromeBook runs the Google Chrome OS, a lightweight custom Linux distro mainly based around the Chrome browser. Everything is done online; the ChromeBook itself is merely a gateway to your Google account and documents.

Similar to the App Store on your Mac or iPhone or the Android Market on your Android device, Chrome OS has a place to download additional apps and games. Of course, being a Google device, everything ties to a Google account, which might make switching to it more difficult. However, if you already use an Android phone or tablet, the switch would be very easy, as you probably already have an account you are using. [Publisher’s note: If you have a Gmail or Google+ account, you’re well on your way. dk]

The Acer has a built-in hard drive so you can store local files, but the general premise behind Chrome OS is that everything is stored online. You could work on your ChromeBook, close it, drop it in a river, sign in to another one with your login, and within minutes have access to all your online apps and files.

It is such a lightweight operating system that it can boot within 10 seconds from cold and be ready and online, and it wakes from sleep instantly, making it a great portable option.

Also, being Linux-based and a new OS, there are no security issues to worry about in terms on viruses – so no additional protection software to install or maintain.

Can It Replace Your Mac ‘Book?

I would rather use a PowerBook G4 than a Windows machine – and even possibly a ChromeBook. I just can’t get on with another OS. OS X just feels like home for me.

This could change in the future. Apple is charging ahead at an immense rate, and paying £1,000 for a machine that will only run the latest OS for three years is a lot at an average of £330 a year (and keep in mind that this is the bottom-end MacBook Pro, top-end ones can stretch to £1,700). Even if the ChromeBook lasts a year, that’s only £200 in a year.

I struggle to keep up and stay as current as I can.

Who Is the ChromeBook For?

There is a new market for this type of computer. There are people who this kind of machine fits. How about a person being introduced to the computer world, a child perhaps? Today’s computing experience is very different compared to when I was growing up. Computing was still very nerdy – the world of the Commodores, Acorns, and early Windows boxes were not for the fainthearted. Today everything is easy, glossy, and just a click away.

My oldest is now 10 and becoming more and more interested in computing and using one every day. A £200 quick online machine would suit him.

He currently shares a Windows machine with his siblings; they use it for researching and typing up homework, watching YouTube videos, and playing online Flash games. They have no experience of installing applications, an operating system, setting up hardware, or resolving driver conflicts – and like most users these days have no intention or need to learn.

With Microsoft and Apple pushing towards Cloud computing and the dumbing down of Windows and OS X, a Cloud computer like a ChromeBook is just an early preview of what will eventually be the norm. It’s different from what people are used to. People were skeptical about the whole cloud computing idea, trusting your data to major corporations, but in this multi-device world where people expect to move from their desktop to their tablet to their smartphone seamlessly, cloud computing is the way to go.

Maybe the ChromeBook is not to be a Mac replacement. Perhaps it’s just an Internet device. A G3 and G4 Mac seriously lags behind on the Web. Even if there were mainstream browser and Flash support, the hardware would struggle to keep up – a G5 might be able to keep up, but Apple never made a G5 laptop.

When ChromeBooks first came in 2010, they were priced at £450, which is a lot for a browser machine. You could pick up a well spec’d Windows machine for that. However, the new ridiculously low price makes it something to be not instantly dismissed.

The design of the ChromeBooks is very slick. The CR-48 (not distributed to the general public) was fairly ordinary looking and unassuming. The Samsung Series 5 and Acer AC700 were slimmer, competing at the time with netbook craze.

The new ARM-based Samsung model looks very similar to a MacBook Air both in terms of look and size. The keyboard and trackpad look very similar. I have been a big fan of the 11″ MacBook Air for some time – perhaps this is where some of my interest for these “cheap” ChromeBooks come from. The Samsung is made of plastic (rather than aluminium like the MacBook Air) and has a different hinge position, giving a ridge on the top.

I have yet to handle a ChromeBook in the flesh, but I would be pleased to give it a whirl and see if it could be a real contender.

Cloud computing is going to continue to grow and these ultra cheap laptops could be something to watch out for.