I recently purchased a MacBook – an Early 2009 model – on the premise that (based on the Developer Preview at the time) it met the requirements for the forth coming Mac OS X 10.8 Mountain Lion, which is due out this summer.

Publisher’s note: Apple has not posted regarding hardware requirements for its forthcoming OS X 10.8, but those running the Developer Preview (DP) are learning which Macs will not install it. Based on these reports, it looks like many Macs running Lion and some that ran the first DP may be left behind. Historically, changes in the DP are mirrored in the release version. dk

My MacBook has a Core 2 Duo CPU and features the Nvidia 9400M graphics chip, which is the cut off point for many Macs. If your Mac features the integrated Intel GMA950 or X3100, then you were already out of luck with the first Developer Preview of Mountain Lion.

With the release of Developer Preview 2 on March 16, another shock culling of Macs is proposed, and this time it looks like it includes mine, much to my annoyance.

The latest requirement is that your Mac must boot into a 64-bit kernel. That’s okay, you might think, all Core 2 Duo Macs are 64-bit. Well yes, they but not all can boot into 64-bit kernel. For whatever reason, Apple decided that some Macs around the 2008/2009 era can only boot natively into a 32-bit kernel. There is a list, but I didn’t find it very definitive. 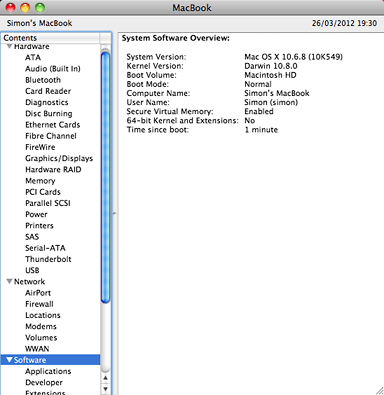 To check if your machine is automatically booting to 64-bit, have a look in your System Profiler under Software and there is a line that says “64-bit kernel and extensions” – if that says Yes, then you are fine.

To check if your machine is capable of booting to 64-bit, but defaults to 32-bit, hold down the 4 and 6 keys while pressing the power button. Once booted, then have a look in your System Profiler under Software and see what it says under “64-bit kernel and extensions”.

There is also a small tool called Startup Mode Selector that will tell you if your Mac can. Mine says technically it can, but Apple is stopping it. 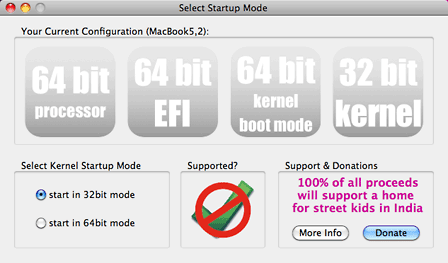 Why would Apple create a 64-bit machine that can’t natively handle the 64-bit kernel? Who knows. Next question is, why can’t it. It can’t be a hardware problem.

From what I have read, this has to do with the EFI (Extensible Firmware Interface) only allowing a 32-bit boot.

There are a few hacks floating around to enable 64-bit booting and native 64-bit kernels, but I am not sure if this will get you in the Mountain Lion camp.

Apple really needs to release a firmware update. They really are upsetting a lot of people – my MacBook is just over three years old, and Apple is already pushing it aside.

There is a small amount of hope that either a firmware update will be released in time, or Apple will backtrack and allow Mountain Lion on 64-bit Macs with 32-bit kernels.

Either that or are Apple is pushing more Macs into the low-end Mac bracket.

Follow up: Be sure to read Core 2 Duo Macs with 32-bit Kernel Can Run 64-bit OS X for updated information on this topic.