Apple laptops have always run on the hot side, especially compared to Windows machines. but does adding more RAM add to the problem?

The Titanium PowerBooks were the worst for heat, I have had four of them over the years (two 400 MHz, a 500 MHz, and an 867 MHz model), and the first generation 400 MHz models ran so hot you couldn’t use them on your lap. The 500 MHz was a little cooler, but it was still too hot for comfort.

I never really gave it much thought as to why; I put it down to pushing older hardware. Being a low-end Mac user, I have a box of spares that usually contains enough RAM to max them out before I started using them. So after a quick boot to ensure it worked, I would switch it off and upgrade the RAM and the hard drive if possible, and then install OS X if it was not already be on the hard drive – that I used to switch from machine to machine, a very handy feature of Mac OS X.

More recently I had some higher powered machines, a 1.07 GHz 12″ iBook G4 and then a 1 GHz 12″ PowerBook G4, both maxed with 1.25 GB of RAM before I got them. These also ran warm, especially when using processor-intense apps like iMovie, with the iBook kicking off more heat. I once again put this down to trying to do too much on an aging G4.

A few weeks ago I left the PowerPC Mac world and stepped up to an Early 2009 2 GHz Intel Core 2 Duo MacBook running OS X 10.6 Snow Leopard with 2 GB of RAM. It is lightning fast and doesn’t kick off too much heat, but still it ran warmer than I expected.

In anticipation of upgrading to OS X 10.7 Lion or 10.8 Mountain Lion in the near future, I decided to upgrade the RAM. Officially this Mac maxes at 4 GB (according to Apple), but unofficially it can take 6 GB (some have even installed 8 GB, but it becomes a little unstable at this point). 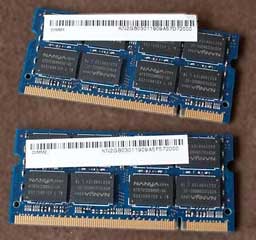 I removed the two 1 GB sticks and replaced them with two 2 GB sticks. Installation was easy, and within minutes I was booting up to a lovely 4 GB of RAM. This is the most RAM I have ever had in a machine.

Within a few hours, I noticed two things: The bottom of my MacBook was hotter than before, and the battery was draining more quickly. I wasn’t expecting either. However, searching around and emailing a few groups, this seems to be normal.

I set about doing some tests to see if it was just me being more conscious of it or if in fact it was true.

I tested the MacBook while it was idle. It had freshly booted into Snow Leopard with Dropbox and Echofon loaded automatically, and it connecting to my WiFi network. I then left it for five minutes to ensure it was idle. Using Temperature Monitor, I measured the sensors in my Mac.

I then watched a YouTube video for two minutes. YouTube and Flash-based sites push your processor and graphics chip and are one of the heaviest things the average user will do on their Mac. I took further temperature readings.

Here are my findings.

As you can see, the machine runs around 5°C hotter with 4 GB of RAM.

How about battery drain?

In a wide range of testing, there is not a noticeable difference in battery drain with either configuration.

Personally, I would have thought more RAM would have meant more breathing room for the machine, less stress on other components, and less writing to the hard drive, therefore cooler and smoother running.

However it seems that more RAM/higher capacity RAM kicks off more heat. My concern now is, Will the temperature skyrocket once I install OS X Lion or Mountain Lion? Some report it is lighter than Snow Leopard – “more optimised” – but others say it is heavier, and if it is heavier, it is going to push the temperature up.

Why do Macs suffer from this? I know all laptops – Mac or Windows – run warm due to the build structure and all those components in a small case, but Macs seem to suffer from it more.

It has been said that Apple reduce the fan speed on its laptops and increased the temperature at which the fan kicks in so as not to have the fans going full blast all the time.

What can I do? Do I install a program that lets me control the fan speed and cut-in temperature? Do I buy a heat pad that thermally draws the heat away from the bottom of the MacBook? Do I buy a cooling pad with built-in fans that either blow cold air to the bottom or suck warm air away?

I’m not sure, but one thing I do know is that if I want to run anything heavy on this MacBook, I am going to have to do something.