I love the Classic Mac OS, the Mac operating system prior to Mac OS X. Mac OS 8 has to be one of favourite classic OSes. 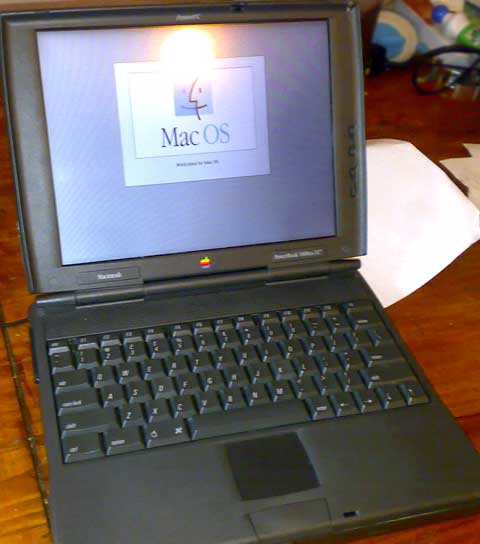 It came with Mac OS 9.1 installed, the highest version it could run, but it was rather sluggish, so I wiped the measly 1 GB hard drive and set about installing Mac OS 8.5, which I then upgraded to 8.6.

My previous experience with the Classic Mac OS had seen a tiny amount of using System 6 on some Mac Classics in 1991 and System 7 on a Mac SE/30 earlier in 2007. My main experience of pre-OS X was with Mac OS 9 extensively at work and at home from 1998 to 2002, when I upgraded permanently to Mac OS X. I loved Mac OS 9. I still use it occasionally, but the PowerBook 1400cs was my first experience of Mac OS 8.

Mac OS 8 was a massive overhaul over System 7. It brought some much needed features, such as a revamped Finder, contextual menus, spring loaded folders, and the ability to set pictures as desktop backgrounds. It also focused on a more colour-based OS. Okay, so these are hardly “features” – more additions and tweaks and things that Microsoft had brought to Windows 95 a few years prior.

It was the under-the-hood revamping and streamlining that made Mac OS 8 so much better than its predecessor, as well as features added in later releases.

Mac OS 8.5 was the first version of the Mac OS to run solely on PowerPC hardware and not on 680×0 Macs. It introduced Sherlock, faster networking, anti-aliased system fonts, and an easier installation method. Despite being a point release, 8.5 wasn’t free; it was more like a major OS release.

The Mac OS 8.5.1 update was free and was just bug fix update.

Mac OS 8.6, a free upgrade to 8.5/8.5.1 users, was the last version of OS 8. It offered better multitasking and multiprocessing. It was also the first version of Mac OS to show its version number during startup; previous versions just showed ‘Mac OS’, whereas now it showed ‘Mac OS 8.6’.

Under Mac OS 8.6, the PowerBook 1400cs was much faster. It was like OS 9 with just a few things stripped out. I would consider it the last useable version of Mac OS in this modern world. Like any older OS, it does have its downfalls and problems, but if you have a pre-G3 machine, I would recommend it.

Pre-G3 machines generally – especially laptops – used propriety RAM modules, so even now maxxing out RAM is an expensive affair. If you have the RAM, go for OS 9; if you have under 64 MB, I would stick with OS 8.

As someone who likes a challenge, I managed to get the PowerBook 1400cs to connect to my wireless network under OS 8 using a WaveLAN card.

Mac OS 8 is still a beautiful OS, and in its later revisions, one of the most stable versions of Mac operating system ever released.