I had to write this, as I have spent most of this weekend infuriated by Apple and its disgustingly aggressive planned obsolescence strategy.

As a PowerPC (PPC) Mac user, I am already at the low end of the Mac world and struggling to use my iBook G4 as an everyday machine – even for web browsing. 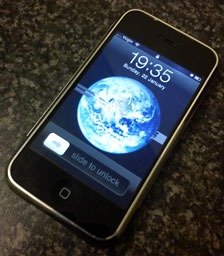 Over the weekend, I picked up an original iPhone at a bargain price, fully working but with some pixel outage on the screen.

I jailbroke it using Blackra1n and promptly went about setting it up, adding some music, syncing my contacts, and then off to download some apps. I’m a heavy phone user, but not a heavy app user. I email, surf, tweet, and Facebook.

So off I went to the App Store to grab the Twitter and Facebook apps, and . . . ah . . . then I stumbled across something that annoyed me. It annoyed me beyond anything in the last few months, even more annoying than the demise of the PPC platform. It annoyed me to the point that I nearly gave up on the whole iPhone idea.

No Old Versions of Apps for You!

You can only download the latest version of an app from the App Store. Search for Facebook on your original iPhone and try to install it, and it says “requires iOS 4.3”. I was not impressed. Okay, so I scrolled down thinking there would be an older version section at the bottom so I could pick one that was compatible with iOS 3.

Don’t get me wrong; I am not expecting to be able to run the latest version of an app or any app that was never released for iOS 3. But I know there were official Twitter and Facebook versions that ran on it.

I have never come across such a ludicrous, managed, hardware killing push like this before.

I am running Mac OS X 10.5 Leopard on my iBook – that’s two revisions behind the latest version of OS X, and some pieces of software will only run in 10.6 or 10.7, but the majority of them have a version that works with older operating systems. If these are not available on the software developers site, then places like mac.oldapps.com will have them.

Android Market works differently. It tailors itself to your device, your Android OS version, and your region. My Sony Ericsson X10 Mini Pro only has a QVGA (320 x 240 pixel) screen, so its market will only show apps that will work with that screen technology. It only runs Android 2.1, so anything that requires a newer version will not show up in Market and therefore cannot be installed.

Android “will just offer me the latest version that supports my setup.”

The whole “if your iPhone can’t run the latest version of the app then you can’t have it at all” idea sucks.

If you already had the older versions on your iPhone and synced it with your computer, you might be able to pull them in and reinstall them. I unfortunately didn’t, but being jailbroken it gave me a bit more freedom. I downloaded various versions of Twitter and Facebook apps in the form of .ipa files and found a few that worked. Check out the Gizmowebs article Downgrade Facebook App for iOS Devices for details on how to do it and where to get the Facebook apps from.

I realise Apple is a company out to make money, but killing off iOS 3 apps is not the way to do it. All that is going to do is alienate potential return customers and, for those who cannot afford to upgrade to a newer iPhone (which too will soon become obsolete), the only choice is to switch platform.

How much revenue will Apple lose or bandwidth will it suck just to keep iOS 3 apps alive for those who need them? Surely the small number of people still using older iPhones can still bring in revenue, even if those apps are slightly older.

You pay a lot of money for Apple computers and iOS devices, only to be cut off when Apple says so, therefore forcing you to make a new purchase, which is wrong. Apple and its attitude towards people who use older hardware is beginning to annoy me. It creates hardware that will easily outlive its Windows counterparts, but kills it off by dropping software support for the older hardware.

I love Apple hardware and software, but this is seriously something they need to think of before the next march on.