Apple had introduced the G5 processor with the Power Mac G5 in June 2003, and the amount of heat the G5 processor generated required a case designed to keep air flowing so the computer wouldn’t overheat. The G5 also used much faster memory than the G4, running at one-half or one-third of CPU speed rather than 133-167 MHz (which was 1/6 to 1/8 of CPU speed), so it was a bit of a surprise when Apple moved the iMac to G5 on August 31, 2004. With the new CPU came a new iMac design, the slab that remains with us to this day. For the first time, the logic board was vertical, placed behind the iMac’s display, which was intended to help airflow. (It also went back to a design Jonathan Ive had proposed for the iMac G4 that Steve Jobs had nixed.)

Alan Zisman (Zis Mac): I was invited to Macworld San Francisco for the debut of the G4 iMac – but even being present for the Steve Jobs reality distortion field keynote introducing that model, I always found the design quirky at best.

But I loved the slab-design of the G5 iMac. In a review I wrote at the time (see Apple’s G5 iMac: Wonderful in White), I called it “a stylish, space-saving, easy to set up and use (and virus and spyware-free) computer”.

Note that Apple has – with relatively minor modifications – kept that slab-design for it’s iMacs through to today. Their modifications to the design have not been entirely user-friendly – the whole back of that original model was easily removed, making it possible for users to upgrade the RAM, hard drive, optical drive, and more – or just see how it was all put together. In later models they made it much harder to access anything other than a little slot to upgrade the RAM. The G5 iMac is my favorite all-in-one computer because of the original iPod looks and also because it is a easiest all-in-one that Apple made that can be taken apart with three captive screws. The newer Intel-based iMacs only have a small opening on the bottom for RAM upgrades, so in order to upgrade anything else you have to remove the front glass/screen area. I have not had any issues with mine G5 even after taking it apart to clean it, upgraded the SATA 7200 RPM hard drive, and added some OWC RAM. 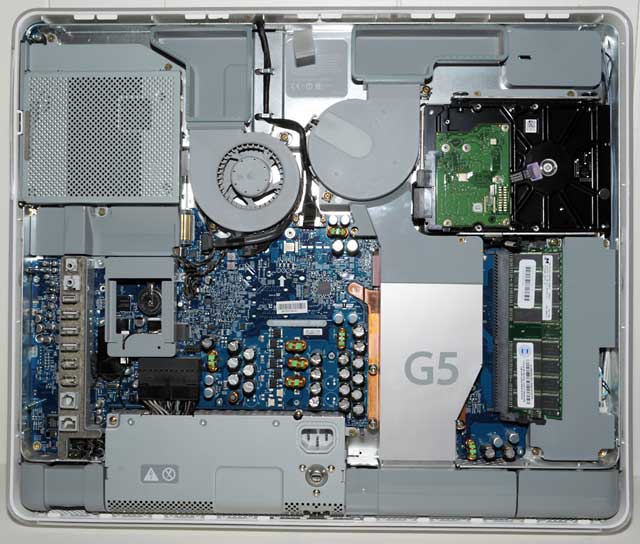 An important note is that if your are looking for a G5 iMac, get the last models made, because they have an iSight webcam, gigabit ethernet, use DDR2 memory, have a better video card, and shipped with the Front Row remote. My G5 iMac was one of the first released and does not have all of those nifty add-ons. 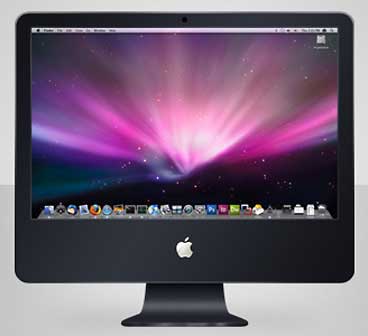 I use my G5 iMac as my photo dumping station, where it holds my 400+ GB photo collection using iPhoto ’09. It took a few days to load the pictures into the iPhoto library, but now it starts up in no time at all. I also have Photoshop CS4 just in case I need to do some editing if my main desktop is being used for something else. Overall this is a speedy machine with only 1.25 GB of RAM running Mac OS X 10.5.8 Leopard.

Something inside me always wished that Apple would have released a black version of the G5 iMac.

Dan Knight (Mac Musings): I have never owned a G5 Mac, but I would like to. Even though my G4s are adequately powerful (running dual 1.0 and 1.25 GHz CPUs), G5 Macs have some real advantages: faster processors, faster memory, built-in USB 2.0, and SATA, a faster data bus, for hard drives. A nice dual-processor or dual-core G5 would be my ideal OS X 10.4 Tiger machine for using Classic Mode, and since my OS X 10.5 Leopard Mac is primarily a bridge between the Tiger Mac and my Intel Mac min running OS X 10.6 Snow Leopard, even a single processor Power Mac G5 would do the trick. Best of all, SATA drives are readily available in high capacities and low prices.

But I’d also love to have a last generation iMac G5, the mode with built-in iSight. And not as a production machine, but as an extra computer for my grandson to play with, for guests to use, and maybe even as a recipe computer in the kitchen.

These G5s are all “someday” dreams, and they get more affordable by the month. Someday I’ll be able to go there.

Jason Schrader (Maximize Your Mac): Right now I own the one and only iMac I have ever owned and it is a G5. Its a 1.8 GHz version from the first generation. It’s reasonably fast, and I use it in my classroom for my students to make artwork on. I have a Core 2 Duo model right next to it, so it’s easy to compare the two. First of all, the G5 iMac is much heavier with a thicker chassis and the I/O are in a different location. It also doesn’t have an iSight camera, which is fine as we rarely use the one on the Intel model anyway. It’s louder too, as I can actually hear it running even when under small loads. I think the design is quite nice, even though I would never buy a computer with a built-in screen as my main machine. As all iMacs are just too restricting as far as upgrades go, I still prefer the Mac Pros (Apple, those are way too long in the tooth, it’s time to upgrade).