More than any other product from Apple, the iPod has changed the company and the world. Before its introduction, MP3 players were the realm of small companies with limited budgets that were unable to provide content. After the iPod, the entire industry has evolved and grown to the point where the largest computer companies in the world have major interests in the digital music industry.

Contradicting an earlier statement made by Jobs scoffing at the flash-based MP3 market, Apple released its first flash-based MP3 player on 2005.01.11. The new player was the size of a pack of gum and cost for US$99 (for the 512 MB version). This made it a great value among MP3 players, with most comparably priced players providing half the capacity.

In order to keep the price of the device down, Apple scrapped the scroll wheel and LCD display. Without that interface, Apple hyped the device’s shuffle mode.

The shuffle was also the first iPod not to support FireWire.

In late 2005, Apple announced that its profits had quadrupled largely due to the iPod. They also announced that over 28 million devices had been sold, giving Apple a 75% market share for digital music players. Apple has had its best quarter since 1995, and financial giant, Goldman Sachs, predicts that sales would grow even more.

The newest iPods are also the ones that are the most different from their predecessors. They are both powered by dual ARM processors (Apple owns shares in ARM, the company that licenses the ARM CPU design to companies like Intel or TI) and a brand new version of PortalPlayer, the music player.

The iPod nano, introduced in September 2005, was designed in a little less than a year as the successor to the iPod mini – and it’s tiny. It was designed to mimic the look of hard drive-based players, but it’s quite different on the inside. It utilizes high capacity flash memory for its file storage, and it has a brand new scroll wheel manufactured by Apple.

Like the iPod shuffle, it has no FireWire support, and it was widely criticized for being too susceptible to scratching. It was available in 2 GB and 4 GB capacity in either black or white.

Introduced weeks later (in October 2005), the fifth generation iPod could be as significant to Apple as creating the iTunes Music Store was in 2002. Available in 30 GB and 60 GB versions in either white or black, the 5G iPod is capable of playing videos purchased online (using software from PortalPlayer).

Michael Iger, the CEO of Disney, agreed to allow Apple to sell copies of ABC programming over iTMS. Talks had begun over a year before, but Jobs and Disney CEO Michael Eisner didn’t get along, and the technology was not yet inexpensive enough.

The 5G iPod is up to 30% thinner than previous models, although the other dimensions are the same, and it was the first full-sized iPod that didn’t include FireWire support.

Both the nano and video-enabled iPod are equipped with more and more features, making the devices behave more like PDAs than pure music players. They are both equipped with calendar and address book viewers, but they also feature a suite of games, a screen saver, and a PIN screen.

Apple updated the “video iPod” (never its official name) in September 2006. Generally known as the 5.5G iPod, the revised version has a brighter display, longer battery life when showing videos, and moved the top end to 80 GB.

Honey, They Shrunk the shuffle

And it was tiny, barely big enough for a clickwheel. The 1 GB aluminum shuffle was available in blue, green, orange, pink, and silver, and it was so small that there wasn’t room for a dock connector or even a mini USB port. Instead, Apple devised a way to connect the new shuffle to USB through the headphone jack using a special cable.

Steve Jobs announced the iPhone during the Macworld Expo keynote address in January 2007. The iPod-sized device runs a mobile version of OS X and was unlike any smartphone that preceded it. Unlike any previous iPod, there was no scrollwheel at all. Unlike the traditional cellphone, there were no buttons for dialing phone numbers. The iPhone had (and still has) only one button on its face; everything else is handled via its 3.5″ 480 x 320 touchscreen or small buttons on the top or left side.

The iPhone runs a custom version of OS X and supports both AT&T’s Edge wireless technology and 802.11n WiFi. It syncs with the Mac’s address book, includes Apple’s Safari browser, has all the functionality of a video iPod, and introduced innovations including a soft keyboard and the ability to automatically rotate screen content based on the iPhone’s orientation.

It wasn’t cheap. With 4 GB of flash memory, the entry-level iPhone sold for US$499 with no rebates from AT&T Wireless. The 8 GB version sold for US$599.

The iPhone was released at 6:00 p.m. local time on Friday, June 29, 2007. It was available only in the US and exclusively through The Apple Store and AT&T Wireless (previoously Cingular) company stores. Apple reported sales of 270,000 units in its first shipment, and AT&T noted that 147,000 were activated that first weekend.

iSuppli calculated that the iPhone accounted for 1.8% of US mobile phone sales in July 2007, nearly double Apple’s 1% goal. AT&T reported it as the best selling model it had ever carried, and Apple projected sales of 730,000 units in the July-Sept. timeframe, which would mean 1 million iPhones. 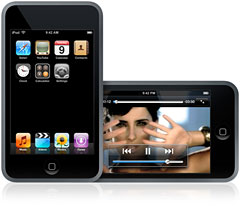 The real excitement comes from the iPod touch, which looks a lot like the iPhone. In fact, it’s basically an iPhone without the phone and camera – it runs the same operating systems, has 802.11n WiFi, and is a bit smaller than the iPhone. And it trumps the iPhone in one area: You can buy a 16 GB iPod touch, but the iPhone tops out at 8 GB.

The traditional full-sized iPod was renamed the iPod classic (a name Apple paid $1 million to use with the 1990 Macintosh Classic) and was to be the last hard-drive based version of the iPod. It had a new interface that included Cover Flow, a feature introduced with iTunes.

The iPod classic was discontinued in September 2014, marking an end of hard-drive based iPods.

The iPod nano has gone from a slim, brushed aluminum design to a wider, powder finished aluminum one to make room for a new 320 x 240 very high resolution (204 dpi!) 2″ display. Like the iPod classic, it also has cover flow, and it’s the first iPod nano that can be used to watch videos or play games.

Then there’s the third generation iPod shuffle, which looks a lot like the 2G iPod shuffle it replaces. The big difference is the finish, which is a powdered aluminum rather than brushed aluminum. The five colors available are light gray, light teal, light purple, light green, and [RED].

As before, there’s only one capacity – 1 GB, enough to store 240 songs on average. Like the model it replaces, it retails for US$79.

But the Sept. 2007 announcement goes beyond iPods. Apple discontinued the 4 GB iPhone while slashing the price of the 8 GB model by $200 to US$399, announced the iTunes Wi-Fi Music Store for the iPhone and iPod touch, and began selling ringtones for the iPhone for US$1.98.

Apple’s next improvement to the iPod line came on 2008.02.05, when it added new, higher capacity versions of the iPhone and iPod touch. Each doubled capacity at a US$100 price premium, so the 16 GB iPhone retailed for US$499, and the 32 GB iPod touch listed at US$499.

iPhone 3G: Twice the Speed, Half the Price

The iPhone 3G was introduced in 22 markets on 2008.07.11, and its software was available as an upgrade for owners of the original iPhone. Perhaps the most significant change was the introduction of an iPhone App Store, where iPhone owners could download free and commercial programs for their iPhones.

The iPhone’s 3G technology theoretically doubled Internet speed, although that varies from locale to locale and has been the subject of numerous lawsuits. The 2008 iPhone is available in 8 GB and 16 GB configurations worldwide and a 4 GB configuration in select market.

In the US market, the iPhone 3G sold for $199 with a 2-year AT&T service contract – half the price of the original iPhone.

The entire iPod line was updated on 2008.09.09. The iPod shuffle remained the same – same design, same memory capacity – but with a different color palette. The iPod classic line was simplified with a single 120 GB model replacing the previous 80 GB and 160 GB ones.

The 2G iPod touch gained a built-in speaker, volume buttons, and iPhone OS 2.0 (also available as a software upgrade for the original iPod touch), and the iPod nano was completely redesigned once again. The 4G iPod nano went back to a tall, narrow design, and the vertical screen supports rotation, just like the iPod classic. It also offered an extensive color palette.

One of the clever new features of the 2008 iPod touch and nano is “shake to shuffle” – because there are no moving parts, users can shake the iPod to have it shuffle to another track.

Apple decided to make the iPod shuffle so small that there wasn’t room for controls. The 3G iPod shuffle (introduced 2009.03.11) only functions with Apple’s special earbuds, which have a 3-button controller for this model – and only this model.

Apple reverted to the 2G Shuffle design on 2010.09.01 and has only changed the color range since then.

Apple seems to be pouring all of its creativity into the iPod nano. The 5G nano (2009.09.13) gained a wider screen for movies when held sideways, and the 6G Nano (2010.09.01) went with a completely square touch screen, the first Nano without a clickwheel.

iPhone and iPod touch since 2008

The iPhone and iPod touch are really in a different category from the iPod, since they are iOS devices, and we’ll eventually cover their history in a separate article.

This article was originally published on 2007.09.06 and has since been updated.