Now that Apple has kicked the first version of the Mac Pro out of the family, I think it’s safe to say that it’s now part of our family – a low-end Mac – yet one with extraordinary power waiting to be uncorked. I happened to receive one of these venerable Macs recently. To be specific, it was the bog standard model for Apple that year with two 2.66 GHz CPUs, 1 GB of memory, a 250 GB hard drive, and a 7300GT video card. Although this Mac will never run the newest version of OS X (10.8 Mountain Lion at the time of this writing) without some tinkering, it has a load of potential in that it can be upgraded significantly.

I am going to strip this thing down and see what we can get out of it, and when I am finished, it will become my media and storage server. It will also be used for some photo manipulation. That being said, I will choose my upgrades accordingly.

Taking the Mac Pro apart for upgrades is straight forward. This article is not a step by step guide, as there are several of those around the Web already. This is a look at performance before and after hardware upgrades. 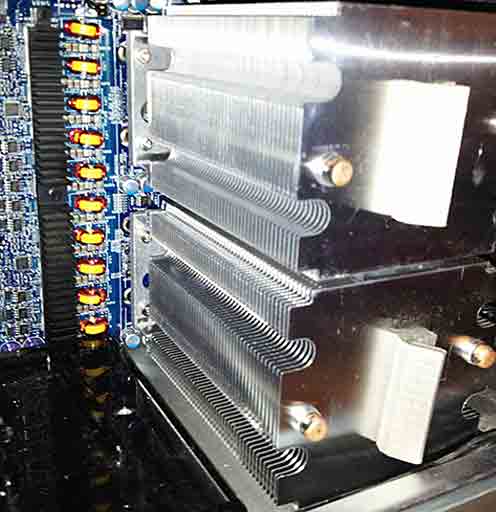 Either one is a good deal for getting 8 cores. I would have liked to get the faster 3.0 GHz 5365s, but the 5355 seemed to be a better deal at half the price. The new 5355s went right in and no modifications were necessary.

Unfortunately I do not have before (stock CPU) benchmarks, and because of that, from this point forward all benchmarks were done with 8 cores at 2.66 GHz. There are several cases when those extra cores will come in handy, especially in rendering, filters, and effects in photo and video editing, as well as 3D software use. I noticed that when transferring all of my files to this Mac, all eight cores were running. When multitasking, I also noticed that in many cases, again, all eight cores were loaded.

The new CPUs will run hotter than the stock dual cores, but I did not notice any changes in fan speed. It is still the quietest computer in my house. 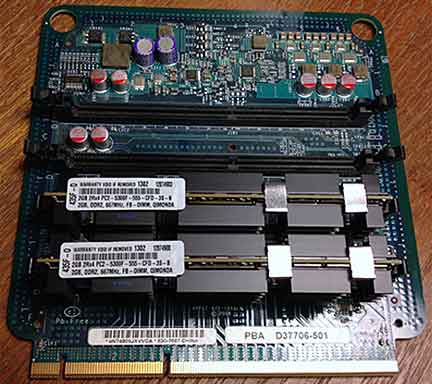 Memory is cheap right now, even the FB-DIMMs required for this older Mac are affordable in my eyes. I upgraded from a paltry 1 GB to 9 GB for only $75. Any computer, Mac or PC, should be running with 8 GB or more at this point in time. That is the new sweet spot. Make sure if you do purchase memory for your Mac Pro that it has the correct heat sinks installed. (These run very hot and need those heatsinks because of the low spinning fans.)

To test for improvements, I ran Photoshop CS6 benchmarks on a 395.5 MB image file. As I expected, the memory upgrade did great things for Photoshop. The time it took to run the test filters went from 105.9 seconds to 53.5 seconds. Xbench showed no change at all, staying at just below 190.

All tests were done with a Crucial M4 SSD installed as the OS/application drive.

This Mac had a decent amount of space for an OS and software to be installed, but the drive was old, almost seven years old. (I only keep my drives through their warranty, which is usually five years, if you use Western Digital Black drives, and then destroy them.) I pulled out the stock Seagate drive and replaced it first with a 250 GB 7200 rpm Western Digital Blue drive. I saw improvements in drive speeds in Xbench. 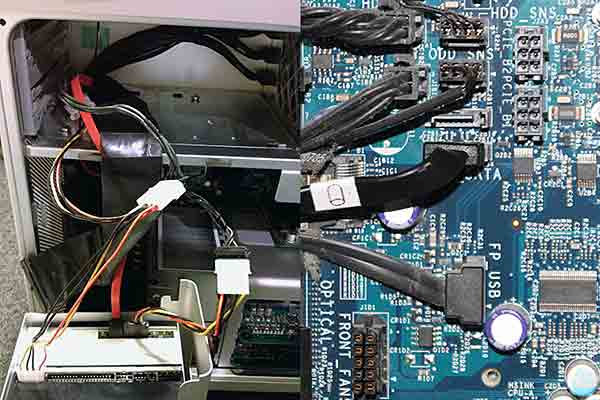 The real tests would come later when I would get frustrated with how slow that drive was. I use SSDs in all of my machines and have become accustomed to the speed increase. In my opinion, this is the single best upgrade one can make for the money. I swapped in a Crucial M4 128 GB (barely big enough for daily use – I recommend at least a 256 GB model) – and things really began to shine.

When you look at the benchmarks, remember that this SSD (or any for that matter) will be strangled by the 3 Gbps SATA speed of this Mac Pro. It’s fine for hard drives, but SSDs will saturate the speed of connection. There are options out there for PCIe cards that run at a faster 6 Gbps, but I don’t believe the limited hands-on use of this machine warrants one. If this were a premiere Pro machine, I would definitely run a hardware RAID card. 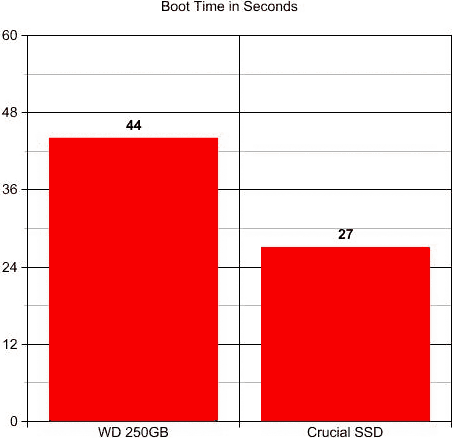 To the left is a list of benchmarks made with the SSD as the operating system/software disk showing the boot times from the push of the power button to the desktop.

In the next graph, we take a look at application load times. Lower is better, and the standard hard drive was not tested with the Adobe software. 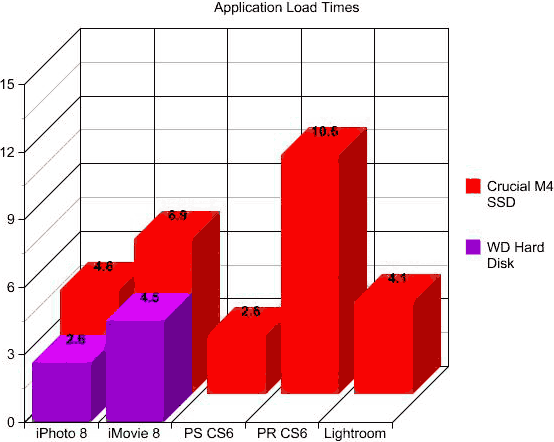 I also set up two 640 GB Western Digital Black drives in a RAID 0. This is for storage, and as I needed it to be as fast as I could afford, a striped set seemed like the best way to go. I would prefer a RAID 10 with four disks, but I am focusing on what’s affordable right now. I do plan to add another 3 TB hard drive in the near future that will be just for video files.

While I had the computer open, I decided to use a Lite On DVD SATA burner to speed up file transfers. You can pick one up for $18. I needed to use the extra SATA port as well as a Molex splitter and Molex-to-SATA power convertor. It can be tricky to get all of the new cabling in place, but rest assured, it is possible to run all those extra cables through that smallish hole leading to the main motherboard compartment. I recommend it, as you will be able to burn DVDs up to 6x faster.

Blu-ray is another option. I plan to try one out in the near future.

I think the 2006 Mac Pro is still very useful and very powerful in the configuration I went over today. Bone stock, this Mac is starting to show its age, but it still has so many possibilities that it is still a great buy if you can find one at the right price.

Is there any reason to not get a Mac Pro from 2006? As I mentioned earlier, it will not run the newest Apple OS and there is still no USB 3.0 (unless you want to spend around $75 more for that). There are no Thunderbolt cards at this time, and even if they become available, there is the chance they may not be compatible. Lastly, unless you cough up another $75, the SATA speeds are going to be lower than today’s Macs with 6 Gbps SATA.

Lets take a look at the total cost to the this rig up and cooking.

The grand total get us $827, with the upgrades costing $427. That is a pretty affordable Mac, especially considering it has 8 cores, an SSD, and plenty of memory.

What would a new, similarly configured Mac Pro cost? Well, a 6-core model with larger SSD and a bit more storage costs over $4,000!

I think its worth holding on to those aging Mac Pros a little longer – at least until the new 2013 Mac Pro comes out.