Apple became a household name in the third quarter of SuperBowl XVIII when it aired the enormously popular 1984 ad promoting the upcoming release of the Macintosh.

Apple’s PR firm, Chiat/Day, had pitched a similar ad in 1982 to promote the Apple II. The basic premise was that the Apple II would only enable people, and not hinder them with inane commands and hard to understand interfaces.

No executives were particularly enamored with the spot, and it was filed away for possible later use.

A year later, Chiat/Day was tasked with creating an advertising campaign for the upcoming release of the Macintosh. The agency prepared a spot titled Manuals that featured an IBM XT and a pile of the manuals which were bundled with the computer. The camera would then show a Macintosh with its single user’s guide floating down to land near the mouse.

The ad didn’t find many champions in the corporate hierarchy, so Chiat/Day, on the advice of Steve Jobs, restarted production of the shelved 1984.

Jobs wanted a blockbuster for his product. Chiat/Day’s copywriter and art director, Steve Hayden and Brent Thomas, created a tentative storyboard to present to the newly installed John Sculley for approval. The storyboard featured hundreds of men listening to Big Brother on a huge screen delivering a speech on the virtues of censorship. In mid-speech, a model runs into the room and destroys the screen with a baseball bat, freeing the men from Big Brother’s grasp.

Steve Jobs was thrilled with the commercial. He thought that it would generate a buzz for the Macintosh without even featuring the product itself.

Sculley, the creator of the Pepsi Challenge and Pepsi Generation while he was VP at PepsiCola (PepsiCo’s beverage wing), disliked the ad but was willing to defer to Jobs. The ad was approved, and Chiat/Day was told to buy the airtime during SuperBowl XVIII.

Chiat/Day hired Ridley Scott (Alien, Blade Runner) to direct the commercial, and the agency was given a budget of $900,000 to produce 1984 and an ad for the Lisa titled Alone Again.

Shooting began in September in Scott’s native Britain. He assembled a cast of British skinheads to populate the auditorium where Big Brother delivered his speech. Unfortunately, Scott was unable to get the necessary number, so he paid amateurs $125 a day to shave their heads.

Casting for the heroine was more difficult. The baseball bat had been swapped for a more dramatic (and unwieldy) sledgehammer. The models that showed up for the casting call were physically unable to throw the sledgehammer safely or attractively. Luckily Anya Major, an experienced discus thrower, tried out for the part.

The ad was the pride of the entire agency. They were confident that 1984 would generate a tremendous interest in not only the Macintosh, but all Apple products.

Unfortunately, Apple’s board didn’t concur. When the board was shown the ad, cofounder Mike Markula suggested that Apple drop Chiat/Day altogether. The rest of the board was not impressed either.

Sculley was discouraged by the board’s reaction and asked Chiat/Day to sell back both timeslots to CBS (the commercial was to air uncut during a one-minute spot, and an abbreviated version would be aired during a thirty second spot). If a buyer could not be found, Manuals would be run instead. Chiat/Day defied Sculley and only sold the thirty second spot.

Steve Wozniak, who was still friends with Jobs at the time, heard about the board’s refusal to support the ad from Jobs, who also showed it to him. Wozniak loved the ad and offered to pay for the spot personally if Jobs was unable to get Apple to air the ad.

When Jobs told Sculley of Wozniak’s support, he gave the decision to marketing manager, Bill Campbell (future CEO of Intuit), who loved the ad. Manuals was scrapped. 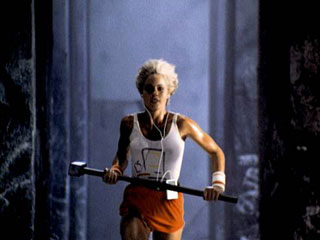 Contrary to popular belief, 1984 did not run just once. In order to make it eligible for Cannes, Apple bought airtime on KMVT in Twin Falls, Idaho at 1:00 AM in December 1983. On January 22, six weeks later, the ad aired for SuperBowl XVIII (between the Redskins and Raiders in Tampa Bay), and it was a sensation. The ad was awarded the top prize at Cannes and was replayed constantly on news programs following the game. Chiat/Day estimated that 1984 generated over $5 million in free publicity.

Response to the ad was so strong that Apple bought months of ad time on ScreenVision, a company that sold ad time in movie theaters. Because they were so enamored with the commercial, some owners re-aired the ad for months after Apple’s contract ran out with ScreenTime.

The 1984 ad is considered the greatest commercial in the history of the SuperBowl, and it was updated in 2004 – the ad’s 20th anniversary – to include an iPod.