It’s been a while.  Life and other typical duties keep one busy, but when something extraordinary comes up, there’s always time to talk about it with our community.  In this article, I will be discussing an interesting piece of hardware (a display to be precise) – the RCA MM36100.

Here’s some general facts on this 190 lb beast from the official brochure from RCA: 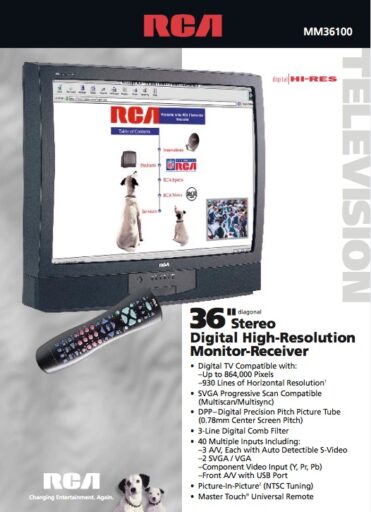 Take a look at the inputs on the back:

As you can see, there are 2 VGA inputs (one with standard L/R RCA stereo audio inputs and another with line-in 3.5mm stereo audio mini-jack input) on the RCA MM36100 in addition to multiple S-Video, Component Video (480i/240p), audio outputs (including speakers) as well as RF antenna and even a built-in USB hub. This monitor truly has it all!

The most amazing part of this display is how it will handle RGB video from a proper system.  Here, I have my Titanium PowerBook 1.0 GHz connected to the display starting up Mac OS 9 and then playing some Doom II. 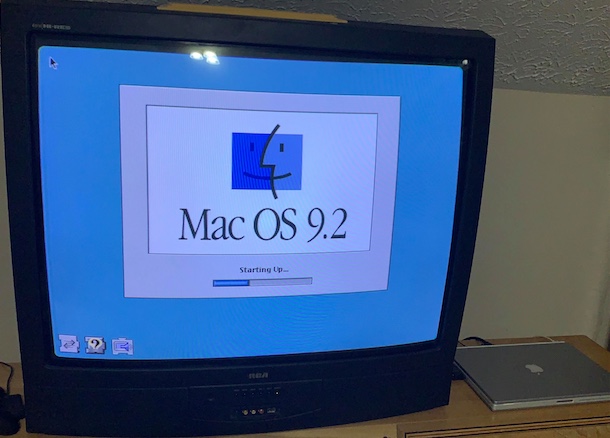 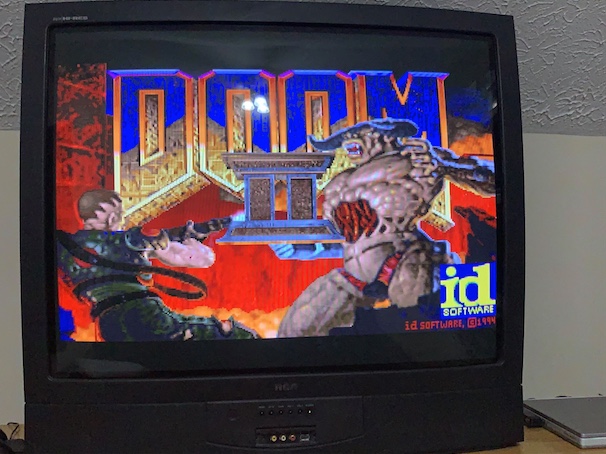 The RCA MM36100 allows you to perform all kinds of adjustments right out of the available menus and then have your preferences then saved as a user preset.  It even has additional options on the PC VGA input to have the image be optimized for text or video.  Optimized for video selected seems to be slightly sharper, but both options look impressive.  Being able to make some quick adjustments to really center the Mac OS operating environment come in handy immediately.

2. I’ve never seen such a razor-sharp images for text and the OS interface on a CRT of this size before!

At 930 lines of horizontal resolution, there are Sony PVMs (Professional Video Monitors) and Sony BVMs (Broadcast Video Monitors – truly the ultimate CRT monitor) from the early 2000s that this display tends to fall between in terms of overall image quality.  This RCA MM36100 is maybe right on par or dare I say – even a touch better than the average PVM, but not quite as good as a BVM.  You are truly getting amazing, top-notch visuals on this display when devices of the era this display was produced are connected to it.

Where this display really wins hands-down is with its size.  Only a couple PVM or BVM models were produced in this size or greater and the odds of finding a large PVM or BVM are extremely low.  At 36″ on a “prosumer” (professional line consumer) display, it allowed a high quality, large size professional grade monitor to be delivered to consumers at a fairly reasonable price, which leads me to my next point..

3. It’s a far better value than Sony’s PVMs and BVMs

4. The RCA MM36100 is historically significant

This display was one of the very first high-definition monitors sold in the Western Hemisphere.

HDTV was available in Japan/Asia starting as early as the late-80s/early-90s, but the infrastructure to support these great new displays was not largely ready in North America (in particular the United States) until the early 00s.  Many television stations and cable companies in the United States had to do a significant amount of preparation for transitioning from Analog to Digital broadcast (analog broadcast officially ended on 6/12/09), so at the time when the RCA MM36100 was being marketed and produced, not too many TV manufacturers were jumping in masses on the HD bandwagon, coupled with the fact that HD content simply was not yet being widely available yet.  However, pioneering satellite company, DirectTV decided to partner with RCA and offer a solution to accompany the RCA MM36100 – the DTC100 HD satellite and over-air HD receiver.  There is a very good read on this device here.

Going back to the fact that there are 2 VGA inputs on the back on the RCA MM36100 and one of those has a simple L/R RCA audio and VGA input meant for 480p video, there is one device that was a perfect match..

None other than the Sega Dreamcast! 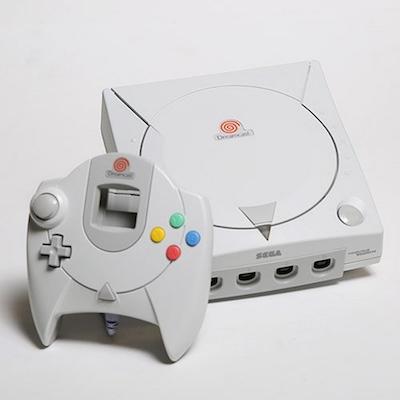 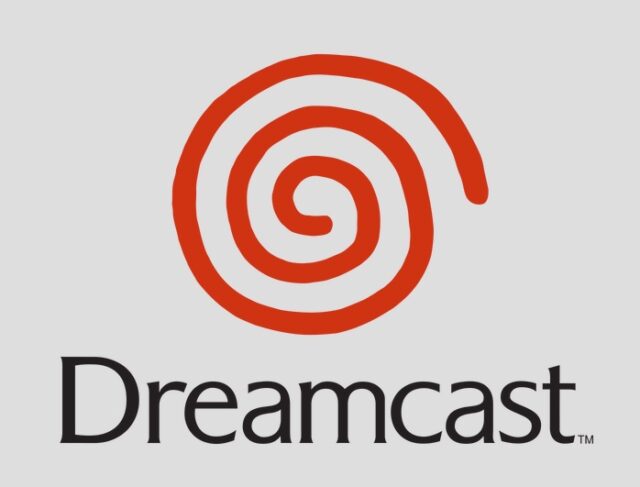 The Sega Dreamcast was way ahead of its time when it released a little over 20 years ago, quite famously on 9/9/99: 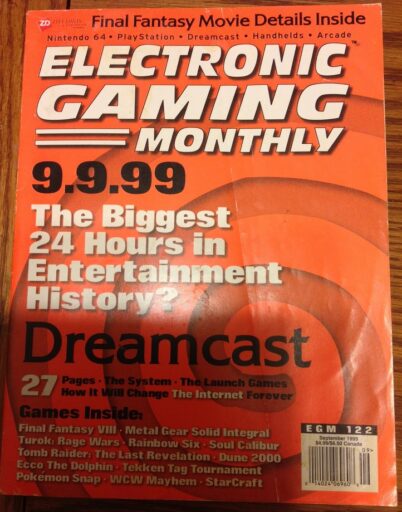 What made the Dreamcast significant was a number of technological advances including being the first dedicated game console to come standard with a 56k modem and had an optional broadband adapter as well as being able to output 640x480p over VGA.  A number of options exist to output VGA with the Dreamcast such as the “VGA box” that has both VGA and S-Video output using Sega’s high bandwidth video output interface on the Dreamcast to handle both options, but recent third party solutions have been able to simplify the design to a single VGA cable with L/R RCA stereo audio.  Nothing could be more meant for a monitor such as the RCA MM36100 such as these cables paired with the Dreamcast: 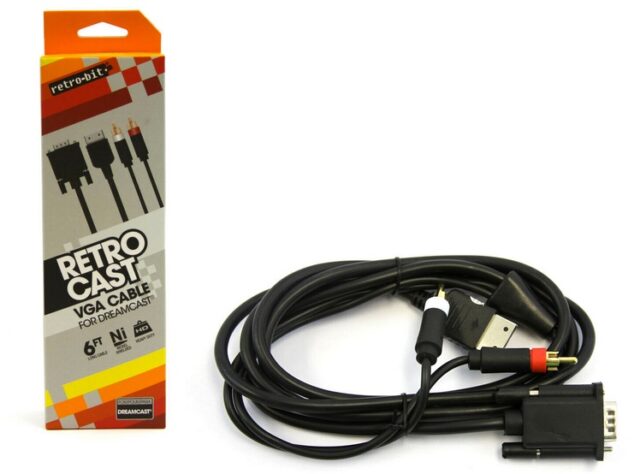 Here’s the result when playing Dreamcast paired with the VGA cable with audio from Retro Cast and using Marvel vs Capcom 2 as a test subject: 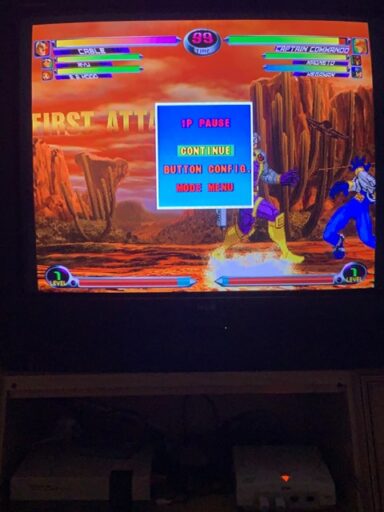 The quality of Marvel vs. Capcom 2 over VGA on the Dreamcast on the RCA MM36100 is absolutely amazing!

I want one too! Where can I find one??

That’s the tricky part with these things.  PVMs, BVMs and even presentation monitors that catered to “prosumers” like the RCA MM36100 were expensive (even though a fraction of PVM/BVM prices).  At $2200, not a lot of people were willing to plunk down that kind of cash when HDTV was such a new concept and the fact that most consumer grade components that could actually take advantage of Progressive Scan video (initially 640x480p at 4:3 aspect or 720x480p at 16:9 aspect) were being made to work with Pb/Pr/Y Component Video and not VGA like the RCA MM36100 (the RCA MM36100’s Component Video input is 240p/480i capable only).  As a result of pricing and limitations at the time, not a lot of these units likely sold.  In fact, when I began to investigate the listing for this display, it was the first one I had ever seen.  They are extremely rare.  You may very well run into an ad for a PVM or BVM before you see an ad for an RCA MM36100.  My advice is to look every week though on Facebook Marketplace, Craigslist, garage sales, e-Waste centers and maybe even the curb (I found an iMac G3 that way once).

Given how rare these are, avoid any haphazard DIY repairs as you could damage internal components easily and then be completely out of luck for replacement parts if anything proprietary is damaged/destroyed.  Leave repairs of these devices to professionals unless you have the proper training.

Large CRT (Cathode Ray Tube) displays can be very heavy – the RCA MM36100 weighs around 190 lbs.  My 36″ Sony Trinitron KV-36HS420 weighs a whopping 235 lbs.! Always have a friend or two help you when moving up or down a flight of stairs or get a moving company to assist if you are worried about navigating it to where it needs to go.  It’s not worth risking severe injury or even death over any object you have control over from a safety standpoint.

In addition – never open these displays yourself without proper training.  These devices need to be properly discharged.  Even when unplugged, a CRT display can carry a lethal amount of electricity.  Again – leave it to the professionals unless you know what you are doing and are able to follow the correct procedures.

GOOD LUCK ON YOUR QUEST FOR TRADITIONAL CRT COMPUTING/GAMING! It really gives you the look and feel designed for the era the technology was meant for and continues to gain steam these days for retro gaming.  Supply is limited, so do your research to determine what model CRT makes the most sense for how it will be utilized with your gear!