Hi Low Enders! It’s been a while, but like a fine wine some vintage Macs just get more sought after with age.  One of those happens to be the PowerBook G3 “Pismo”. 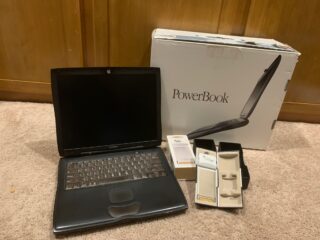 The Pismo PowerBook G3 was truly a “Swiss Army Knife” Mac for its day and is adorned by many currently, with a strong cult following.

The Pismo PowerBook was announced this very day 20 years ago while Apple was in the middle of their “Think Different” campaign – during the height of an era when Apple had the most powerful desktops with the Power Mac G4 line (famously dubbed the worlds’ first personal super computer) and most powerful portable machines with the G3 line and while “fruit flavored” iMacs and iBooks were all the rage in the consumer market.  The jet black Pismo was something of a statement machine in all of this though – a true engineering wonder.

While lots and lots of things have been said over the years about the Pismo, one of it’s most alluring features are its expansion capabilities.  The CPU can be upgraded and memory/storage upgrades take mere minutes!  Thanks to the hot swappable bay system, you could also pop in an extra battery for 10-12 hours of total runtime – unheard of during the era of the Pismo.  You can easily add a DVD-RW Superdrive or an extra hard drive (courtesy of modules like MCE’s expansion drive), a ZIP or VST Superdrive module and with a Cardbus slot, you can add USB 2.0, flash memory card readers and even an extra GPU such as Villagetronic’s VTBook with DVI output (pictured above-left with my Pismo with original box).

Due to the complete package the Pismo provided, consider the number of firsts it had “out of the box” that let it be as future-proof as possible.  While the Pismo was built to run Mac OS 9.0 natively, it also ran through 9.2.2, as well as the original builds of Mac OS X through Tiger 10.4.11, which released in 2005 and required Firewire and a DVD drive to install (all included on the Pismo).  The Pismo also was the first Apple “Pro” line portable with Airport wireless 802.11a/b, which provided a dedicated slot for the wireless card and let you keep your Cardbus slot available for something else.  With a CPU upgrade to a G4 500 MHz or 550 MHz, you could even get Leopard installed (unofficially) on a Pismo.  The 8 GB of VRAM is the only true bottleneck to running Leopard smoothly, but the simple fact that it was even possible let the Pismo stay (unofficially) supported through about 2012 (when Leopard was running out of steam) was truly a marvelous feat.  All in all, this is a portable machine that arguably lived a potential 12-year lifespan (if G4 upgraded and Leopard installed) – unbelievable for a device that was produced in the heart of the RISC era that had a mere sliver of the compute power of the Sandy Bridge and Ivy Bridge i7 Macs that were arriving when Leopard support was waning.  Stupendous for a device that spanned 7 generations of Mac OS and Mac OS X!!

Now that we all had some time to reflect on the marvel that the Pismo was (and still is today), here’s some of the Low End Mac staff’s personal experiences to reflect on with the Pismo:

“There’s not much else to say.  The Pismo rocked and still is a fun machine for me to pull out every now and then.  It was my first laptop.  I got mine as a birthday gift in August 2007 from a local seller when the prices were under $200 used in true “Low End Mac” fashion.  My fondest memories using the Pismo include using it as a central hub with my Sony PSP to sync Music, Video files and more.  I used the donationware app called PSPWare (developed by now defunct Nullriver) to sync my PSP, which can still be found in old application repository sites (version 2.5.504 is out there and will run great on the Pismo or any Mac running Tiger).  The Pismo also let me relax and enjoy a DVD in bed, be portable with the PS1 in Mac OS 9 courtesy of Connectix Virtual GameStation, or let me be productive drafting documents or browsing the web for research.  When the web was less bloated, the Pismo even ran YouTube decently.  It really did it all for me for a while in terms of a portable until I upgraded to a 1.67 GHz Hi-Res PowerBook G4 in early 2009.  I have not yet gone for the G4 upgrade in my Pismo (mine is a stock 400 MHZ G3), but I did put a fast 7200 RPM spinning drive and maxed out RAM to 1 GB.  Both of these tweaks really make Tiger blazing fast on the Pismo.”

“When I think of the Pismo, I think of possibly one the greatest Apple notebooks ever created. The Pismo was the very last modular Apple notebook ever and also the very last jet black professional line notebook. When I found my Pismo on eBay for $40 I was super excited. Pismos have one problem which made this one on eBay a “parts” system. When the PRAM battery dies, the system will no longer power on. It’s a simple fix and I saw it was still plugged in in the listing pictures. You just have to unplug the battery and it will power on and that’s exactly what I did in my unboxing video (https://youtu.be/w3wcMCAHbuM). Presto it turned on.

My system has been upgraded to the nines. I had Collin Mistr a.k.a. dosdude1 put a 550 MHz G4 on the CPU card (https://youtu.be/dVY8usdyCmY ). I converted the DVD drive to an UJ-831B DVD-RW/DL tray load which fit the factory face plate back on with no issue whatsoever other than one small hole drilling needed. This drive is essentially a SuperDrive from a late 2005 PowerBook G4 (only in tray load form), designed for cheap PC laptops from around 2005.

I learned about this drive from a fellow Pismo enthusiast’s project: http://www.jax184.com/projects/pismo/matdvdchart.html

I feel Apple should’ve really continued building systems like this. It had one the greatest typing keyboards ever created for a notebook and it was very very easy to do maintenance on. Just lift the keyboard and you had access to the CPU, RAM, and hard drive with just a few screws. Essentially everything on the system was modular and is very, very easy to replace or upgrade. Happy 20th anniversary to the Pismo! I hope mine continues on for another 20 years!”

So there you have it friends! Long live the Pismo!! Boot yours up today for old times sake!

One thought on “The Pismo at 20: An Enduring Legacy”