Each design of the Mac Pro over the years has had its advantages and disadvantages when it comes to overall system architecture and design, including the GPU (Graphics Processing Unit) options available.  Many factors are at play when determining what kind of graphics card you can run with your Mac Pro as these machines evolved over the years from the original Mac Pro 1,1 released in 2006 through the Mac Pro 7,1 released in 2019.  Everything from supported OS given graphics drivers available to power delivery and even various components of the CPU or logic board can wind up being limiting factors that you need to be somewhat aware of.  In short, you might be able to run the latest GPU on a new system, but might not be able to run that same GPU on an older system (even if patched to run the latest version of MacOS).  For example, while the Pixlas Mod can be done to the Mac Pro 5,1 and provide you with all the power you need for the most powerful GPUs on the market today and while the Mac Pro 5,1 can be patched using SurPlus or MonteRand to run Big Sur or Monterey respectively (which have drivers for the AMD “Big Navi” cards that include the Radeon 6800, 6800 XT and 6900 XT), you cannot just drop in a Radeon 6900 XT and expect magic to happen.  There are limiting factors on the logic board and CPU (leading theory at one point was lack of AVX instruction sets on the Xeon X series CPUs used by the Mac Pro 5,1) that do not allow these graphics cards to POST and function.

Without rambling on, here’s a diagram that depicts the evolution of the Mac Pro over the years and some key limiting factors of each era: 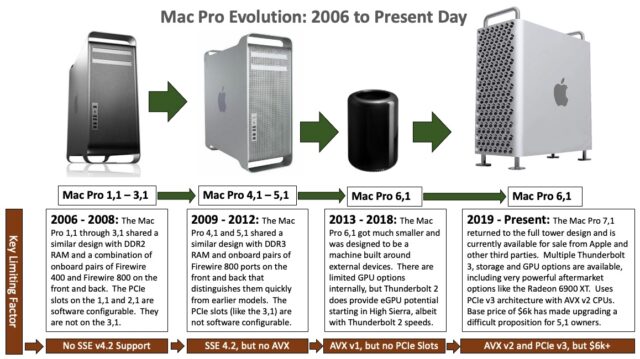 Limitations of the Mac Pro 6,1

Depending on your goal (whether trying to dual purpose your Mac Pro for both MacOS productivity and gaming in Windows or dabbling in Linux or just sticking straight-up with MacOS) – one choice of Mac Pro may be better than another, but one thing is for sure – all tower form factor Macs versus the Mac Pro 6,1 (known affectionately as the “trash can”) have a major advantage when it comes to overall graphics throughput.  This is due to the tower form factor Mac Pro machines having at least one PCI Express 16x connection on the board versus relying on the proprietary Mac Pro 6,1 GPU options (D300, D500 and D700 FirePro) or going with an eGPU solution, which may not be an ideal solution because of a couple limitations.  Between the Mac Pro 6,1 using a 4x Direct Media Interface link at 5 GT/s and with Thunderbolt 2 (limited to dual streams at 10 Gb/s in each direction), you’re stuck at no more than 20 Gb/s for eGPU, no matter how you slice it – which is more like 16-18 Gb/s considering overhead under real world performance.  While this is plenty for 1080p and 1440p gaming (even at high refresh rates such as 120Hz), it pushes the boundaries for 4K 60Hz content at even 8-bit pixel depth and will be a significant choke point for any kind of high-end eGPU solution, so anything more than the Radeon RX 580 with the Mac Pro 6,1 is just overkill.

Note:  A good alternative if you want to go the eGPU route is the 2018 Mac Mini with Core i7 8700 due to the machine not having its own discrete graphics, but this machine is saddled with the T2 chip and it has soldered storage, making it a more risky proposition than the 2017 iMac mentioned in one my previous articles, Best Modern Alternative to the Mac Pro 5,1.

Key Deciding Factors to Choosing a GPU for Your Mac Pro

When selecting a GPU for your Mac Pro, there’s many other factors (as mentioned previously).  Power draw, OS support, Metal performance and overall flexibility/compatibility when considering any of these various solutions and most importantly, price.  Lastly – there are also the considerations when booting into multiple OSes on the same Mac that will come into play.  Many fans of older Mac OS X software (such as Final Cut Pro 7 which required Snow Leopard or earlier since the installer was PowerPC based) and other PowerPC applications will need Rosetta for PowerPC compatibility, which was removed starting with OS X Lion (a consideration for all Mac Pro 1,1 to 5,1 owners).  Once you get to High Sierra (supported unofficially on the Mac Pro 3,1 and officially on the Mac Pro 4,1/5,1) and beyond you can’t have both a high powered Metal capable GPU (like a Vega 56 or RX 580) running in tandem with a lower powered non-Metal card (such as a Radeon HD 2600 XT) or the Mac just won’t boot into those newer OSes.  You’ll either get a crash/kernel panic, a loop where you get to the login screen and can’t get past it or will simply get an error message stating that you must have only Metal capable cards installed.  Additionally, some of those older non-metal GPUs are also no longer supported in Windows 10 (and presumably Windows 11), so these tandem GPU setups that once worked (that I even wrote about once) are just no longer viable on the Mac Pro like they once were.

In order to be the most effective, running a separate machine these days for legacy Mac OSes and legacy Windows and  running another for a modern build is probably the best way to go.  Perhaps setting up a Mac Pro 1,1/2,1 booting Snow Leopard and Windows XP SP3 with a Radeon 5870 for old games and Mac apps running alongside a Mac Pro 5,1 with the Pixlas mod and a Vega 56/Vega 64 or Radeon VII booting Big Sur/Mojave with OpenCore and Windows 10 or 11 is a smart approach?

With so many deciding factors and things to ponder, how could one possibly even know where to start?

I have just the thing… A handy matrix that really provides you with all the information you could possibly use.  This is too large to display nicely in web format, so click on the link to expand the view:

This article was long in the making that took many hours of research.  People have to hunt all over the web for the bits and pieces of this information when they are trying to get something put together for their Mac Pro to understand what is compatible and what might match up with their OS needs, but now it’s all in one place – in one handy document.  I hope you all find this information helpful and thanks for your patience as we continue to get more great content out there to add value to your Low End Mac!

One thought on “Mac Pro GPUs by Era”