Rolled out in March 1987 along with the compact Mac SE, the Mac II was the first modular Mac – a revolutionary change in the Macintosh line (so revolutionary that it had to be kept secret from Steve Jobs, who loved the simplicity of all-in-one designs). Options include two 800K floppy drives and a hard drive as big as 5.25″.

The Mac II was the first Mac that could be turned on using the power key on the keyboard.

The Mac II was introduced before Apple adopted SuperDrive floppies* and was never shipped with them; a Mac II must be upgraded to support an FDHD (floppy drive, high density, 1.4 MB) drive and high density floppies. With the upgrade and appropriate software it can work with 3.5” DOS disks in addition to 800K and 1.4 MB Mac disks. Without the upgrade, the Mac II can read and write 800K floppies in the SuperDrive.

Although Apple officially rates SCSI in the Mac II at 1.25 MBps, real world testing indicates maximum SCSI throughput is closer to 1.4 MBps. For best SCSI throughput, the Mac II should be used with SCSI drives that have a buffer.

The Mac II requires special PAL SIMMs when using 4 MB or larger SIMMs. Even then, it is limited to 68 MB. In comparison, the IIx, IIcx, IIci, and IIfx can all reach 128 MB. 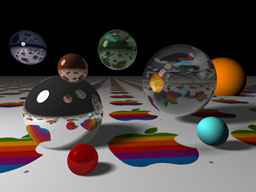 The ray-traced image to the right was created on a Cray supercomputer to show off the Mac II’s impressive color capabilities.

Considering the cost of upgrading a Mac II to accept more than 8 MB RAM, you are probably better off completely replacing it. You can buy a Mac IIx that already includes SuperDrive support for under US$20 these days – and a “wicked fast” 40 MHz IIfx for not much more. In any case, you can easily move your video card and other accessories to the new computer.

Because the battery is soldered to the motherboard, a dead battery might be a good excuse for replacing your Mac II with a IIfx. The alternative is hacking your own battery holder.

* Apple later used the SuperDrive name to indicate a drive that could burn DVDs. The two drives are completely different things sharing the same name.