Introduced along with the Mac II in March 1987, the SE came with 1 MB of RAM, one or two double-sided 800K floppies, and space to mount an internal SCSI hard drive (the second drive bay held either a hard drive or second floppy – no room for both, although that didn’t stop some people from creating a bracket to mount a hard drive in a two-floppy SE). The SE was the first compact Mac with a built-in fan. 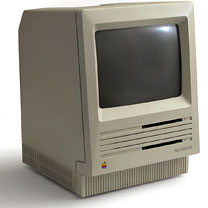 Although Apple officially rates SCSI on the SE at 1.25 MBps, real world testing finds it to be considerably lower at about half the rated speed. This is also roughly 2.5x faster than the SCSI on the Mac Plus.

Older SEs with their original ROMs do not support high density floppies. However, they can be used with FDHD drives as long as the disks used are 800K floppies.

The SE was introduced as the low-end cousin of the hot new 16 MHz Mac II. The SE was the first compact Mac with an expansion slot. One of the first add-in cards was an MS-DOS card. Over time, video, ethernet, and accelerator cards became popular accessories.

It’s not generally known, but the SE supports color, although not on the internal display. It’s only 3-bit color, but it supports output to the ImageWriter II printer’s color ribbon, and as least one company made a SCSI video output device that let the SE display 3-bit color on an external color monitor.

Color display? Aura Systems made ScuzzyGraph II, a SCSI peripheral that provided 8-color video for people who didn’t want to buy (or couldn’t afford) a Mac II. 1989 cost was $995 to $2,495, depending on resolution.

Some accelerators have onboard SIMM slots, allowing them to use more than 4 MB of RAM.

Color? Aura Systems made ScuzzyGraph II, a SCSI peripheral that provided 8-color video for people who didn’t want to buy (or couldn’t afford) a Mac II. 1989 cost was $995-2,495, depending on resolution.