Building on the success of the Mac II, the 1988 Mac IIx housed a 68030 CPU and 68882 FPU (floating point unit) in the same case. Breakthrough features included the DOS-compatible 1.4 MB SuperDrive (a.k.a. FDHD for floppy disk, high density) and virtual memory. Although advertised as a 32-bit computer, the Mac IIx ROMs were “dirty,” containing some 24-bit code. Running in 32-bit mode requires Mode32 (search the page for “mode32”). 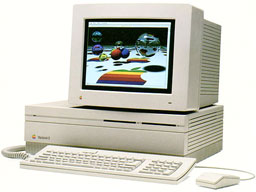 The IIx requires special PAL SIMMs when using 4 MB or larger SIMMs. With these it can support 128 MB.

There is a ROM SIMM slot on the Mac IIx which must be filled with a IIx ROM. Without this ROM, the computer will not function.

If you want more speed, consider upgrading to a IIfx instead of adding an accelerator. You can easily move your video card and other accessories (but not RAM) to the new computer.