Building on the success of the Mac IIx, the 1989 IIcx offered the same horsepower in a smaller case. This was made possible by eliminating 3 NuBus slots and using a smaller (90W) power supply. 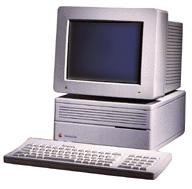 Although advertised as a 32-bit computer, the Mac IIx ROMs were “dirty,” containing some 24-bit code. Running in 32-bit mode requires Mode32 (search the page for “mode32”).

“The Mac IIcx has more potential to be a breakout machine for Apple than even the original Mac II. The latter showed that Apple could slug it out, head-to-head, with the muscle machines of the DOS world. The IIcx shows that Apple has learned to fit that raw power into the world of the office.” – Jim Seymour, MacUser, August 1989.

But the breakthrough here was that Apple designed the IIcx so it could be easily manufactured without using tools.

The Mac IIcx will not boot without a good PRAM battery installed.

Considering the cost of a used IIci or Quadra 700, it’s more economical to replace the IIcx than replace just motherboard – and you don’t have to worry about modifying your case to make the new motherboard fit.