Rolled out in January 1989, the SE/30 was the first compact Mac to come standard with the FDHD 1.4 MB floppy drive (a.k.a. SuperDrive) and support more than 4 MB of RAM. It was essentially a IIx in an SE case. 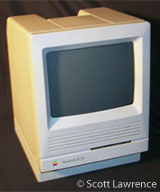 Although advertised as a 32-bit computer, the SE/30 ROMs were “dirty,” containing some 24-bit code, meaning it could not run 32-bit applications without new ROMs (which Apple never produced) or a software patch. To use the SE/30 in 32-bit mode, you need a free copy of Mode32 from Apple (search the page for “mode32”). (You only need 32-bit addressing if you have more than 8 MB of memory.)

The SE/30 offered the power of the IIx in a minimal footprint configuration. With the built-in 9″ screen, it was a popular network server.

The SE/30 has color QuickDraw built in, so it can be used to surf the Web. However, it requires a video card, such as the discontinued Micron Xceed, to display anything beyond black and white.

Aura Systems made ScuzzyGraph II, a SCSI peripheral that provided 8-color video for people who didn’t want to buy (or couldn’t afford) a Mac II. 1989 cost was $995 to $2,495, depending on resolution.

The SE/30 can handle as large a 3.5″ half-height SCSI hard drive as you can find, another reason it’s long been popular as a server. To remove the hard drive: find the two screws holding the drive bracket in place. They will be facing the rear of the computer and underneath the drive itself. You’ll need a fairly long Phillips screwdriver to reach them – and you’ll need to disconnect the power and data cables before you can get to them. Once the screws are loose, lift the back and it should come out easily.

There is a ROM SIMM slot on the SE/30 which must be filled with a ROM. Without this ROM, the computer will not function.

We’ve seen several claims that replacing the SE/30’s ROM with a IIsi or IIfx ROM makes the SE/30 32-bit clean and allows use of Mac OS 8.1 (with a lot of fiddling). We are interested in hearing from anyone who has successfully put a IIsi or IIfx ROM into an SE/30 – and whether you got OS 8.1 running or not. (Note that the IIsi ROM is rare; most have the ROM soldered to the motherboard.) Dan Knight, publisher.

After the SE/30, Apple didn’t produce another compact Mac with an expansion slot until the Color Classic in February 1993.