Introduced as the first sub-$1,000 Macintosh in October 1990, the basic Classic came with 1 MB of RAM, a SuperDrive, and space to mount an internal SCSI hard drive. The hard drive version came with 2 MB of memory and a 40 MB hard drive. RAM expansion was via a 1 MB daughter card with two open slots, which could accept a pair of 256 KB or 1 MB SIMMs. This made memory upgrades far easier than on the Plus or SE, since the motherboard didn’t have to be removed. At the same time, it means you should avoid any used Classic without 2 MB or more memory unless you have a source for the memory card. 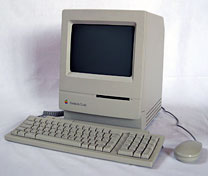 What Apple was thinking releasing an 8 MHz computer so late in the game is beyond me. By 1990, 8 MHz was just too slow for practical use, although that didn’t keep Apple from selling it or people from buying it. At this point, a 16 MHz Classic would have been sweet (see our review of the 16 MHz Brainstorm upgrade in a Mac Plus for details on that).

One new feature on the Classic was elimination of the brightness knob. Instead brightness was controlled with the Brightness control panel.

A feature unique to the Classic is the ability to boot from ROM by holding down command-option-x-o at startup. The ROM Disk is called “Boot Disk” and is 357 KB in size. The ROM Disk uses Finder 6.1.x and System 6.0.3 – this combination is specifically designed for the Classic. The only control panels are General, Brightness, and Startup Disk. MacsBug and AppleShare Prep are also part of the System, which loads into 294 KB of the Classic’s RAM. Because this is in ROM, there is no way to add anything to the ROM Disk.

The Classic was the last Mac to use the 8 MHz 68000 CPU. Looking at all the compromises involved in its design, we label the Classic a Limited Mac.

Color display? Aura Systems made ScuzzyGraph II, a SCSI peripheral that provided 8-color video for people who didn’t want to buy (or couldn’t afford) a Mac II. 1989 cost was $995 to $2,495, depending on resolution.