Despite the myths, Apple has never been a dominant player in the personal computer industry. Although the Apple II once accounted for nearly one-sixth of the market, the Mac has never had more than a 12% market share.

This and other statistics can be culled from Jeremy Reimer’s Personal Computer Market Share: 1975-2002, a very impressive piece of information gathering. The numbers tell some very interesting stories. 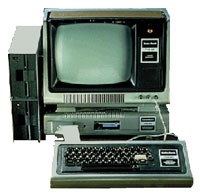 In 1981, Atari was the dominant player in the home computer market, a position it ceded to the Commodore 64 in 1983.

Ah, the Commodore 64 – 2 million units sold in 1983, and 2.5 million in each of the following three years. In 1983, Commodore commanded 40% of the PC market by offering the first truly affordable color computer.

IBM changed the industry when it released the IBM PC in 1981. It was the first popular 16-bit computer and only accounted for 5% of personal computer sales its first year out. IBM and the growing number of “IBM clones” moved to second place in 1983 with one-quarter of the PC market. The combined weight of the DOS market took the #1 spot from Commodore in 1985.

Reimer’s data shows that the Macintosh held 6% of the PC market when it was introduced in 1984, placing it behind the C-64, DOS computers, and Apple II series. Sales in 1985 were terrible with no new Macintosh models. The Mac Plus helped put some polish back on the Apple, and 1986 unit sales almost matched 1984 sales – but the Mac market share was only 4.2% and well behind the C-64, DOS PCs, and Apple II line.

It wasn’t until 1991 that the Macintosh took a serious share of the personal computer market, jumping from the 5-6% level to 11.2% that year.

DOS PC sales faltered in 1990 and 1991, dropping from 17.5 million to 16.8 million to 14.4 million units. This coincided with the era of Windows 3.0, the last version of Windows to really pale in comparison with the Mac OS. (There are still people out there using Windows 3.1, just as there are Mac users still devoted to System 6.)

Still, Windows 3.0 and a slump in the PC compatible market doesn’t explain how Apple boosted sales from 1.3 million to 2.1 million units – over 50% – in a single year. Several Apple developments do:

What kind of PC developments did we see in 1991? Increasing speeds in the 486 processor – and that’s about it.

With lower cost computers for the home and education market, a Mac designed for schools using Apple II software, 68040 power for graphics professionals, and innovative laptops that became the model for all future portables, Apple had one heck of a year.

The Commodore 64 and Atari STs dropped from the market in 1993, the same year NeXT got out of the hardware business. The Amiga went off the market in 1994, leaving just two platforms: Intel-based PCs (running DOS, OS/2, or Windows) and Macs.

Apple seemed to be on a roll and decided to allow other companies to license the Mac OS and build Macintosh clones.

Sales of Windows PCs, on the other hand, more than doubled in the same period. Apple dropped from 9% of the market to 2.7%. The word most associated with Apple in 1997-98 was beleaguered.

The clone experiment had to be terminated if Apple was to survive.

Apple bought NeXT, brought Steve Jobs back, and introduced the first Power Macs and PowerBooks with G3 processors in 1997. They aggressively marketed the “up to twice as fast” performance – including the famous Pentium II snail ad.

In May 1998, Jobs unveiled the iMac, which became the best selling computer on the personal computing market when it shipped in August. But Apple’s hardware sales were still in the dumper.

Recovery took hold in 1999, when Apple sold 3.5 million computers, which kept the Mac at 2.7% market share. All sales broke loose in 2000, when Apple moved 4.5 million Macs. The glory days were back, although that only represented 3.3% of the growing PC market, according to Reimer’s data.

In 2001 and 2002, Apple unit sales dropped to 3.0 million units for each year. Windows PC sales, which really grew in anticipation of Y2K, also declined in 2001 and made only a small recovery in 2002. If Reimer’s numbers are correct, Macs are now 2.3% of worldwide PC sales.

Still, Apple could go on indefinitely selling 3 million computers a year. The Mac may always be a minority platform, but it is a stable one.

Or Apple could go on convincing Windows, Linux, Unix, and classic Mac OS users to switch to Apple hardware running Mac OS X. The Apple retail stores, the gorgeous computers, the great ads, the brand recognition, the good exposure in the mainstream press, and the prodding of Mac loyalists can help Apple grow its share of the market – and help unleash things when the economy recovers and people are ready to spend a bit more freely on new computers.

Apple has always been a high margin computer. When I first got into computing, you could easily spend $2,500 for an Apple II+, two floppy drives, a floppy controller, and an Apple green screen monitor. With a color screen, you were close to the $3,000 mark.

Throughout its history, Apple has produced some of the most expensive personal computers on the market. And in the age of $200 Lindows PCs, Apple still does.

That’s not necessarily a bad thing. Lexus and Hummer aren’t known for low price, yet people continue to buy their products. Apple can survive as a 3 million unit per year computer maker for a long, long time.

Megahertz marketing, myths, and wars aside, today’s entry level computers offer plenty of power for anyone but the most avid gamer or video editor. Consumers are less interested in megahertz (that’s a geek thing) than in value – witness the amazing success of Walmart selling Lindows computers.

Macs are a good value. If that weren’t the case, nobody would buy them. But for most consumers, they are not seen as the best value when compared with Windows, Lindows, and Linux boxen. And that’s something Apple should address if it wants to become a real force in the consumer market.

Apple doesn’t have to sell a $200 stripped computer or a $350 computer system. It does have to compete with name brands such as Dell, HP, and Gateway offering $699 computer systems, and a $799 retread of the 1998 iMac simply isn’t going to cut it.

When the average consumer thinks of a computer, they visualize a keyboard, a mouse, a monitor, and “that other thing” – the computer itself. Except for the $1,499 and up Power Mac G4, Apple doesn’t offer this kind of computer.

The failure of Gateway, eMachines, and others to successfully sell all-in-one models should tell Apple something. All-in-ones are niche products, and if Apple continues to rely on them on the low end, it will remain a niche player.

Consumers want boxes, and Sony has learned how to deliver Vaio computers with style and competitive prices.

Apple needs to learn that lesson.

Sony doesn’t make the cheapest PCs on the market. They don’t offer the lowest prices, either. Instead, they are Sony products – innovative, attractive, and a bit more expensive. Those words should ring a bell for Mac users.

Apple could have been and should have been the Sony of the personal computer industry. Instead, it played the niche game and became the equivalent of an audiophile company – people will pay more for certain brands because they are connoisseurs.

Sony plays things differently. Their equipment isn’t generally audiophile quality, nor is it among the dregs of consumer electronics. Sony is noted for decent quality at a slightly higher price.

Apple could do worse than copy Sony, especially if they’re serious about growing market share. The iPod and iBook already show Apple can do it if it wants to.

Apple may always be a niche player. What they need to do is increase the size of their niche.

A low cost modular consumer PC – even a G3 system, as long as it supports Quartz Extreme – could be just the ticket to move Apple from today’s small niche to the kind of market share it had in the early 1990s with the low cost all-in-one Classic and modular LC for home and school, powerhouse Quadras for graphics professionals, and intelligently designed PowerBooks for computer users on the go.

Publisher’s note: In the decade since this was first published, Apple has gone on to dominate the MP3 player market, completely redefined the smartphone while becoming the leading brand, and created the tablet market that Microsoft never got off the ground while again becoming a dominant player. Despite that, Macs remain a small part of the PC market, although it is now the only growing PC platform.