There are a number of myths surrounding the Macintosh: It’s only for artists. There aren’t enough programs. It’s slow compared to Windows PCs. It’s terrible for gaming. And it’s always been overpriced.

Today we’re going to address the last myth, but first let me say that Macs are for anyone but high-end gaming addicts, have almost any kind of software you’d ever want to run on a computer (and so far none of the viruses or spyware that nobody wants), hold their own against Windows XP in terms of performance, and really are decent gaming machines for anyone but the most rabid gamers.

In recent weeks, there’s been a lot of discussion about a rumored $500 headless Mac. Should Apple release such a product, it will go a long way in dispelling the myth that Macs are overpriced. [Publisher’s note: The $499 Mac mini was introduced the day after this article was first published.]

Let’s look at the origin of the “overpriced” myth.

A lot of pundits have raised the point recently that the original Macintosh was supposed to be a $999 information appliance that somehow morphed into an overpriced $2,499 computer for the elite. That shows a terrible misunderstanding of history.

Before the Macintosh was unveiled in January 1984, the only computer on the market that worked the same way was Apple’s $9,995 Lisa, which included two high capacity floppy drives, a 5 MB hard drive, a 12″ graphical display, and Apple’s one-button mouse. 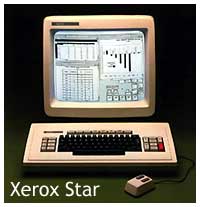 Although some will argue that the 1981 Xerox Star (left) was the first personal computer with a mouse and a graphical user interface, the Star was a networked workstation, not a freestanding PC. At $16,595, Xerox only sold about 25,000 units. (Apple may have sold as many as 100,000 Lisas.)

Still, the Star was the first commercial computer with a mouse, the first with a GUI, the one that laid the foundation for the Macintosh. (Another Mac myth is that Apple stole Xerox’s GUI. Nothing could be further from the truth. Apple paid Xerox for access to its research.)

1981 was the year IBM introduced its PC, a low-cost computer with great expandability. Users could buy the IBM PC with as little as 16 KB of memory, add a video card or two, add cards with I/O ports if they so desired, and even add a floppy controller and one or two floppy drives. (Like the Apple II, the original PC could be uses with a cassette tape player, although few – if any – chose to do so.)

Back then, $1,565 for a base computer was competitive. The Apple II+ was selling for about the same price with 48 KB of RAM – and the ports and floppies were optional, just like IBM’s PC. At least the Apple II supported a monitor out of the box; the PC needed an extra cost video card to display anything.

When Apple introduced Lisa in 1983, IBM’s popular model was the IBM PC XT, which had 8 expansion slot (vs. 5 in the original PC) and came standard with a CGA video card, a 5.25″ double-sided floppy drive (the first PC used single-sided floppies), and a 10 MB hard drive. It sold for $7,545.

The PC world was still using the Intel 8088 microprocessor, a kludged CPU that deals with memory as a series of separate 64 KB banks. Worse yet, IBM chose to use the 8088 instead of the 8086 to save a little money, somewhat hobbling performance by putting a 16-bit CPU on an 8-bit bus.

That’s the world the Lisa was born into, and the Lisa had it all over the IBM PC. The Motorola 68000 CPU has a 16-bit memory bus and linear memory space – no bank switching. Unlike the Intel 8088, which was limited to seeing 1 MB of memory (sixteen 64 KB banks) and which was limited to 640 KB in the IBM PC design, the 68000 could access up to 16 MB of memory, although Lisa only shipped with 1 MB and 2 MB configurations.

What kept the Lisa from commercial success wasn’t the price. It was the perception of IBM as a business computer and Apple as a home and education computer company. Selling the Lisa against IBM and the clones with their business software (WordPerfect, Lotus 1-2-3, dBase II) was an uphill battle.

The Macintosh project began in 1979, and the original idea was to build a low-cost information appliance. Yes, the goal price was $999, but the original Mac was going to be text-based (like the Apple II, Commodore 64, IBM PC, and everything else on the market). And it was going to use an 8-bit CPU, the Motorola 6809E, and have 64 KB of memory.

As Andy Hertzfeld writes, the Mac was only going to have a 256 x 256 pixel display (a step up from the 280 x 192 graphics of the Apple II). It wasn’t until January 1981 that the Mac team decided to give the Motorola 68000 a try. A good thing, too, as the first Mac shipped with a 512 x 342 pixel display, and that would have consumed over 30% of the 64 KB of memory originally envisioned for the low-cost information appliance.

After the introduction of the IBM PC, Apple knew what the competition was. The Mac had to have enough power, enough features, and enough difference to get people’s interest so they’d open their minds and pocketbooks. That meant keeping costs down – the Mac couldn’t be a $10,000 Lisa if Apple wanted to reach the masses.

The Macintosh wasn’t going head-to-head with the Commodore 64, Radio Shack Color Computer, or Atari 8-bit machines. Instead it was the next step in computing evolution, one that could compete with the IBM PC.

IBM introduced the AT in 1984, the next evolutionary step for the IBM PC. It was based on a 6 MHz Intel 80286 CPU, which was up to three times as efficient as the 8086. Like Lisa and Macintosh, the AT has a 16-bit memory bus. Unlike the Mac, it has expansion slots, an internal hard drive, runs IBM PC software, and supported the new EGA video standard (640 x 350 pixels).

No, it wasn’t the $999 information appliance Apple had once hoped to produce. It was a much more powerful machine that brought the Xerox PARC and Lisa concepts to a far more affordable price point.

Remember, memory was very expensive back then. A computer with 128 KB couldn’t sell for much less, let alone one with a built-in display. Later in the year, when higher density memory chips began shipping, Apple was able to offer a Mac 512K, but it cost over $3,000.

Put in perspective, the original Macintosh wasn’t the overpriced computer many pundits pretend it to be.