Apple took a completely different approach to ultralight notebook computers with the MacBook Air (MBA). Where netbooks used small screens, shrunken keyboards, and underpowered CPUs, Apple has gone very, very thin so the MacBook Air can have a 13.3″ LED backlit display, a full-sized keyboard, and a 1.6 GHz Core 2 Duo CPU – along with up to 5 hours of battery life without turning off AirPort.

New to the MacBook line is a large multitouch trackpad, which lets MacBook Air users do the same kind of things iPhone users can. The MacBook Air uses a special version of the Core 2 CPU that’s 60% smaller than usual.  (You can upgrade to a 1.8 GHz CPU for US$300 additional.) There is no built-in optical drive.

The MacBook Air is Apple’s first computer to support wireless NetBoot, and the Remote Disc software that comes with the MBA (on CD) can turn a Mac or Windows PC into a NetBoot server, allowing access to that computer’s optical drive from the MBA even for reinstalling the operating system. (However, you have to use a USB optical drive to install Windows for use with Boot Camp or virtualization. You can add an external USB 2.0 SuperDrive that is only compatible with the MBA for US$99.)

The MacBook Air has the same footprint as the MacBook, but it’s 2.2 lb. lighter and was the first Mac with a unibody aluminum design.

A few things are missing. This is the first aluminum Mac notebook since 1999 without FireWire, and it only has one USB port. There is no option to upgrade RAM from the 2 GB built into the computer, because it’s soldered to the logic board. There’s no built-in ethernet port; if you need ethernet, Apple sells a USB 2.0 ethernet adapter for $29. The Apple Remote is not included with the MBA; it sells for $19. 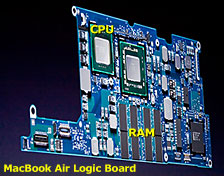 Like MacBook Pro models, the MacBook Air has a backlit keyboard, and it uses the same Intel GMA X3100 graphics processor as the consumer MacBook (this ties up 144 MB of system memory).

The MacBook Air is available only with an 18-bit glossy display, not the 24 bits you might expect. Like the iPod and iPhone, it does not have an easily replaceable battery. Cost to have Apple replace the 37 Watt-hour battery out of warranty is $130.

The MacBook Air was available in two configurations, which can be further customized:

With 2 GB of memory and no upgrade possible, OS X 10.5 Leopard and 10.6 Snow Leopard are your best OS choices, especially 10.6 since it is optimized for Intel. OS X 10.7 Lion is too demanding of resources to be practical on the original MacBook Air unless you’ve upgraded to an SSD, and even then you might not be happy with its performance.

Because you can’t upgrade RAM, your best upgrades are to replace the poky microdrive – or even Apple’s original SSD – with a fast new SSD and run OS X 10.6.

Closed Lid Mode: All Intel ‘Books support “lid closed” (or clamshell) mode, which leaves the built-in display off and dedicates all video RAM to an external display. To used closed lid mode, your ‘Book must be plugged into the AC adapter and connected to an external display and a USB or Bluetooth mouse and keyboard (you might also want to consider external speakers). Power up your ‘Book until the desktop appears on the external display and then close the lid. Your ‘Book will go to sleep, but you can wake it by moving the mouse or using the keyboard. The built-in display will remain off, and the external monitor will become your only display. Since all video RAM is now dedicated to the external monitor, you may have more colors available at higher resolutions. The MacBook Air is designed to run safely in closed lid mode, but if yours runs hot (perhaps due to overclocking or high ambient temperatures), you may want to open the lid when in closed lid mode: The screen will remain off and the computer will more readily vent heat from the CPU.