On one fateful December day in 2007, my original 300 MHz Clamshell iBook suddenly stopped running on battery power. For four years, I spent hundreds of dollars on my iBook, replacing several internal components, including the logic board and the charger board. Why I didn’t think to replace the battery is beyond me, but I eventually gave up.

Today, I completed a journey that took me places I never thought I’d go: Moments after installing a $40 battery in the iBook, I disconnected the AC, opened the lid, and pressed the power button.

I’ll warn you now that this isn’t going to be the last episode of my iBook adventure. I’ve decided to make Part 3 a little inspirational piece and save the meat of my testing for Part 4, which I’ll finish once I’ve gotten everything set up. Even so, keep reading, because there’s one big juicy surprise in store.

After charging for an hour or so, my iBook’s new battery was full. Unplugging it from the Pismo’s yo-yo AC adapter, I proceeded to close the lid and lift up the handle. A strange sensation came over me – a mix of nostalgia, relief, euphoria, and facepalming. This whole time, the issue had been as simple as replacing a $40 battery. And yet, if I had only replaced the battery back in 2007, you probably wouldn’t be reading this article right now.

The day I bought my iBook was an ordinary Iowa summer day. I’d saved up $120 from my paper route (which paid $20 or so a month) to buy a Mac laptop, and my laptop of choice was an iBook. It didn’t matter which color, so long as it was one of these beautiful and mysterious machines.

Nestled in a crowd of (probably) school surplus tangerine iBooks was my iBook, running at roughly $90 plus $30 shipping and handling. It was running Mac OS 9, had no wireless, but did have a good battery and yo-yo adapter. I tried bidding on the first from a column of identical iBooks, but I was outbid at the last moment. The second time I tried, I succeeded! I remember lifting my hands to heaven, thanking God for giving me a laptop to replace my PowerBook Duo, which I would end up fixing later on (see Resurrecting Apple’s PowerBook Duo), only to have it die shortly afterward.

The day my tangerine iBook arrived, I excitedly tore open the packaging, finding a larger laptop than I’d expected squeezed diagonally in the box. I pulled it out, plugged it in, and proceeded to marvel at the colorful beauty of Mac OS 9.2.2. 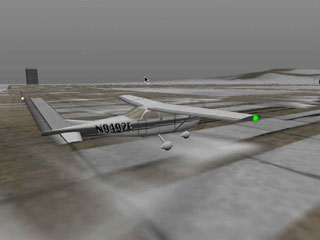 As it turned out, there wasn’t much else I could do with it. I tried writing reports for school, but SimpleText can only go so far. It ended up being quite good at playing X-Plane 5, one of my favorite old flight sims, but with 4 MB of VRAM, it wasn’t exactly a powerhouse.

That summer, we stayed at a cabin in Backbone State Park for vacation, but the iBook was left behind with a dead yo-yo. We returned halfway through our vacation to run our weekly paper route, and then I was able to bring my iBook back to the cabin to play X-Plane during the torrential thunderstorms that plagued our stay.

When school started back up, I found I could watch some video lectures on it, which made me independent of our two hopelessly bloated PC desktops – a Compaq Presario from 1999 running Windows 98SE and our inherited Pentium III custom whitebox running Windows ME. My siblings, though, were stuck with the two desktops and were somewhat jealous of my tangerine wonder.

In December, my iBook’s battery decided to fail catastrophically, leaving me without a mobile laptop again. Throughout the next four years, the iBook would change hands amongst my siblings, until finally, in spring 2011, it found itself back in my hands.

I tried fixing the iBook for months afterward, replacing its logic board and charger board (and in the process gaining my first experience inside a Mac), but nothing worked. Eventually, I gave up and bought my Pismo. My Pismo, in turn, led me to Low End Mac. My first time on the site was reading Charles W Moore’s Compleat Guide to the Pismo PowerBook, and I’ve been coming back ever since.

I got involved in the groups (“Hi all” to my fellow G-Books members), and it was on the G-Books group that I boldly announced that only the “iSlate” would replace my Pismo – just months before Steve Jobs pulled the first iPad out from under its cover on January 27, 2010. On G-Books, I tried to post the review of my iPad I promised to write, only to have Beverly, the moderator, suggest that I send my review to Dan Knight, which I humbly did. My second story, Resurrecting Apple’s PowerBook Duo, earned me my Apple Everywhere column (prospective names for which were Leeding the Way, a pun on my last name, and Midwest Mac, which might have been a little confusing to overseas readers).

I hate to get all Because of Winn-Dixie on you, but I think I’m not exaggerating to say that my iBook has changed my life for the better. I’d never intended to be a computer fix-it person, but the hell I went through to tear this iBook apart the first few times hardened my constitution and gave me the confidence to tear apart any computer, as well as the knowledge to put it back together again.

Where I Did Not Intend to Go

A simple epitaph on my uncle’s headstone reads, “A sign of God is that we will be led where we did not intend to go.” In his case, he survived four years of cancer when the doctors said he only had a few weeks. In my case, God must have been pleased with my giving him the glory for my iBook and decided to use it to steer my life in the direction he wanted it to go.

I wanted to be a novelist, but I think I’m now better off as a computer tech – rather than touch people’s lives through dead ink on dead pages, I get to touch them by helping people use computers. I wanted to stay away from people, so God used a simple battery failure to tell me I needed to get among His people and work for His glory.

I know you’ve all been waiting for this, so here it is. I had an inkling that replacing my hard drive with a Compact Flash card (see Part 2) would increase my battery life, but I didn’t know by how much. You can imagine my surprise when my full battery read well above 9 hours of use remaining. (When new, this iBook was rated at 6 hours on battery.)

The meter turned out to be pretty accurate – after using my iBook for six hours, I’ve got over three hours left! My iBook is now capable of running right alongside my iPad throughout the day, which makes it ten times more useful than it was back in 2007.

It’s funny: This year, we decided to go back to Backbone, and the rain stayed away for most of our week there. Coincidentally, the iBook is running better now than it ever had before.

Next time, I’ll be talking about running OS X 10.3 Panther on the iBook, along with a bunch of applications.