I have just become the proud owner of an iPhone 3G, an utterly brilliant device. However, I own a 500 MHz G4 Titanium PowerBook, and an iPhone requires USB 2.0. Can I get round this?

The Titanium range and the G3 range before it (well, the Lombard and Pismo) came with built-in USB 1.1. According to Apple, you must have a USB 2.0 port for an iPhone, but using the standard iPhone/iPod cable I can confirm that my iPhone syncs flawlessly over USB 1.1 – albeit very slowly. For charging as well as syncing contacts and calendar events, USB 1.1 is perfectly suitable, as it only take a few minutes.

However, it is when it comes to syncing music that USB 1.1 falls flat on its face. My iPhone 3G is an 8 GB model, and trying to sync 7 GB of music, data, contacts, and calendar events over USB 1.1 would take around 6 hours. Okay, this is better than nothing when you have no choice, but I was on the hunt for a better option. For people with 16 GB or 32 GB iPhones, it could take days to sync over USB 1.1.

I have a USB 2.0 PC Card for my TiBook, which works great for low-powered devices and gives much better speed that the built in USB 1.1 ports. It is an essential piece of kit in my low-end laptop bag.

I connected the iPhone to the USB 2.0 port using the iPhone/iPod cable, and my iPhone ‘bleeped’ to say it was connected, but within a few seconds it disconnected itself. Whatever I did, I couldn’t get it to stay connected.

None of the above resolved it.

I recently reported about using my USB 2.0 PC Card for high powered devices, like my external hard drive, which has no external power supply (see Powering a USB 2.0 Drive on a USB 1.1 PowerBook). This required a workaround using one built-in USB 1.1 port, one of the USB 2.0 ports, and a USB Y-cable.

I thought about following a similar idea. The problem occurs because the USB 2.0 ports on the PC Card do not offer the full power that a built-in USB 2.0 port would offer, so a high powered device that is supposed to be powered by the USB bus cannot function properly. Sometimes you will get a warning saying “this device draws to much current from your USB port and has been shut off to prevent damage”, but sometimes you don’t.

Different cards and different machines act differently. You might find some Macs and iPhones work together fine using a USB 2.0 PC Card and do not require the extra cabling. Mine doesn’t, and from what I have read, TiBooks don’t.

My external hard drive has a normal USB jack on it, so it can take a Y-cable. The iPhone uses it own special cable with the dock connector on the bottom, so a little modding or gender changing is required. So I popped off to eBay to find a USB A female-to-female gender converter, which are very cheap. Just as I expected, it worked perfectly and has been working perfectly all day today.

For this trick to work – to get an iPhone or iPod working at USB 2.0 speeds on any PowerBook with a PC Card slot – you will need the following: 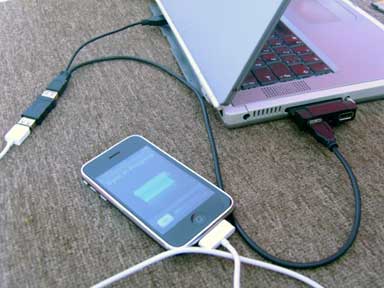 It sounds complicated and a bit of a hack, but it really is simple.

Next, plug the iPhone cable into the bottom of the iPhone and wait. The iPhone should ‘bleep’, start charging, and open iTunes.

Go to the System Profiler and have a look under the USB section. If it says the iPhone is connected via USB 1.1 – which will show up as a device under USB Bus – all you need to do is switch the twin ends of the Y-cable around. Put the end that is in the USB 1.1 port into the USB 2.0 port and vice-versa. Refresh System Profiler and see if it shows the iPhone under the USB 2.0 High-Speed section.

This is a fantastic workaround for anyone who has an older PowerBook and would like faster sync speeds for their iPhone or iPod. Unfortunately, this will not work for iBook G3 owners, as they have no PC Card slots.

One of the biggest drawbacks of the PowerBook G3 and Titanium PowerBook G4 range is the lack of USB 2.0, but with this workaround, the Y-cable and a gender changer should not only resolve iPhone and iPod issues but work with other devices too.