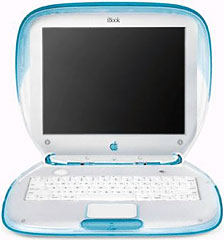 On May 1, 2001, Apple toned down its consumer portable range from the marvelous colourful and oversized Clamshell iBook to the sleek white “IceBook” (more officially called the “Dual USB iBook”).

In 2009, I took a break from the Mac world, sold my Titanium PowerBook G4, and moved to Linux. Shortly after coming to my senses, I grabbed whatever Mac I was able to get my hands on quickly, and it happened to be a 500 MHz G3 iBook in great working order. This was the first one I owned, but my wife had owned an 800 MHz model a few years previous, and I had worked on many 500 and 600 MHz models in the past.

The last Clamshell iBook was introduced in September 2000, and when the white iBook was released in May 2001, it wasn’t a huge increase in specifications. 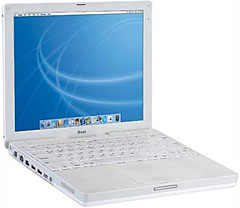 Most other things stayed the same. Both feature a 66 MHz system bus, one RAM slot, an 8 MB ATI Rage Mobility 128 graphics chip, and shipped with a 10 GB hard drive. The base RAM and maximum RAM stayed the same.

Expansion slots were mainly the same, with the addition of a second USB port, a built-in mic, and a Kensington lock slot on the white iBook.

These minor upgrades and the inclusion of the higher resolution screen made a lot of difference. Rather than looking like a portable toilet seat, the white iBook looked sleek, sophisticated, and professional.

These were brilliant little machines. Coming from PowerBooks prior to this, the one thing that annoyed me was its limited upgrade ability. All laptops are pretty limited, but fitting a new hard drive in a PowerBook could be done within minutes. However, the iBook range was not so easy. 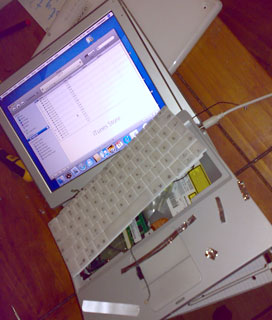 Over the years I have become very competent at upgrading and repairing these iBooks – they have become my speciality. Replacing a hard drive is no mean feat in these, require a strip down. Further repairs/replacing took even further work. I had to replace a screen on one once, and this required a complete dismantling.

As great as these little white gems were, they were plagued with graphics chip and screen cable problems. The graphics chip would become so hot that the solder would melt and loosen the connection, causing serious problems. Temporary resolves were to put a metal shim between the bottom casing and the chip to keep pressure on the logic board keeping the GPU tight, but this didn’t last long. Some even clamped it together with a G-clamp to maintain pressure.

Some more extreme attempts were to melt a tea-light candle over the chip (this was done by Geek Technique) – see http://www.youtube.com/watch?v=u68G-gCkswk

Secondly, the video cable from the screen to the logic board passed through the screen clutch over the hinge. Over time, the constant opening and closing wore away at the cable, causing the screen to become intermittent, generally when the screen was opened all the way.

This was not restricted to the 500 MHz models. All white iBooks – and even some of the G4 iBooks – suffered the same problems, making these machines among the most plagued and unreliable of Apple machines.