Since the dawn of Mac OS X, there have been major and minor versions.

There are Mac OS X versions that introduced major new features and those that focus mainly on speed improvements and streamlining. I first wrote this article in 2012, taking it up to Mountain Lion. Now in 2015 I revisit the idea. Has Apple changed its policy in the following few years?

Mac OS X Public Beta ‘Kodiak’ was our first taste of the future. Apple had for a long time wanted a next generation operating system. Classic Mac OS was getting old and behind the times, and in 2000 Apple released the Public Beta to Mac OS X.

This new system was built around the NeXT operating system it had bought from Steve Jobs a few years earlier and had a Unix/BSD base. 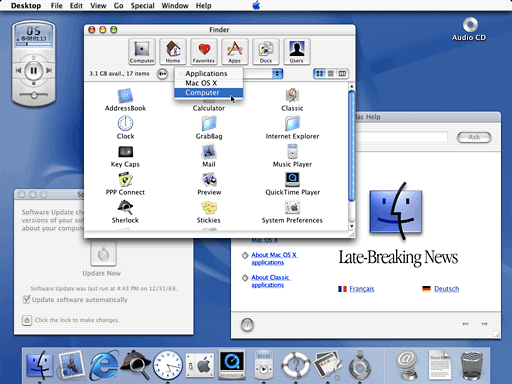 It showed off a whole new look including the dock and the Aqua interface – and set Apple on a long road of revisions. It was a major leap over Mac OS9.

For the pure reason that it is the first we saw of Mac OSX, we can state that the Public Beta was a major version.

Mac OS X 10.0 Cheetah was a minor revision, over the Public Beta. The early years of OS X were a rough ride for those following it – although many stayed with the stability of Mac OS9, until Mac OSX 10.2 ‘Jaguar’.

How Apple managed to release OS X Cheetah and Puma in the state they did I do not know. They even managed to charge $129 for Cheetah. 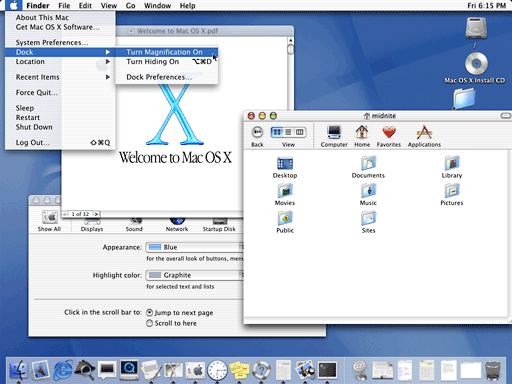 We Mac users ridicule Windows as being an unfinished, bug-ridden operating systems, and then Apple went from the rock solid beast that was Mac OS 8 and 9 (rock solid without third-party additions, which could make things unstable) to the early versions of OS X that could barely last a few hours without crashing.

OS X 10.1 Puma with its customisable interface, better networking and the addition of hundreds of third party drivers made it the first useable version of OS X. This was reflected in the fact that it was offered as a free upgrade from Cheetah. We tend to disregard the Public Beta and Cheetah as proper versions of OS X – and quite rightly so. Puma was the first ‘real’ major version because of the significant improvements it brought with it. 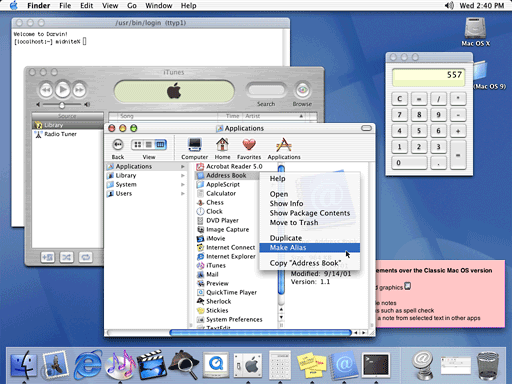 Mac OS X 10.2 Jaguar was a minor revision. It brought speed improvements and added stability over Puma as well as adding minor new features such as Quartz Extreme, an updated Mail, iChat, Bluetooth, and Rendevous (later renamed Bonjour). Because of the speed and stability it brought a lot of people consider this the first usable version of OS X. It was the first version I ran as my main OS since OS 9. 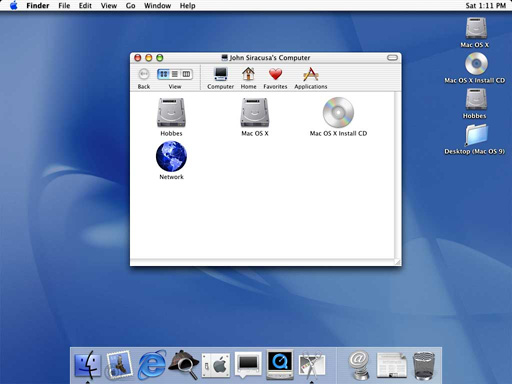 Mac OS X 10.3 Panther was a major revision. Not only did it clean up the whole OS, it brought AES encryption, improved Finder, Font Book, and Xcode, and it introduced Fast User Switching (which also brought the 3D cube animation for switching users). It was further improved over Jaguar. While Jaguar was good, Apple still had a long way to go to refine OS X, and Panther was another step forward. 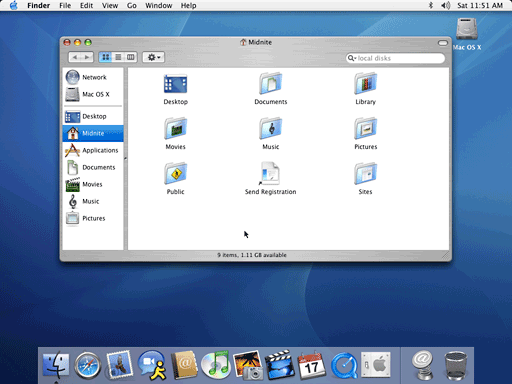 Mac OS X 10.4 Tiger which is the most respected PowerPC version of OS X, was really a minor revision. The speed optimisation over Panther was amazing. I always found Panther (while better than previous versions) clunky and slow. Tiger, on the other hand, ran much better even on unsupported hardware. It brought a more unified look through out the whole OS, as well as Spotlight, improved 64-bit addressing, and a new version of Safari. 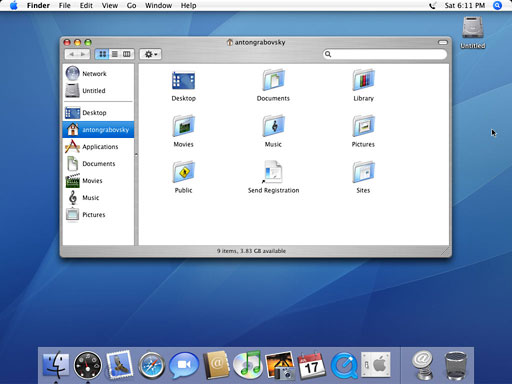 Tiger is the longest serving version of OS X to date, giving testimony to how great it was. It ran on a 300 MHz G3 from 1998 all the way up to Core Duo Intel Macs from 2006. Now that’s impressive.

While a minor version, the streamlining and optimisation was amazing.

Mac OS X 10.5 Leopard was a long time coming and a much needed update. It was the first version of OS X to seriously increase the system requirements, dropping the whole G3 range and early, slower G4s too, a mass culling culture that Apple would continue in future versions. This was mainly due to its heavy reliance on the graphics chip to perform fancy new effects. According to Apple, it contained over 300 new features and changes, including redesigned Dock and Finder, Cover Flow, Time Machine, Front Row, and Photo Booth. 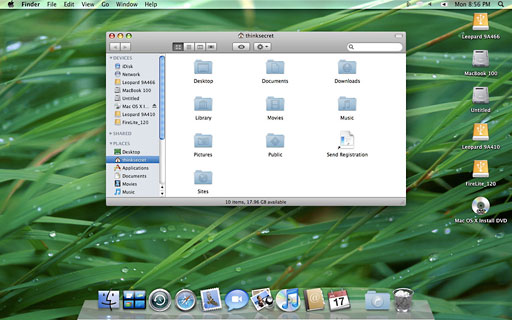 Mac OS X 10.6 Snow Leopard was a minor revision, although this could be argued. It was a huge streamlining of Leopard and the first version of OS X to only run on Intel hardware. It was the first release that was primarily targeted by Apple for its speed improvements and having a smaller footprint rather than lots of new features. But the smaller footprint could primarily be put down to losing the PowerPC code.

Apple certainly pulled it off. Snow Leopard was a lot faster than Leopard on the same hardware and one of the most stable versions of the OS ever to be released. 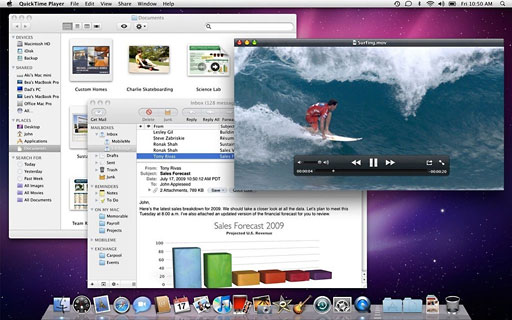 OS X 10.6 Snow Leopard is Intel only – and the last to run PowerPC software.

Snow Leopard has been heralded as one of the best version releases ever by Apple – even in 2015 there are a lot of people still running it because of its extreme speed, stability and compatibility with PowerPC software.

Mac OS X 10.7 Lion was a major release. It was the third time that Apple dropped large amounts of older hardware from its supported list. Where Snow Leopard dropped all PowerPC Macs, Lion dropped all 32-bit Macs, only running on Core 2 Duo Macs.

While not adding lots of new features like other major versions, it altered the path of OS X. It saw Apple bring OS X more in line with iOS, such as LaunchPad and resuming apps from their previous state. It also cut out any support for PowerPC apps, which was handled using the Rosetta emulation engine in Tiger, Leopard, and Snow Leopard on Intel. 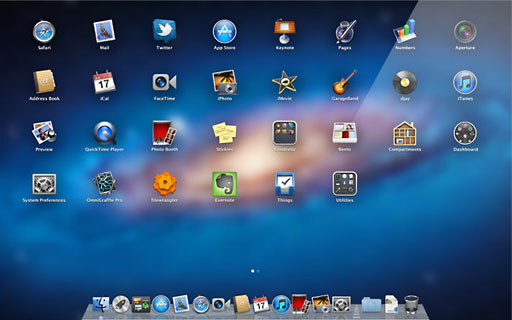 When Apple were testing Messages it was initially released as a beta for Lion, although the final release was made for Mountain Lion upwards.

OS X 10.8 Mountain Lion was a minor revision. Where Lion had taken leaps in terms of new features including iOS integration – Mountain Lion brought with it a serious improvement in speed. Lion was a huge resource hog, however Mountain Lion smoothed out the edges – running much better than Lion did.

Mountain Lion ran on practically the same hardware but it does require a fully 64-bit capable machine. Some Core 2 Duo Macs while being 64-bit capable are hindered by having only a 32-bit EFI meaning they can’t boot to a full native 64-bit kernel and this stops them running Mountain Lion.

New iOS-inspired features include Messages (compatible with the iOS version), Notification Center, and Reminders were added to Mountain Lion. 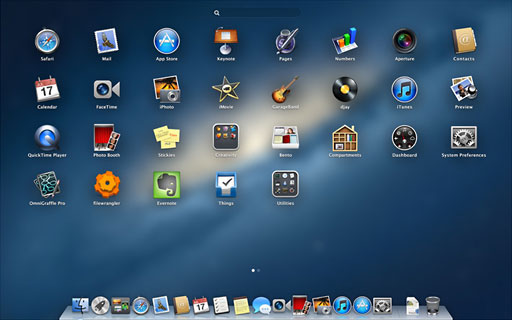 Mountain Lion also required a fairly top-end graphics chip, cutting out some of those Macs with early integrated chips like the Intel GMA 950 and X3100, ensuring users gets a premium experience rather than a sluggish “minimum requirements” experience like Microsoft.

It was also the first version to quietly drop the term Mac OSX term and simply naming it OSX in the ‘About The Mac’ screen.

OS X 10.9 Mavericks stopped the big cat naming scheme, switching to California locations. Is Mavericks a major revision? It could be disputed that with Apple switching to a free yearly update system could any future version be called major?

The shift in naming scheme alone could class it as a major revision, but it also came with new Maps and iBook applications, refinements to existing apps and removing some of the skeuomorphic aspects of the UI. It also brought with it speed improvements. Mavericks was the first version to be offered for free (besides 10.0 Cheetah) – available to anyone running Snow Leopard as it was downloadable via the Mac App Store, which was introduced in the 10.6.6 update. It was a clever move from Apple in a attempt to get all those that can run Mavericks to do so and it worked.

OS X 10.10 Yosemite was a major version and a much anticipated release. With Apples redesign of iOS7, it was expected that Yosemite would also have a major redesign – and the rumours were correct featuring a 2D dock, new system font and a whole new look.

The new look wasn’t accepted by all, with many claiming it looked ‘childish’ with its flamboyant icons and bright new look. With Yosemite came Continuity making it easier to move from Mac to iOS easier and visa-versa, iPhoto was replaced by Photos, Spotlight was redesigned, and the search engines were switched to DuckDuckGo.

It was also the first time the public betas were offered since the first release of OS X in 2000.

OS X 10.11 El Capitan is a minor version. It looks very similar to Yosemite, with a shift to yet another system font, San Francsisco,  bringing it in line with iOS 9.

El Capitan is dubbed ‘the next Snow Leopard’ with its focus mainly on security and speed. App loading times are increased and new programming API Metal is introduced. El Capitan has only been out a short time, but generally feedback is it is lighter than Yosemite and its lack of new features put it firmly in the minor revision list.

Who knows what the future brings for OS X. Integration with iOS seems high on Apple’s mind, and both are looking similar these days – although the still remain adamant they will keep them separate products.

Rumours are flowing that the next version of OS X could see a major hike in system requirements – which it hasn’t done for a few years – hence the decision to make El Capitan a stable and fast release, as it could leave a lot of Macs behind.