I am not as low-end as I used to be, and it has been a long time since I had any major dealings with Mac OS 9 and the computers of that era. However, a friend still runs 20-year-old machines for connecting to older serial and SCSI peripherals on an almost daily basis.

Keeping these machines running is no easy task at times, and not many people still have knowledge of such an age – so I am on hand for support when something goes wrong. I have been on the end of the phone numerous times, but this week I got to meet them face-to-face. 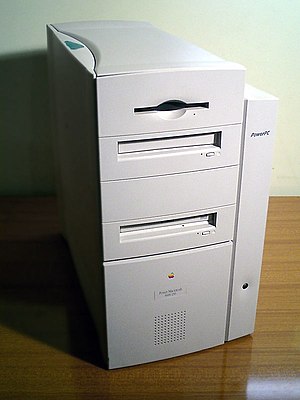 This Power Mac 8600 is perhaps the oldest machine I have worked on for a while. Released in 1997, this is now a 21-year-old computer. It was one of the last Macs before the move to the G3 chipset – and a G3 upgrade was possible. This huge beige box has an interesting layout inside. The side pulls off and half of the inside is lifted up via a large translucent green handle to gain full access to the logic board.

All internal drives are SCSI drives, which caused us some headache. The main hard drive has some major directory/structure issues repairable only by DiskWarrior. However, it will only repair if not being used as a startup drive. Finding a compatible version of DiskWarrior that is bootable was a challenge, and getting the 8600 to boot to it was even more challenging – something we didn’t succeed in. My second option was to remove the drive and place it in another machine as a slave and repair it that way, but being SCSI it was not compatible with anything else we had.

Another stumbling block was that this machine is an ‘Old World ROM’ Mac, meaning for one that it doesn’t use the standard boot keyboard shortcuts

The addition of a third party USB/FireWire card should have made file transfers between machines a lot easier. It is the only ‘modern’ method on this machine. However, copying just about anything to a USB stick would cause the machine to lock up. The internal Iomega Zip drive would have been a saviour if we had a USB Zip drive for the newer computers, but unfortunately not. [Publisher’s note: Mac OS 9 only supports USB 1.1, so file transfer would have been very slow.]

The other machine is a Power Mac G4 tower, which in comparison to the 8600 is far more powerful. This machine works fine, however, the third party Adaptec 2906 SCSI PCI card just wouldn’t work, despite it having what appeared to be the correct extensions installed.

The System Profiler wouldn’t even detect a card in Slot B. However, after removing it and placing it in Slot D, the machine saw it, but still, the SCSI scanner wouldn’t work, complaining of a driver or SCSI ID issue.

Finding drivers and old software of this age is not too difficult. There are a lot of sites offering plenty of vintage files – even commercial items classed as ‘abandonware’.

We found some different Adaptec drivers and also a copy of Silverlining, which was used to control external SCSI devices. Putting these in seems to have done the trick. The giant A2 SCSI scanner is now working on the G4.

The G4 is now capable of doing what the 8600 was doing – and a considerably lot faster. It’s a strange world where a G4 is classed as modern and looked on as the better alternative.

At least with built-in USB and FireWire ports and more standard internal drives, it puts it closer to newer machines and easier to work on.

Delving into Mac OS 9 brought back many memories. I still regard OS 9 as one of the greatest achievements in Apple operating systems. It was a superb OS and one I used in a professional publishers for years before being dragged into the OS X world. Early OS X was awful, incomplete, and bug-ridden, and while Mac OS9 wasn’t without its faults, it was solid.

Its biggest downfall was when stable it was amazing, but if an application went wrong or crashed, it would take the whole system down. This would require a reboot and resulted in a loss of whatever you had open.

I always liked the look of the OS. For its time it was aesthetically pleasing and even now – 17 years after its launch in 1999 – it still looks a great OS. Mac OS 9 was the first Mac system I had the full experience of, having only briefly used System 7 and Mac OS 8 previously.

Mac OS 9 was simple and sleek and ran very well on contemporary hardware, unlike OS X, which ballooned and has bloated with each subsequent release.

The computing world these days offers fairly universal standards. The introduction of USB made a huge leap in cutting down the number of ports and connections available. That wasn’t the case 20 years ago. Apple had its own collection of peripheral and monitor connections, and even the likes of Sony used proprietary ports. Mobile phone manufacturers all used their own charging and audio ports.

The main reason for these computers still being used 20 years on is the selection of high-quality scanners and printers that won’t work on modern machines due to old connection types being used.

The 8600 is still in need of repair, but the G4 is doing an amazing job as its replacement. There are many who would throw these machines in the trash, but if a piece of technology serves a purpose for you – however old it is – then it is still useful and worth keeping running.

I enjoyed my day and my trip down memory lane, but in an age where computing and standards have moved on, it can be tricky to find compatible hardware, software, and drivers to keep these ‘low-end Macs’ alive and to get these files on these machines.

Hats off to my friend for being the last person I know to use pre-G3 machines. Hopefully, his ‘upgrade’ to a G4 will see him for many more years yet.