Using your TV as a display for your Mac (or any computer really) has taken a lot of twists and turns over the years.  Each era as display technology has evolved has seen significant progression, but not until recently has TV technology had the right mix of features, functionality, and price to truly be ideal to double as a display for your Mac and other computing devices.

Before we dig into modern setups, let’s step back a minute to actually appreciate how far we’ve come over the last 40 years or so when it comes to display technology (at least the consumer grade stuff)..

At one point, the prospect of using a television as a computing display (compared to a purpose built computer monitor) was potentially a cumbersome process.  TVs (well at least anything of considerable size and quality) were traditionally an expensive centerpiece of your living room and just didn’t make sense to connect a computer to in most cases, since they were designed with video in mind and not displaying sharper computer graphics and test.  There were some occasional exceptions to this.  Many early Apple computers and early Macs could output a monochrome or basic 16 (and sometimes 256) color video signal using the NTSC standard at 60Hz (common in much of Asia and North America) or the European PAL standard at 50Hz at 240p/480i.  This was good enough for most use cases and smaller TVs with a Composite Video input were common enough and would tend to work out fine for the lower res video output of most computers of this day, but things changed quickly… 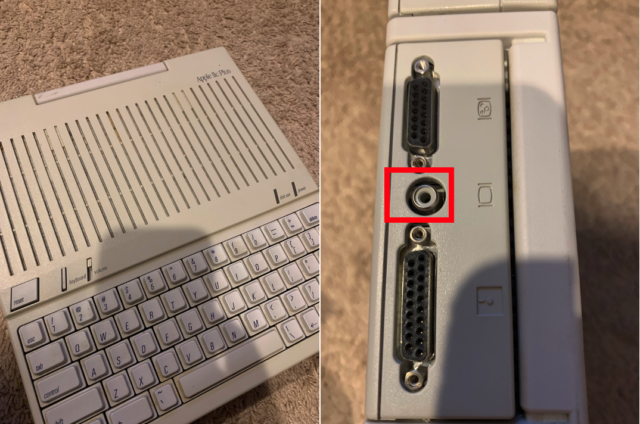 Here’s an Apple IIc+ introduced in 1984.  It worked fine in its day with just a simple Composite Video output.

TVs for the longest time were simply meant for well.. watching TV/Movies or playing video games.  As computers quickly evolved though, consumer TVs didn’t evolve quite as much throughout the 90s technically speaking (CRT multi-sync monitors were an entirely different story).  For the consumer TV, we were still using Standard Definition CRTs for the most part with the same 240p/480i display capability at up to 60Hz.  Color was much more vivid, picture was much sharper thanks to increased TVL (horizontal TV line count) and video input quality was greatly improved with S-Video and RGB PbPrY Component video inputs being introduced during this time.  Unfortunately, despite the picture quality advances, computing on consumer TVs became far less ideal as the resolution of computer graphics became more common at 800×600, 1024×768 and even up to 1600×1200 with millions of colors at 60Hz or greater (high refresh rates on slightly lower resolutions such at 1024×768 at 120Hz became a thing on CRT computer monitors as first person shooters gained ground).

There were a few rare exceptions such as “prosumer” presentation monitors that could be a competent monitor while also being a great TV (see my article on the RCA MM36100), but no consumer CRT TV that I am aware of had the circuitry to push refresh rates over 60Hz, so the 90s made for an odd era where if you wanted to watch TV and then say – do some heavy gaming at high refresh rates.  During that era, a better option simply might have been to use a dedicated TV tuner (many analog tuners made in the 90s that worked on Windows based PCs and Macs) with your computer and its monitor/speakers.  A video capture card was always an option too. 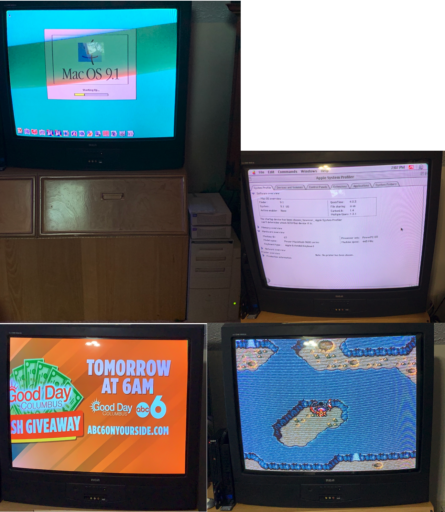 The RCA MM36100 was introduced in 1999 as one of the very first HD capable TVs, but was truly an all analog presentation monitor.  As shown, you can still watch HDTV broadcast TV on it today with an external ATSC 1.0 tuner.  You can also fire up an old Mac with it at VGA or SVGA resolutions (Power Mac 9600 shown) or play a 240p game console at 15Khz Horizontal Sync (SNES shown connected with HD Retrovision Component Video cables and Final Fantasy II – aka Final Fantasy IV).  It was one of the first TVs to truly do it all and handle both normal TV viewing, gaming and computing (but is still limited to no more than 60Hz refresh rates).

Everything as always has a natural progression/evolution and as the world moved past CRT and standard definition, we saw some drastic improvements in the 2000s.  On our way as things moved ahead, the advent of various digital HDTV technologies ran their course.  DLP HDTVs, Plasma Displays and early LCD TVs ushered in new ways to be used as a larger computer monitor.  These choices were not always ideal though.  DLP TVs didn’t come in small sizes and were unwieldy as a monitor with wide cabinet depth (think the size of most rear projection CRTs).  Plasma TVs on the other hand produced incredible pictures and could side on a desk, but were an extremely expensive option at this time (when they first arrived you were looking at $3000 to $5000+ for most 37-42″ sets and premium 50″ sets were $10k+)! As with early OLED TVs, you also run a significant risk of image burn-in with plasma displays if you have fixed objects like desktop icons and menus present for extended periods (even with pixel shifting options).

While early LCD TVs were not ideal either (poor motion resolution and dim CFL backlighting), things quickly changed and before you knew it we had 1920x1080p LED backlit LCDs available for very reasonable prices, so by the end of this era you could indeed get exactly what you needed on a basic level – good quality computing display and TV all in one device! 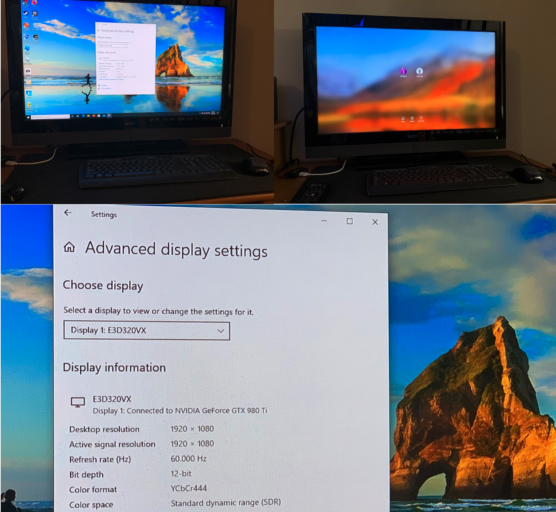 A 32″ LCD TV is a size that sits perfectly on most desks and gets the job done.  You won’t get more than 60Hz in most cases, but for average computing use, this is fine and some panels like the E3D320VX pictured will provide excellent color reproduction (12-bit pixel depth Standard Dynamic Range 4:4:4 color displayed from my Mac Pro 5,1 running GTX 980Ti with Windows 10 build 2004 and MacOS High Sierra).

CRT HDTV and EDTV (Enhanced Definition TV) also arrived during this era and were rather short-lived.  These sets were sold primarily from around 2001 – 2006 and while many offered digital DVI (and later HDMI) inputs, these sets sadly were not designed to be multi-sync like a typical computer monitor (major missed opportunity by the industry) and were poor at displaying computer text generally so while it can be done to a degree with proper signal conversion/scaling or using a resolution that matches up well with the given CRT HDTV/EDTV, an LCD is simply superior for being used as a dual purpose TV/computer monitor vs any CRT HDTV/EDTV.  On the other hand, during this era (while not TVs), may purpose built PC CRT monitors, Professional Video Monitors (or PVMs) and Broadcast Video Monitors (or BVMs) were sold that are far superior to many LCDs, but can cost $1000s today due to a rabid collector’s market.

Fast Forward to Today… Plus, What’s the Best TV I Can Hook up to My Mac Right Now?

That brings us to today..

There are now a crazy number of choices out there when it comes to selecting the right TV to pair with your somewhat modern to fully modern Mac (specifically if you’re looking for something brand new rather than a used display).  As you might expect – price, size, picture quality, key features (including input selection, HDMI/HDCP version, HDR capabilities, brightness, black performance, color, refresh rate, burn-in risk and resolution) may all factor into this decision when it comes to the “dual purpose” nature use of a display for computing activity and other daily usage (such as movie/TV watching).  Many of the features may not matter specifically to MacOS itself (barring maybe refresh rate and HDR performance), but they could factor into your overall decision.  Check out the site rtings.com for almost any recent model TV you can think of since the mid 2010s for specifications and detailed reviews.  I’d also recommend watching Vincent Teoh’s HDTVTest channel on YouTube to keep up on the latest display trends to see what might work for your needs in terms of integrating a TV with your Mac setup!

I went with the TCL 55R635 (55″) personally for my latest setup with my main production machine (a 12-core Mac Pro 5,1 running Vega 56).  The Vega 56 provides Freesync capabilities, very good to excellent 1440p 120Hz performance and works with MacOS High Sierra and later, so the TCL 635 was an excellent match for many reasons.  The TCL 635 provides both 1080p and 1440p 120Hz display capabilities, Freesync/G-Sync and generic VRR (Variable Refresh Rate), Dolby Vision/HDR10/HLG for HDR formats, ALLM (Auto Low Latency Mode), offers eARC audio passthrough for Dolby Atmos and has excellent brightness and performance.  Using MacOS and Windows 10 at 1440p 120Hz is an outstanding experience with this display! In late builds of Catalina (I believe 10.15.4 and later) and Big Sur you also gain HDR for MacOS, but it would appear that HDR is not activated in “low resolution mode” if you want 120Hz, so you have to pick and choose the experience with this display in MacOS (perhaps this is just typical behavior though). 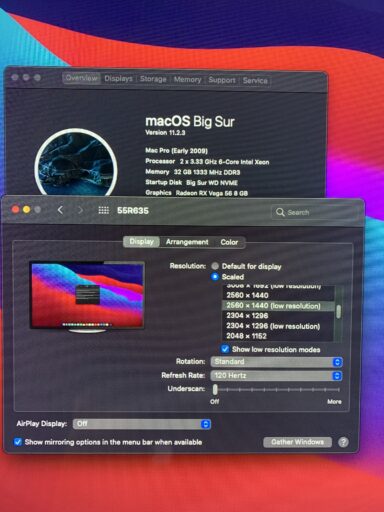 TVs are just generally cheaper for the size you get compared to purpose built monitors – especially 55″ displays.  This is due to the manufacturing process with how LCD displays are built and how the LCD panel sheets are cut at factories (55″ is the most cost effective so it tends to be the best price – see LG CX 48″ vs LG CX 55″ prices to see what I mean plus this video from HDTVTest).  I paid $699 for the TCL 635 when it was on sale last month.  I challenge you to find more bang for the buck!

Another reason is device repurposing.  It’s really easy to repurpose a 55″ 4K TV.  Put it in another room and/or sell off your least capable (not necessarily oldest) display you no longer want and upgrade what you moved out as the tech advances.

In conclusion, things have only gotten better and better in recent years and will only continue to improve.  Perhaps smaller TVs will gain more of the advanced capabilities larger units have today if the manufacturing processes improve and eventually we see a sort of convergence of the traditional TV and monitor.  I’d really love to have HDMI 2.1 or better and DisplayPort 2.0 or better (when it arrives) on a future TV in the 40-50″ class and have it be under $700 one day.  Right now that’s a pipe dream.  You’ll spend a boatload for a PC monitor like that (43″ ASUS ROG Strix XG43UQ is arriving soon with HDMI 2.1 and DisplayPort 1.4 for around $2000).  Until these kinds of monitors come down in price, TVs like the TCL 635 for now will be a much better value!