The biggest news of Macworld week for Apple portable fans didn’t come from the keynote, in which there were no laptop hardware announcements at all, but rather from Sonnet and Newer Technology, both of which released 500 MHz G4 processor upgrades for WallStreet G3 Series PowerBooks from the former and a WallStreet/Lombard G4 upgrade from the latter, joining the existing G4 WallStreet/Lombard upgrade solution from PowerLogix.

The Crescendo/WS G4 500 is the latest addition to Sonnet’s line of Crescendo/WS processor upgrades for PowerBook G3 Series WallStreet computers. This upgrade offers a Motorola G4 processor running at 500 MHz, with 1 MB Level 2 backside cache, which more than doubles the performance of a stock 233 MHz machine. The Crescendo/WS G4 500 also corrects a Mac OS “sleep mode” issue that can prevent these machines from waking up from sleep mode under OS 9 and earlier operating systems – the only G4 upgrade that fully supports sleep mode under Mac OS 9.x and earlier

The Crescendo/WS is compatible with the PowerBook’s existing hardware, software, peripherals, and RAM. This product supports a total RAM capacity of 512 MB and accommodates SO-DIMMs from 32 MB to 256 MB. It supports Mac OS 8.1 and higher, including the latest innovations of OS X without any additional software or plug-ins.

For owners of the early “MainStreet” 233 MHz PowerBook G3 Series units with no Level 2 cache, Newer can also add the G4 card and 1 MB of Level 2 cache running at 250 MHz(at extra cost). That will be quite a dramatic performance boost for MainStreet owners.

As with Newer’s Pismo PowerBook G4 upgrade, the NUpowr G4 for the WallStreet and Lombard computers requires the customer to ship the computer to Newer Technology to perform the upgrade on the stock CPU card. Newer then removes the processor daughter card card, solders in the G4 processor and reinstalls the card in the PowerBook for testing and shipment back to the customer.

Mac OS X is supported, and the upgrade product is covered by a two year warranty.

NUpowr upgrades are available exclusively at Other World Computing.

Get the original while you can! Wegener Media just acquired a bunch of Apple Newton eMate 300s atauction and is selling them for $199 each.

The price includes the machine, stylus, the battery, and a power pack. The software is installed, and is available elsewhere for download.

These have the standard PC Card slot, etc. – a very cool web/email/communications tool – at a dirt-cheap price.

Units are guaranteed working for 30 days. Batteries are new, but Wegener can’t guarantee the longevity.

The Smart Drive user interface incorporates a 2-line by 20 character LCD and a 2-button keypad. By default the user interface shows the enclosure’s real-time status or performance. Using the keypad, users navigate menus offering information on the FireWire-IDE bridge, the hard disk, the FireWire connection, and the host computer. Additional diagnostic and utility menus allow testing, verifying, and even erasing the hard disk without a host computer. 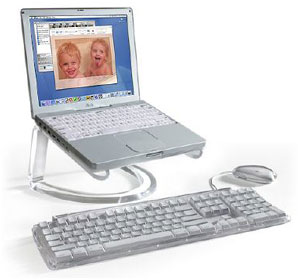 Griffin Technology has introduced its newest Mac accessory, the iCurve. The iCurve is a clear laptop standdesigned specifically for Apple’s PowerBook and iBook computers. Its main purpose is to place a PowerBook or iBook in an ergonomically correct position when using the laptop as a desktop computer. It achieves this goal in several key ways.

When positioned on iCurve, a PowerBook screen is raised to a height of 16 inches. This is the recommended height for computer screens as specified by the TCO 95 ergonomic standards. It greatly reduces neck strain caused by looking down at your laptop screen for extended periods of time.

The iCurve elevates an iBook 4″ above the desk surface – freeing up significant space for a full size keyboard and mouse. Although you can type directly on a laptop while it rests on iCurve, the addition of a full size keyboard and mouse makes for the most comfortable and healthy desktop experience. This also allows your laptop screen to be positioned the recommended distance – an arm’s length away.

Other highlights of the iCurve include:

The iCurve is priced at $39.99 and will begin shipping in September. Pre-orders are being accepted now.

The USB version supports USB 2.0 and is also backwards compatible with USB 1.1, which is on virtually every computer shipped in the last three years.

In the U.S. and Canada, NanoGB may be purchased from dealers. NanoGB is also available directly from WiebeTech or from WiebeTech’s distributor, Dr. Bott.

T3Hub is the first USB hub to pick up the design of the new generation of portables from Apple.

Typically T3Hub will be used when the internal USB connections of the computer no longer satisfy the needs of a growing array of USB peripherals.

T3Hub is available in the colors Ice (iBook 2001), Titanium (G4 PowerBook), and also in the already classical translucent Graphite.

is on a notebook. In either setup T3Hub will expand a single USB port on the computer into 3 USB ports. T3Hub plugs directly into the USB connector on the computer. An optional USB extension pigtail is provided to reduce strain on the built-in port.

Like all mobile USB hubs, T3Hub cannot be connected to another non-powered hub such as the hub that is integrated into every USB keyboard for the Mac. As a result, T3Hub is always connected directly to one of the computer’s built-in USB ports.

This Knowledge Base article explains how to install additional memory in a PowerBook G4 computer. You may also view the procedure in QuickTime at http://www.info.apple.com/installparts.

The only tool required for this procedure is a jeweler’s flat-blade screwdriver.

There are two different versions of WallStreet running at 233 MHz, the cacheless MainStreet version and the later Series II with a level 2 cache. It’s not always possible to determine from the vendor’s listing which is being offered, so we’ve included links within this paragraph to the two models. The same goes for the PowerBook G4/667 (Gigabit Ethernet) and G4/667 (DVI).