Back in 2007, my 300 MHz 1999 Clamshell iBook’s usefulness was questionable, but that’s definitely not the case now, thanks to the CompactFlash-IDE drive I installed. Almost every application in OS X 10.3 Panther loads within 20 seconds (most within five or ten seconds), and in Mac OS 9, everything loads even faster.

You’re probably wondering how stable the system is and how applications are performing overall. I don’t have exact numbers to give you in these regards, but there are a few numbers I can give you.

Xbench in Panther was able to provide me with an accurate measurement of my iBook’s performance, and the story the benchmark tells is an interesting one.

If you go down the list of various tests, you’ll notice the overridingly modest performance of the iBook against other Macs of its day (compare it to the Blue & White Power Mac G3 and G4 Yikes!, the iMac G3, and the Lombard and Pismo PowerBooks). At its low price point, it was a big star in the education field, and most iBooks I’ve seen on eBay are former school laptops.

Go down to the very bottom, however, and a very different story unfolds. Under the subcategory “Random” are two tests labeled “Uncached Read”, one in 4 KB blocks, the other in 256 KB blocks. Both are unusually high for an iBook, but this should be no surprise – that’s the area in which the CF (Compact Flash) card shines

Most application and file reads are random reads, so the faster a drive performs these operations, the faster the computer will appear to run. This is the secret behind the quickness of the MacBook Air and the iPad – most of their “power” is manifested in the speed with which they can load apps and files. What’s really fascinating is a comparison between the original MacBook Air and my iBook.

As you can see, the iBook is half as fast as the MacBook Air with an SSD for uncached reads – quite a feat for a laptop from 1999. Also, you have to consider that it’s not the CF limiting the iBook’s speed, but its 33 MBps ATA-2 bus. A Pismo equipped with an SSD would be a sight to see, thanks to that PowerBook’s 66 MBps Ultra ATA-66 bus. Oh look, here’s one.

The Pismo’s SSD beats out the MacBook Air’s by a small margin, but perhaps more shockingly, the older PowerBook is better at rendering OpenGL than the MacBook Air.

Warned about potential problems that could result from using the CF for virtual memory, I’ve been avoiding Panther as much as possible (you can’t disable virtual memory in OS X), instead choosing to use Mac OS 9. However I did test Camino in Panther, and I can confirm that it runs much better with the CF than it did with the original hard drive. Microsoft Office 2004 was unchanged. 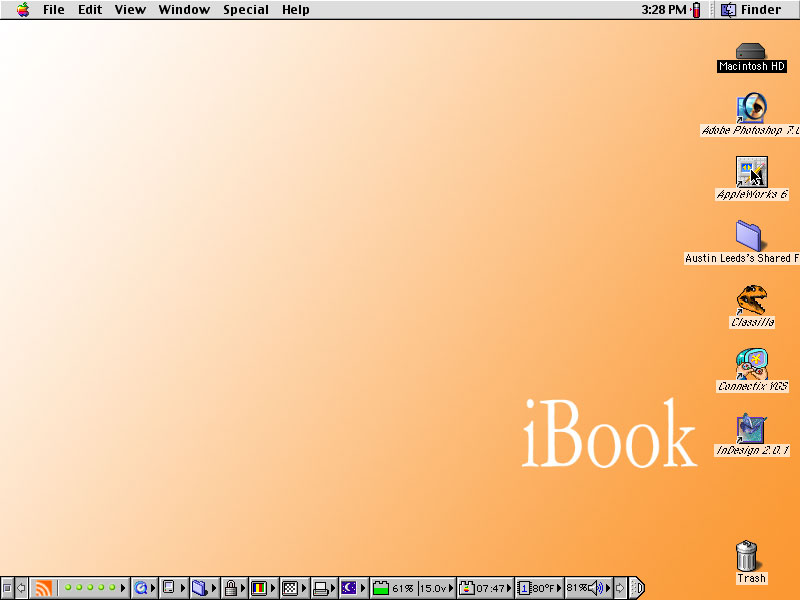 All of the applications tested below have been tested in Mac OS 9. My iBook has 320 MB of RAM installed.

Photoshop and I have been unstoppable partners for a while, both in its CS4 revision and in the OS 9-compatible version 7. One thing that plagues Photoshop’s performance on older machines is a slow scratch disk – I think you can see where this is going.

Boosted by the speedy CF in my iBook, Photoshop 7 has seen a major speed improvement overall, rendering effects and working with files much faster than before.

God bless the Classilla developers – they’re the only people who stand between Mac OS 9 and total obsolescence.

Classilla’s performance with a CF is unchanged (except for some minor boosts when it comes to writing offline data). Still, it’s usable for loading most web pages, although it does lag a little when loading big sites like Engadget.

Under Panther, the OS X version of SNES ran Star Fox slowly, but the classic version has been much more usable. Star Fox runs mostly trouble-free, except for the music slowing down in polygon-intensive areas, and Final Fantasy V runs perfectly.

Since SNES game files are small enough to load into RAM, there isn’t going to be much improvement seen here. One area the CF helped was battery life – since the hard drive runs all the time for SNES9x otherwise, the low-power CF has greatly improved battery life while gaming.

Ah yes, the controversial PlayStation emulator. How does it run with the iBook? Quite well, actually. Other than some slight jerkiness, Tony Hawk’s Pro Skater 4 and Cool Boarders ran almost as if they were running natively on our PSOne.

I figured these applications would see the most change from the CF upgrade, and, for the most part, they’ve been running pretty well. Photoshop 7 is definitely a success story with the CF, and any hard drive intesive application should benefit from the CF.

Here are the list of applications I’ve been running on the iBook that have been performing well, but are otherwise not noteworthy:

Here are some applications that I was either unable to get running or that did not work well with the iBook:

No, the iBook can’t play YouTube videos – at least not natively. However, YouTube videos converted into Quicktime .mov format by online-convert.com will play just fine on the Clamshell iBook. Now, if only there were an application that could perform the conversion automatically.

Remember how I said the iBook would get about 10 hours of battery life? That was in Panther, and as it turns out, Mac OS 9 is much more power efficient, bringing the time up to a whopping 12 hours (provided you aren’t doing too much heavy work on it).

It’s been a great experience working on this old iBook, and I’ve been so pleased with it that it has now replaced my iPad as my writing and photo editing machine (don’t feel bad, iPad, you get to do everything else).

Sure, I could have bought an OWC Legacy SSD, or I could have maxed out my RAM, but in keeping with Low End Mac (LEM) fashion, I decided to upgrade my iBook within my current means, and the result was simply extraordinary. To see an unused, slow, nearly worthless laptop turn into a long-running, quick-loading light production machine is one of those little joys of being a LEM-er.

In fact, it’s been so fun transforming this iBook that I’m about to do it again! I’ve purchased another tangerine iBook on eBay and am anxiously awaiting its arrival so I can start resurrecting it as well. Feel free to email me if you’d like to purchase it or commission another Mac for me to resurrect, upgrade, or repair – I’ve got a bunch of Apple service manuals that have been itching to be used.

Publisher’s note: Austin has been busy making color coordinated gradient wallpapers for the iBook in key lime green, indigo, graphite, blueberry, and tangerine (below). Go to the Low End Mac group page on Facebook to download them.