Back in 2006 when Apple switched from PowerPC to Intel, I was at the forefront. It would be the last time for a while that I owned a current Mac.

In February 2006, I bought a 17″ 1.83 GHz Core Duo iMac. Coming from a 1 GHz G4 eMac, this speed jump was amazing, not to mention the space saved on my desk and the difference in weight. The eMac was lovely but it was pretty burglar proof, due to it being incredibly heavy (50 lb.).

Unboxing my new shiny iMac was a major thing in my house. The box wasn’t much bigger than the machine itself, which added to the thrill of opening it. After a few minutes of setting up – which comprised of plugging it in, attaching the supplied super-white keyboard and mouse, and setting up my user account – I set to using my new Mac. I didn’t bother copying my applications, files, and preferences with Migration Assistant, as I wanted a fresh start.

A few minutes later I was sitting in front of my super-slim, super-new, super-fast iMac with an Intel chip inside. I don’t really know what I expected. Jumping architecture was something Apple had done fairly seamlessly before, but it is still a worry – especially being an early adopter. All the software I had been using already had Universal Binary updates, which was lucky.

It Just Flew – at First

My iMac came with Mac OS X 10.4 Tiger, and it flew along compared to Tiger on my eMac. The iMac came with 512 MB of system memory and was shortly upgraded to 1 GB – this too made a massive improvement.

General tasks and Finder speed wasn’t much faster; it was when you got into processing audio files or compressing video where the power of the new Intel chip and the increased processor speed really came into its own.

Music files on my G4 eMac would encode at around 8x; the same file on the new iMac would encode at around 45x! That saved a massive amount of time. I had a music collection from varying sources and at varying bit rates, with a lot of them a 320 bit rate. I had wanted to sort out, organise, and re-encode for a while, but my eMac would have taken too long. This was the ideal situation to test the power of my new iMac. After dropping them all into iTunes and tidying up the ID tags, I set it off to re-encode at 128 bit rate. This thing flew threw them, encoding each MP3 in a matter of seconds, and within a few hours it had done the lot.

Apart from upgrading the RAM from 512 MB to 1 GB I did nothing to this Mac for a long time. I used it, and used it well, pushing it every day.

Mac OS X 10.5 Leopard was released in October 2007, and shortly after Christmas that year I purchased it and upgraded. This is where I ran into problems. Initially I chose to “upgrade” my OS, and partway through it failed.

Then I went for a fresh clean install, and it worked, but Leopard really suffered from lag and the “spinning wheel of death”. This got better with the 10.5.1 upgrade (already released by the time I had upgraded to Leopard) and even better with 10.5.2. RAM also seemed to be a problem, and upgrading to 2 GB helped a lot.

This is a major concern of mine. I have run Leopard on PowerPC Macs – some of which max at 1 GB. My current iBook G4 maxes at 1.25 GB RAM, and it runs Leopard marvelously well, so I was a bit miffed that a spangly new Mac with a super-fast processor and system bus couldn’t run Leopard too well with 1 GB of RAM.

The Slow Death of My Intel iMac

In March 2008, the iMac started having problems. The SuperDrive started to fail, becoming very finicky about what discs it would read or write. Then it failed altogether; it wouldn’t even show up in System Profiler.

Not a huge problem. I hardly ever use an optical drive, and I had an external USB one kicking about. However, shortly after that the iMac wouldn’t boot from the internal hard drive. This started alarm bells ringing in my head. Both internal drives failing was not a good sign.

I had an external 10 GB USB drive, on which I reinstalled Leopard, but I could not access my old hard drive. It was dead, no noise, no movement, and nothing detected in OS X. 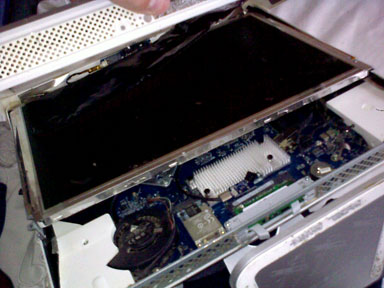 Inside the dead Intel iMac.

The end was near. A few weeks of running the Mac from an external drive and it would not boot at all. It would turn on sometimes and just the sleep light would flash. Other times it would turn on and the fans would just come on at full blast. A few days of this and then nothing: dead, no noise, no lights, no fans.

Back to PowerPC Macs

Luckily, I wasn’t totally without a Mac. As lovely as the iMac was, I had in the meantime had a couple of PowerBooks at the same time. One was a Lombard PowerBook G3, and then I had 400 MHz PowerBook G4. This kept me online and in the Mac world, but it would be the end of the Mac market that I would sit at for a long time.

I was not in a financial position to purchase a new Intel Mac, so I picked up a Sawtooth Power Mac G4 as a desktop replacement, then a 1.25 GHz eMac (funny how things come around again), then finally sold both the eMac and my PowerBook and upgraded to an 867 MHz Titanium PowerBook, which I used for a long time.

The whole Intel iMac experience has put me off, and I lost a lot of faith in Apple computers. I opened up the Intel iMac to have a look, and it was horrible mess with the smell of burning and black marks all over the internal components.

All this happened just two years after purchase. A little disappointing, to say the least. The problem with your machine not booting and just the fans coming on was a problem others saw, as well as G5 iMac owners – obviously a design problem with the machines been pushed hard and must have been down to heat.

First generation Macs always seem to suffer from problems; these are resolved with future releases and tweaks.

With the rapid demise of the PowerPC platform, I am going to have to jump to Intel soon, and it is always a worry, but one I have no choice about.