That was the theory at least, and particularly in the G3 era, RISC-based Macs smoked Pentium-based PCs at similar clock speeds. But that wasn’t enough for Motorola, which wanted to add a powerful vector processor to PowerPC. Motorola dubbed the technology AltiVec and incorporated it into the G4 CPU.

Apple announced the first G4 Macs on August 31, 1999, giving Macs a real leg up on the competition – and a serious boost over the G3 for things like processing images and video. By government standards of the day, the G4 was classified as a supercomputer and fell under export restrictions.

IBM did not cotton to the idea of a velocity engine and continued to build G3 CPUs, eventually pushing them to the 1.1 GHz mark, but Apple went with the G4 in its professional lines (PowerBooks and Power Macs), eventually moving consumer models (iMacs and iBooks) to the G4 as well.

Problem was, Motorola was falling behind on clock speed, so Apple convinced IBM to develop its own PowerPC CPU with a velocity engine, which went on to become the G5 – but that’s another story.

The G4 continued as the brains of PowerBooks, iBooks, and the Mac mini until they were replaced by Intel models in 2006, and some of Apple’s most original designs (the iMac G4, Power Mac G4 Cube, and Mac mini) were built around it.

Simon Royal (Tech Spectrum): The G4 was a massive leap in power over the G3.

I have owned a number of first gen PowerBook G4 (400 and 500 MHz) models, and the speed and design over the PowerBook G3 Pismo was amazing. So thin, so sleek, so gorgeous. The 400 MHz ran so hot, you could replace you home heating with them; the 500 MHz was a little better – both fabulous machines.

I owned a Power Mac G4 Sawtooth – the “better” version of the original G4 tower (the Yikes model featured a G4 chip on a G3 board). Coming from a Blue & White G3, which was amazing, the G4 tower was blinding such a massive improvement.

The G4 chip and machines brought a new range of super stylish and super fast computers. Midrange G4s are still very capable machines today, and a true testament to how great they still are. 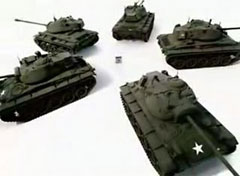 Dan Bashur (Apple, Tech, and Gaming): The one thing I’ll never forget about the first Power Mac G4s was how they were touted as a “supercomputer” by the US Government. One of Apple’s ads (posted on YouTube) depicts this in a humorous way (and gives a jab to Intel Pentium PCs).

Speaking at the jab at Intel, is was so ironic how many comparisons these early G4 machines continued to draw against similar Intel hardware. There always seemed to be a MHz race until Apple deployed PowerPC G3 and G4 processors, which were at least 40-50% more powerful than the Intel equivalent at the same MHz rating. The G4 with AltiVec instruction set added to the G3 processor really pushed the Mac over the top in terms of audio and video/graphics processing, and to me it signaled a time when Apple was totally on top of the graphic design and video production world.

I remember using early G4 Power Macs at Ohio State (there were only a few on campus in one lab), and I was just wowed by the performance over the Blue & White G3 machines I used consistently in another lab (this was a bit before I got my Summer 2001 Graphite iMac G3). When it came to rendering web pages and handling videos and games, the G4 with its Altivec clearly has a huge advantage over a similarly clocked B&W.

It’s hard to believe that this was 13 years ago and began an era that technically ended just a little over six years ago when the final 2005 1.42 GHz eMacs were sold to educational institutions.

An early G4 can still be a capable machine today – especially AGP models (provided a CPU upgrade and graphics upgrade). You can technically have a 12-year-old Mac that is still competent today. The earliest PCI models (code named Yikes!) are limited to PCI graphics upgrades, but they can’t run Leopard, since it requires AGP graphics.

Looking back on that time period and how long the G4 lasted, it’s easy to see why the G4 was one of Apple’s finest achievements.

Dan Knight (Mac Musings): Apple introduced two different Power Mac G4 models that day, the 400 MHz Yikes! model based on the same logic board as the Blue & White G3 – same PCI slots, same memory, same ATA/33 drive bus, etc. The faster Sawtooth model had a faster memory bus, used AGP for video, and had an UltraATA/66 drive bus, making it about 20% more powerful at the same CPU speed (see comparison of both models at 400 MHz on Bare Feats) – and Sawtooth had to wait for faster hard drives for that twice-as-fast drive bus to really matter.

The biggest problem was that Motorola couldn’t produce G4 CPUs in the speeds and quantities Apple needed, the 500 MHz model didn’t ship until the following February, and Apple really ended up with egg on its face when it reduced speeds by 50 MHz on October 10 – with no reduction in price. On the plus side, Apple discontinued the Yikes! model on December 1, replacing it with a 350 MHz Sawtooth.

As if a 500 MHz CPU with AltiVec weren’t enough, on July 19, 2000, Apple unveiled the “two brains are better than one” Mystic Power Mac G4, its first models with gigabit ethernet and the first with dual G4s. Although Mac OS 9 couldn’t take advantage of the second processor, Photoshop and some video apps did, making it a hot choice among power users. And when OS X arrived, the power of that second processor was finally unleashed.

Having used both single- and dual-processor G4 Power Macs, I’ve found that two processors really makes OS X run more smoothly. If you use Classic Mode on a single CPU Mac, you know how it can pretty much take over the whole system. With two CPUs, Classic can take over one but won’t touch the other one, a real plus in my book.

The Mystic wasn’t Apple’s first dual-processor Mac, but it was the first in a continuous line of dual-processor (and later dual-core) Macs that remain with us to this day.